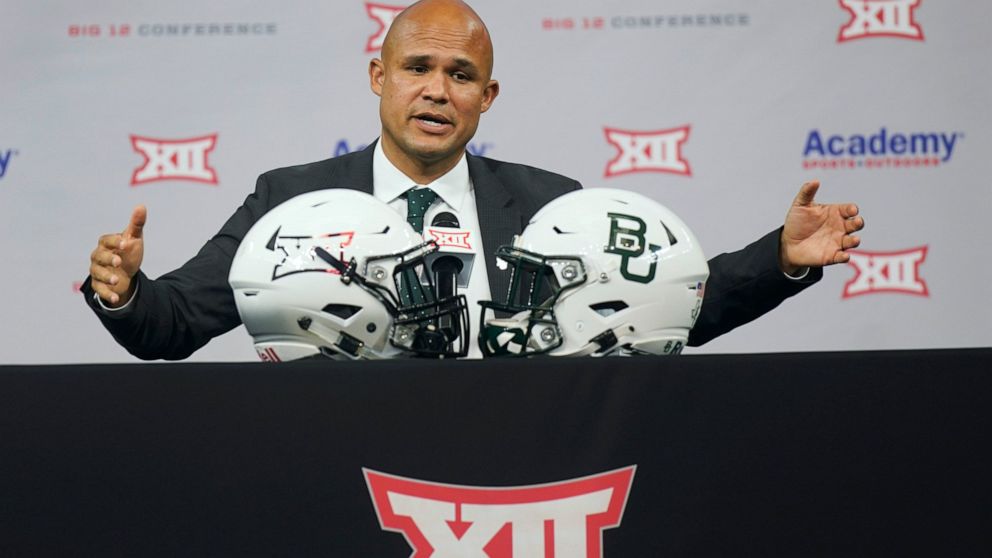 It had been much longer for athletic director Mack Rhoades, who found “an institution and athletics department in turmoil” when he took over five years ago in the wake of the revelation of a sprawling sexual assault scandal that cost two-time Big 12 champion coach Art Briles his job.

With the NCAA case against the Bears finally resolved, and without any major program-crushing penalties, they can move forward without that lingering unknown.

With no players or coaches remaining from Briles’ tenure, Baylor was placed on four years of probation, but could still play in a postseason bowl game. There will be recruiting restrictions in place for Aranda and his staff during the 2021-22 academic year, including a reduction of 30 official visits and a three-week ban on unofficial visits.

The penalties could have been much worse considering the scope of the allegations, but the actual mishandling of sexual assault claims by Baylor was deemed out of the NCAA’s jurisdiction.

Aranda knew about the case when he took over at Baylor in January 2020, fresh off a 15-0 national championship as LSU’s defensive coordinator. He attended the school’s two-day virtual hearing with NCAA officials last December, four years after the school received a notice of inquiry from the NCAA enforcement staff.

“I was at the trial in December, so listening to it and just hearing the details and being part of it gave me greater insight to it, and I was able to put myself in a lot of people’s shoes. I spent most of my time on that,” Aranda said.

The NCAA did find secondary rules violations that occurred between 2011 and 2016, including impermissible benefits for a player who failed to follow an academic performance plan following an academic violation. There were also a predominantly female student host program that improperly operated outside of recruiting protocols.

Rhoades and Aranda met with the team on the middle of the field during practice Wednesday, after the penalties were revealed. The AD kept what was said between them private, but said he was proud of the players.

Aranda described what Rhoades said as “very focused and very on point,” calling it a strong moment for the team just more than three weeks before its Sept. 4 opener at Texas State.

“There’s a lot of lessons to learn from it,” Aranda said. “I’ll continue to meet with the team as we move forward.”

The Bears went 2-7 in Aranda’s debut season, which came without the benefit of spring drills last year because of the pandemic.

Baylor hired Aranda after Matt Rhule left to become coach of the NFL’s Carolina Panthers. The Bears went from a 1-11 record in Rhule’s 2017 debut season to 11 wins and their only appearance ever in the Big 12 Conference championship game in 2019.

Jim Grobe had come out of semiretirement to serve as interim coach for one season after Briles’ dismissal in May 2016, leading the Bears to a 7-6 record with a Cactus Bowl victory.

Aranda said a primary focus for the Bears will be for each player to be a better person.

“The harder things get, the more pressurized things get, the more stress you’re under, in those circumstances is when you need to be your best,” he said. “That would be tied to the integrity of who you say you are off the field. On the field, you would play as a representative of that standard. … It’s tough to do, easy to say.”