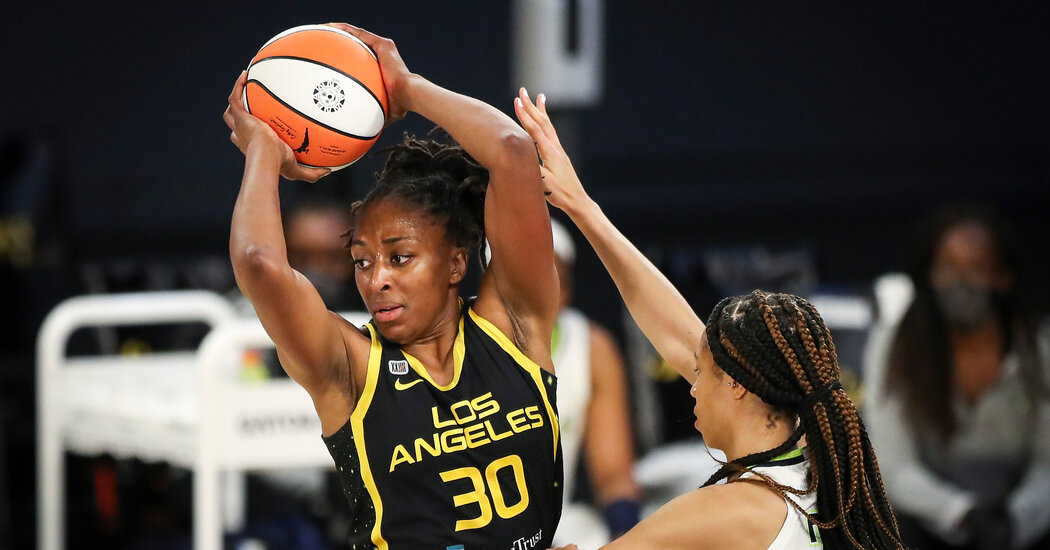 Basketball fans can see plenty of Nneka Ogwumike on the big and small screen this summer. She’s a member of the villainous Goon Squad in the film “Space Jam: A New Legacy,” which premiered Friday. And she’s featured in the ESPN documentary “144,” which chronicles life inside the bubble last season for the W.N.B.A.’s 144 players.

But one place Ogwumike may not be seen is on the court at the Tokyo Olympics, unless FIBA, the sport’s international governing body, grants an 11th-hour appeal in a dispute over which national team she can play for.

After Ogwumike was denied a spot on the U.S. team, a decision that stunned the basketball world, Ogwumike and her sister Chiney, both of whom are former No. 1 overall draft picks in the W.N.B.A. and are Nigerian-American, applied to compete for Nigeria.

FIBA denied Nneka’s request, citing her “significant involvement” with U.S.A. Basketball. Chiney Ogwumike, who has spent significantly less time with the U.S. national team, was cleared to play for Nigeria as a naturalized citizen.

Erica Ogwumike, another sister of Nneka and Chiney and a former standout at Rice who is now in medical school, was allowed to play for Nigeria with no conditions.

Nneke Ogwumike, who was still out with a knee sprain when the selection of U.S.A. Basketball’s team was announced, is the only winner of the W.N.B.A.’s Most Valuable Player Award who has not made an Olympic squad.

The Ogwumike sisters, who were born and raised in Texas, have dual citizenship because their parents, Peter and Ify, were born in Nigeria.

“I teased Nneka and said, ‘Hey you guys play for Nigeria, call me up, and I’ll coach,’” said VanDerveer, the coach with the most wins in women’s college basketball. “There could not be a better player to have on your team than an Ogwumike. They are absolute winners. I never had a bad day coaching either one of them and I was tough on both of them. They are just incredible people and incredible players.”

In and beyond W.N.B.A. circles, the sentiment is the same.

“I think Nneka deserves whatever she sets her heart out to do whether it’s continuing with U.S.A. Basketball in the future, or the Nigerian national team,” said Sue Bird, who is playing in her fifth Olympics. “There is nobility in either way and if you know Nneka she’s going to follow her heart, it’s going to have all good intentions and it’s going to be the right move for her and I think all of us support that no matter what.”

FIBA’s denial of Nneka’s request is a tough pill for the family to swallow. Despite giving so much to the U.S. national team, she may be watching both teams compete from home.

Ogwumike’s appeal is based on the governing body’s regulations which allow exceptions “in the interest of the development of basketball.” Nigeria is currently ranked No. 17 in the world and the addition of the Ogwumikes would make the country a medal contender, said Dawn Staley, the coach of the U.S. team. It would also give a continent that has never won an Olympic medal in men’s or women’s basketball a huge boost.

“I hope FIBA allows her to play because of how much she’s given to the game and how hard she worked for it,” Staley said. “I hope she’s able to check off being an Olympian on her list.”

There is not much time, however. The U.S. and Nigeria meet in an exhibition game on Sunday in Las Vegas and in the women’s basketball Olympic opener on July 27. The players’ lawyer, Howard Jacobs, has also filed a petition with the Court of Arbitration for Sport, the final arbiter on global sports disputes, in case FIBA doesn’t change its initial ruling.

FIBA has a history of clearing American players to compete for other countries, such as Becky Hammon for Russia and Courtney Vandersloot for Hungary, though neither spent as much time with the senior national team as Nneka Ogwumike has done with the United States.

Ogwumike, 31, has been part of U.S.A. Basketball for nearly half her life. She was voted M.V.P. of the 2020 Olympic qualifying tournament, was second on Team USA in scoring and rebounding from 2019-20 and attended every Team USA training camp the past several years. Many believed she should have made the Olympic team in 2012 and 2016.

Staley, who is not part of the five-player selection committee, said a left knee sprain, which Ogwumike sustained on June 2, was the reason she didn’t make the squad. However, based on the recovery timeline from the injury, Ogwumike is expected to be healthy for Olympic competition. The prognosis was similar for Diana Taurasi, who missed nearly a month with a sternum fracture and recently had a hip injury which kept her out of the team’s exhibition game on Wednesday, but was still selected to compete in her fifth Olympics.

Current and former W.N.B.A. and N.B.A. players and coaches expressed their outrage on social media and in interviews after the U.S. team was announced. Some criticized the influence the University of Connecticut has on the roster.

Candace Parker, a two-time Olympian who removed herself from national team consideration after being left off the 2016 team, addressed the situation, saying, “How many times are we going to say it’s not politics? I think we all know that.

“That’s why I’m commentating in Tokyo,” she added, referring to her role as part of NBC’s broadcast team for the Olympics.

Geno Auriemma, the coach of UConn’s women’s team, is a member of the selection committee and coached the Olympic team in 2012 and 2016. Five former Huskies made the current 12-person squad, including Bird, Taurasi, Breanna Stewart, Tina Charles and Napheesa Collier.

Pointing out he is no longer the coach, Auriemma added: “Wherever I am, that’s whose fault it is if you don’t like whoever is on the team.”

VanDerveer said he doesn’t believe coaches should serve more than one Olympic cycle or be a continual part of the selection process.

“I don’t think any one person should have that much influence or control or power in making decisions,” VanDerveer said. “Because then things become skewed. It’s U.S.A. Basketball and it has to represent the United States.”