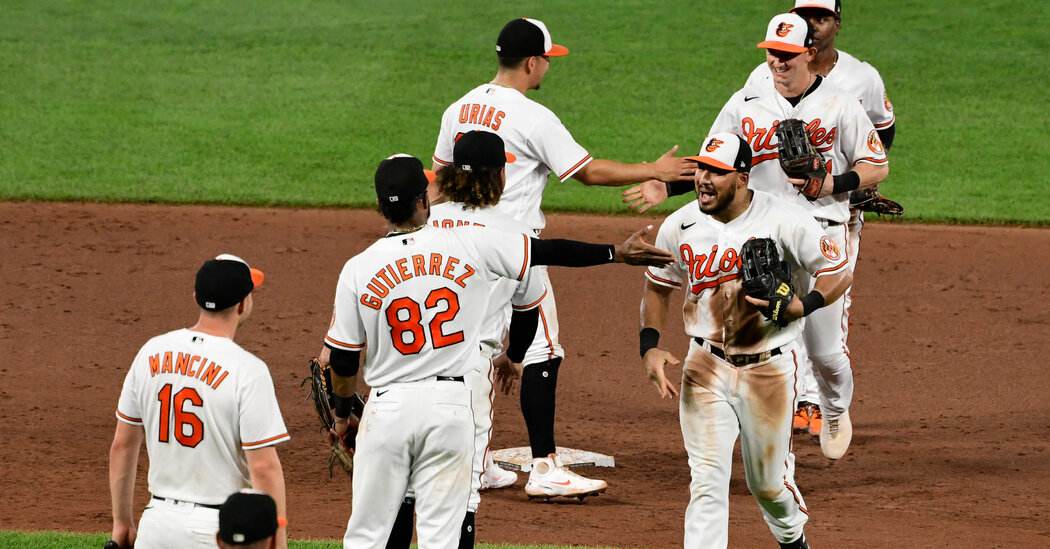 Sitting in his office at Camden Yards ahead of Wednesday’s game, Brandon Hyde, the manager of the Baltimore Orioles, smelled something unusual. Over the past three weeks Hyde had been consumed with ending his team’s ignominious losing streak, which had reached 19 games.

So Hyde hopped up and stepped into the hallway connecting his office to the players’ clubhouse. There he ran into first baseman Trey Mancini, 29, the longest tenured Oriole.

“Are we smoking some different type of cigarettes?” Hyde said. “What’s happening in our clubhouse?”

His players weren’t smoking cigarettes or anything stronger than that. They were burning sage, and parading it through the clubhouse, the dugout and the field in hopes of, as Mancini put it, switching up the mojo.

“It smelled kind of weird,” center fielder Cedric Mullins, the Orioles’ lone All-Star this year, said in a postgame video conference with reporters. “But the sage kicked in.”

It certainly did, as the Orioles, the worst team in baseball (39-86 entering Thursday’s action), finally ended their misfortune. Not only did they smash three home runs off the Los Angeles Angels superstar Shohei Ohtani, the front-runner for the American League Most Valuable Player Award, but they mounted a stirring comeback. At one point trailing by 6-2, the Orioles scored five runs in the eighth inning on the way to a 10-6 victory that felt like so much more.

“It’s electric in there,” Mullins, 26, said of the scene in the clubhouse after the victory. “I know it looked like the big 2-0 today,” he added later, referring to the possibility of a 20th straight loss, “but we fought back.”

The Orioles haven’t had much to celebrate this season — or really over the last several years. Their last winning season was in 2016. They are on a pace to lose 111 games, and may become the first team since the expansion Mets in the 1960s to lose at least 108 games in three consecutive nonabbreviated seasons. They are deep into a total rebuild that still feels years away from netting a contender.

The players and coaches on the team know that, but that doesn’t make 19 consecutive defeats, many in lopsided fashion, any easier to stomach.

“We’re tired of hearing it and tired of seeing it on TV,” Hyde said. “Everybody is tired of it.”

So a few days ago, Mancini said he and his teammates vowed to find something, anything, that could help change their energy. Bearded all season, Mullins had recently shaved. Mancini tried a variation of that tactic: He got rid of everything except his mustache, which his girlfriend doesn’t like and he hates.

“It was kind of a form of self-punishment, but also trying to keep things a little lighter,” Mancini said. “I told all the guys that I was going to shave it off whenever we won.”

It was catcher Austin Wynns, 30, who came up with the idea of burning sage, which is used as a cleansing ritual in some cultures. So, according to Mancini, Wynns bought some online and had it shipped overnight. They lit it on Wednesday afternoon.

“I thought it was like a Pedro Cerrano move out of ‘Major League,’” pitcher Chris Ellis said, referring to the superstitious slugger in the 1989 comedy film. “It was pretty funny. I was just sitting at my locker just going over the lineup for the day and I saw Trey Mancini walking through there with a bunch of sage and everybody was getting a whiff of it.”

Mancini said he and Wynns “walked around the ballpark and just saged everything we possibly could.” He added: “We took a good 15 minutes to just walk around and made sure that we took our time and did it right. And yeah, it worked.”

At first, it didn’t seem as though it had. Right fielder Anthony Santander and Mullins smashed solo home runs off Ohtani in the first inning, but Baltimore’s porous pitching staff coughed up the lead and the Orioles trailed, 6-2, in the fourth.

The Orioles chipped away, however, with two runs in the bottom of the fourth and another in the seventh. Along the way, the Orioles became the only team to hit multiple home runs off Ohtani in a game this season.

Down by 6-5 in the eighth inning, the Orioles scored five times against the Angels’ bullpen. Ramon Urias walked with the bases loaded to tie the score, 6-6, and Kelvin Gutierrez did the same to send in the go-ahead run. Austin Hays delivered a two-run double that put the Orioles comfortably ahead.

“It felt like postseason pressure. I’ve never experienced a middle-of-August game with a couple teams that aren’t in the postseason hunt with so much,” Hyde said, his voice trailing off as he tried to find the right words. “There was tension in our dugout.”

A fair number of the 15,867 people in attendance remained and cheered, happy to see their lowly team’s losing come to an end for at least one night. “NOBODY BEATS THE ORIOLES 20 TIMES IN A ROW!!! NOBODY!!!” a fan at Camden Yards wrote on Twitter. (Of course, in reality, the Orioles lost a franchise record 21 straight games in 1988.)

After the final out, the Orioles celebrated for the first time since Aug. 2. In the clubhouse, Mancini kept his word and buzzed off his mustache. Hyde said the loud postgame locker room was full of people who were excited and relieved. “It’s good to hear our guys feel good about a game they just played,” he said.

As far as the burning plant that set the stage for the win, Hyde admitted he actually liked its scent. He added, “Sage tomorrow?”