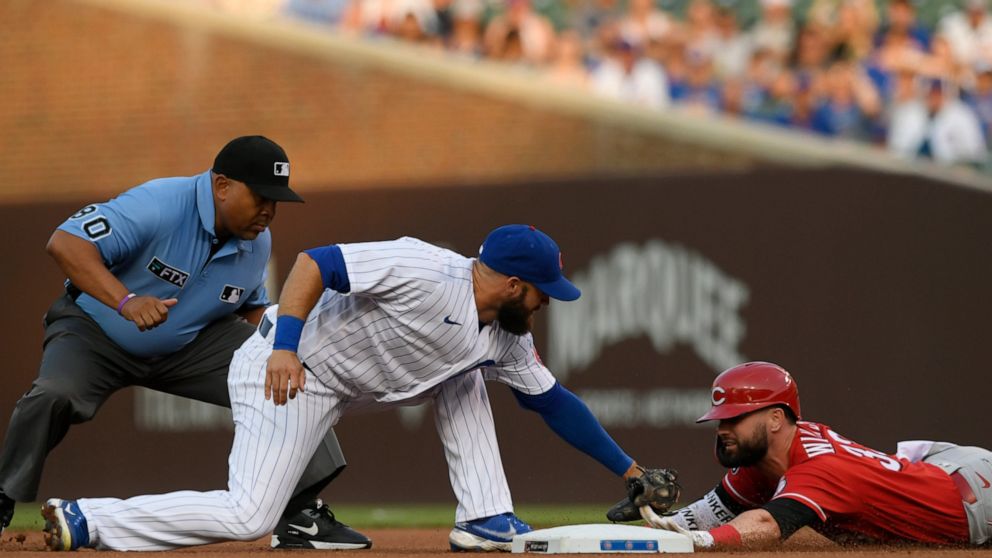 CHICAGO — Pinch-hitter Javier Báez hit a bases-loaded single in the bottom of the ninth inning to give the Chicago Cubs a 6-5 win over the Cincinnati Reds on Monday night.

Anthony Rizzo homered in his second straight game for the Cubs, who opened what could be the final homestand for some of their stars. Rizzo, Kris Bryant, Craig Kimbrel and/or Báez could be on the move by Friday’s trade deadline.

Joey Votto homered for the third time in three games and drove in three runs for Cincinnati, which dropped its second straight and lost for the seventh time in 10 games. Kyle Farmer added a homer as the Reds’ winning streak against Chicago ended at four.

Patrick Wilson walked after a nine-pitch at-bat to start the bottom of the ninth, pinch-hitter Ian Happ drew a pass an out later and Nico Hoerner loaded the bases when he was hit by a pitch by Heath Hembree (2-5). Amir Garrett came on and allowed the game-winning hit.

Kimbrel (2-3) struck out three straight to end the top of the inning after putting two men on.

The Reds led 5-4 in the bottom of the eighth before Willson Contreras hit a booming home run to center off reliever Josh Osich.

Rizzo drove the first pitch he saw from starter Wade Miley into the right-center bleachers to score Bryant in the first inning. Votto answered in the top of the second with a first-pitch shot to nearly the same spot. He tied the game an inning later with a sacrifice fly.

Farmer homered in the fourth and Votto gave the Reds their first lead an inning later when he drew a bases-loaded walk from starter Kyle Hendricks.

Hendricks, who’d gone at least six innings in 13 straight starts, lasted only 4 1/3 and surrendered the first five runs and nine hits while walking two and striking out four.

Chicago’s Jake Marisnick led off the bottom of the second with a liner that rolled all the way to the left-field corner and kept motoring around third when Cincinnati’s Jesse Winkler still hadn’t come up with the ball. Home fans groaned, however, when Marisnick was forced to settle for a ground-rule double that got sufficiently lodged in the mid-summer bushes.

Miley retired the next three Cubs to strand him at second.

Reds: OF Nick Castellanos (right wrist) could begin throwing and other baseball activities as early as Tuesday, manager David Bell said. The first-time All-Star was placed on the injured list Thursday after an x-ray showed a microfracture. … INF Alex Blandino (right hand) is scheduled to begin a rehab assignment Wednesday night with Triple-A Louisville. … The club recalled LHP Amir Garrett from the paternity list and optioned INF Alejo López to Louisville before the game.

Cubs: Báez started the night on the bench after waking up with a sore left heel. He appeared to suffer some sort of injury after trying to beat out a ground ball late in Sunday’s win over Arizona.