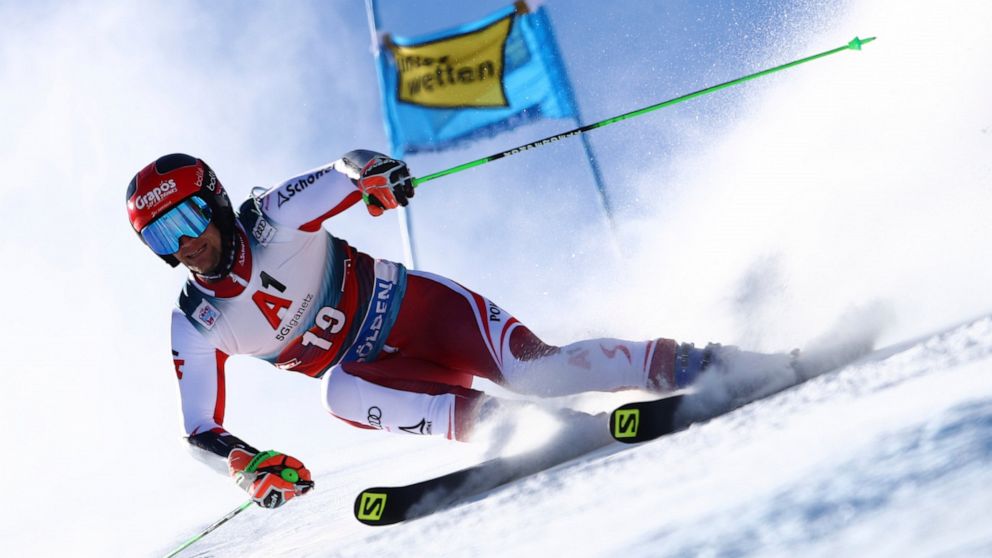 Leitinger, who started 19th, had a clean run to lead world champion Matthieu Faivre of France by 0.19 of a second, followed by Swiss skier Marco Odermatt two hundredths further back in third.

Defending overall and GS World Cup champion Alexis Pinturault had 0.57 to make up in the second leg, while American racer River Radamus impressed with an acrobatic recovery during his run before posting the ninth-fastest time.

While the top-ranked skiers raced on a track that was still partly in the shade, the sun emerged by the time Leitinger started.

“I found the right balance between aggression and control. You cannot go full risk in all those twenty gates in the steep,” Leitinger said.

Leitinger was runner-up to Marcel Hirscher to win silver at the 2017 world championships but has not finished better than sixth in a World Cup giant slalom. However, he got one podium result after placing third in a parallel race in 2019.

If he holds on to his lead, Leitinger would become the first Austrian male skier other than Hirscher to win a GS since Philipp Schörghofer triumphed in February 2011. Record eight-time overall champion Hirscher, who retired two years ago, dominated the discipline for many years, winning the GS season title on six occasions.

Radamus avoided crashing out when his right ski came up high in the air and the American did well to stay on the course and push for a top-10 finish in the opening run.

“I just really wanted to go in the season charging and leave it all out there,” said Radamus, whose best result in GS is 14th in a race in Bulgaria last February.

“I feel like I’ve had the speed in training. And so I am just trying to be more fearless, take it to it more and try to attack. I made a lot of mistakes, but it paid off in the end because I was pushing the limit.”

Radamus was the junior world champion in GS in 2019 but has struggled to replicate those results in World Cup races.

“I felt like too many times last year, I regretted the turns that I didn’t charge as opposed to the mistakes I made,” he said. “I am really proud of my intensity and proud of my effort.”

Radamus attracted attention not only for his skiing, but also for keeping up his tradition of arriving at the season-opening race in Austria sporting a colorful do.

“Just to kick off the season,” he said, pointing to the panther-like colors on his head. “This one is from Chad Fleischer, American great speed skier from years past. So, it’s my tribute to him, it’s cool and it gets a lot of comments.”

Another U.S. ski team member, Ryan Cochran-Siegle, made his return to the World Cup nine months after sustaining a minor fracture of his neck in a crash in Kitzbühel.

Cochran-Siegle finished 31st and missed out on qualifying for the second run by one hundredth of a second.