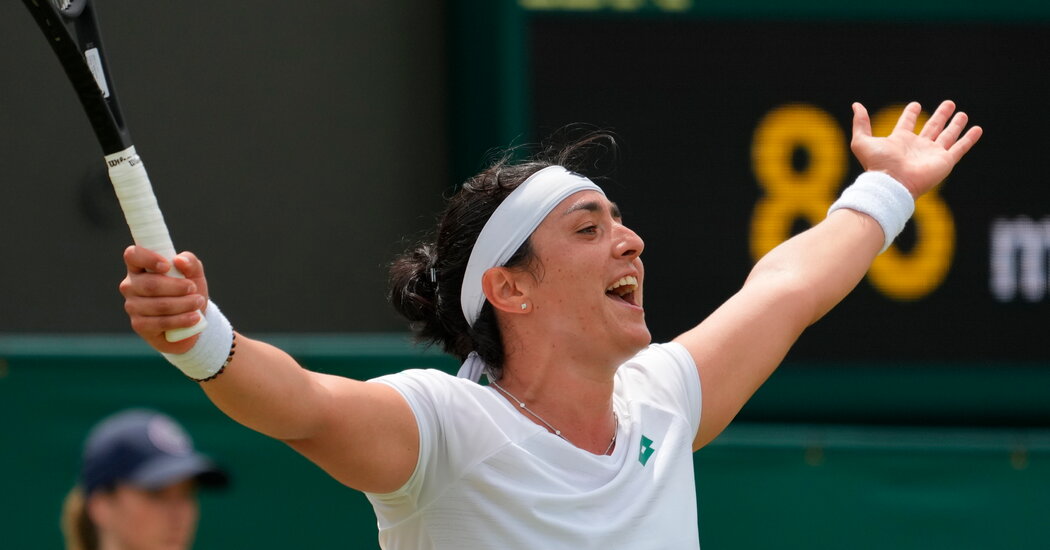 WIMBLEDON, England — For nearly an hour on Monday, No. 1 Court was rocking as Emma Raducanu, an 18-year-old from Britain, continued to make the most of her Wimbledon debut.

She was holding her own from the baseline against Ajla Tomljanovic, a hard-hitting Australian veteran who is 10 years her elder. Raducanu was striking the ball with authority and reveling in the support of the crowd, just as she did all last week.

But after losing the first set, 4-6, and then trailing by 0-3 in the second, she had to leave the court with what tournament officials later described as “difficulty breathing.” She did not return.

There would be no more winners or roars on Monday as Tomljanovic, not Raducanu, advanced to her first Grand Slam singles quarterfinal. Raducanu did not give a news conference or release a statement after her withdrawal.

“I’m really sorry for her,” Tomljanovic said. “I wish we could have finished it, but it’s sport. It happens. I’m really wishing her all the best.”

It was a dispiriting finish to a day full of uplifting women’s tennis stories: Angelique Kerber’s revival, breakthroughs for Aryna Sabalenka and Viktorija Golubic and the latest dazzling displays of power and touch from Ons Jabeur.

It was also a downbeat conclusion to the last Manic Monday — Wimbledon’s annual scramble to conduct all of its fourth-round singles matches after a Sunday of full rest. Next year, that tradition will end, and Wimbledon will become a 14-day tournament, like the U.S. Open and the Australian Open.

But Wimbledon, with its grass courts and its rule about predominantly white clothing, will remain a Grand Slam tournament apart.

Of this year’s women’s quarterfinalists, only Kerber has won a Wimbledon singles title, having defeated Serena Williams in the 2018 final with an inspired performance. After falling in the rankings, she is rising again at age 33. On Centre Court on Monday, she defeated and sometimes bamboozled Coco Gauff, the 17-year-old American who is hoping to follow Williams to the top of the game.

“Everybody who plays her on the scouting report says, ‘Be ready for balls that you don’t think are going to come back to come back,’” Gauff said in a poised and analytical news conference after Kerber’s 6-4, 6-4 victory. “I was impressed by her speed, but it was also expected. I just felt like she played how I thought she was going to play. She just played really well.”

Gauff, who also reached the fourth round at Wimbledon in 2019, struggled to hold serve against Kerber. That was due in part to the breezy conditions but, above all, to Kerber, who put 82 percent of her returns in play. None of Gauff’s first three opponents at this Wimbledon had managed to surpass 67 percent.

“She did a good job of making me compete and making me play,” Gauff said. “I feel like some moments in the match I outhit myself out of the match, and I think sometimes the best decision is just to put the ball in play and see what your opponent can do.”

Kerber will face the No. 19 seed, Karolina Muchova, on Tuesday. In the other quarterfinal from the top half of the draw, the unseeded Tomljanovic will face the top-seeded Ashleigh Barty in an all-Australian matchup. Barty defeated Barbora Krejcikova, 7-5, 6-3, on Monday to reach her first Wimbledon singles quarterfinal.

After retiring in the second round of the French Open with a left hip injury, Barty did not play again until Wimbledon, but she has rebounded convincingly and she is skipping doubles here to put all her energy into singles.

“The rehab between Paris and here in London, we had 22 or 23 days,” Barty said. “We did everything as best we could. I’m feeling great. I’m feeling ready.”

Though Barty has been No. 1 in the world for 83 weeks, she has only one Grand Slam singles title, the 2019 French Open. Women’s tennis feels like an open road at this stage. In the first three Grand Slam tournaments of 2021, a total of 22 women have reached the quarterfinals, with only Barty and Muchova managing to go that far twice.

Because Naomi Osaka won the Australian Open and Krejcikova won in Paris, a different 2021 champion is guaranteed for Wimbledon, as is a first-time Wimbledon singles finalist from the bottom half of the draw.

In the quarterfinals in that half, No. 8 Karolina Pliskova will face the unseeded Golubic, and the No. 2 seed Sabalenka will play Jabeur, who is seeded 21st.

Golubic, 28, a Swiss veteran who has never gone this deep in a Grand Slam tournament, is a rarity in the women’s game, with a one-handed drive backhand. She defeated Madison Keys of the United States, 7-6, 6-3, on Monday, finishing with 28 winners and just nine unforced errors and then kneeling down to kiss the grass to commemorate her victory.

Sabalenka, a 23-year-old Belarusian who punctuates her powerful shots with shrieks, felt as if she was about to burst into tears of relief as she prepared to close out her big-hitting duel with Elena Rybakina. Though Sabalenka has won 10 tour titles and become a fixture in the top 10, she had never been past the fourth round at a Grand Slam tournament.

“I was almost crying, but then I, how to say, cooled down and understood this is not the final goal,” Sabalenka said. “There is a match tomorrow.”

It should be a tough one. Jabeur, the first woman from one of the 22 Arab League nations to reach a Wimbledon singles quarterfinal, is in sparkling form. After eliminating the past Wimbledon champions Venus Williams and Garbiñe Muguruza, Jabeur rallied to beat No. 7 seed Iga Swiatek, 5-7, 6-1, 6-1, on Monday.

Jabeur, a 26-year-old Tunisian, is best known for her deft drop shots, but she often took a more forceful approach against Swiatek, smacking nine aces and responding to the Polish star’s heavy hitting with powerful groundstrokes of her own.

What is clear is that she will face plenty of aggression from Sabalenka.