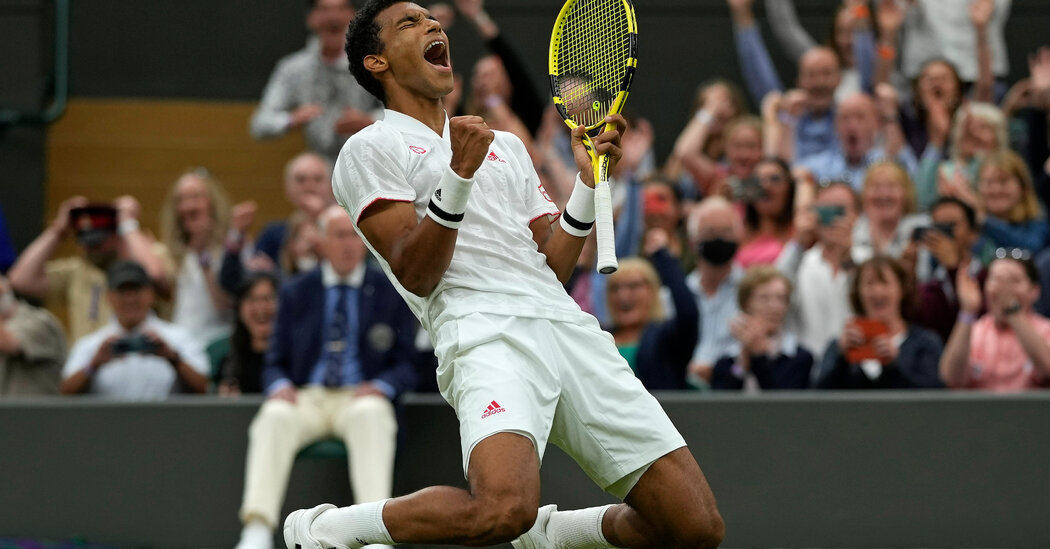 WIMBLEDON, England — As the Montreal Canadiens, Canada’s hope for hockey’s Stanley Cup, faced elimination across an ocean, the compatriots Denis Shapovalov and Felix Auger-Aliassime broke through to their first Wimbledon quarterfinals within hours of each other on Monday afternoon.

Shapovalov, who won the junior Wimbledon title in 2016, strung together two of his best matches in the men’s draw across the middle stages of this tournament. He used the same word to describe his fourth-round win, save for a couple of late wobbles, as he had used after the third round: flawless.

“I played really, really flawless,” the 10th-seeded Shapovalov said Monday after a 6-1, 6-3, 7-5 win over the eighth-seeded Roberto Bautista Agut on No. 3 Court. “Super happy with myself.”

In the third round, Shapovalov used his Centre Court debut to demolish the homegrown hero Andy Murray, 6-4, 6-2, 6-2, a victory so decisive that it left a staggered Murray questioning the viability of his career.

“To beat him in straight sets at a tournament like this, it backs up my level from Andy’s match,” Shapovalov said of his win over Bautista Agut, in which he hit 52 winners to Bautista Agut’s 14. “For sure I’m just happy that I feel like I’m improving every single match. Honestly, it’s been really, really fun out there.”

Auger-Aliassime had also been a heralded junior of whom much was expected, winning the 2016 junior U.S. Open two months after Shapovalov’s triumph at Wimbledon.

After 4 hours 2 minutes of their topsy-turvy tussle, Auger-Aliassime closed out what he called “surely the best victory of my life so far” with an overhead smash on match point, sinking to his knees in relief as he followed through on the shot.

“A great day for us Canadians and hopefully it keeps going,” Auger-Aliassime said.

While Canada soared, its neighbor to the south suffered a surprisingly early sunset at Wimbledon. The United States started with 33 players in the singles draws, but Coco Gauff, Madison Keys and Sebastian Korda all lost fourth-round matches on Monday, meaning that for the first time since 2014, no Americans reached the Wimbledon quarterfinals.

The 2014 edition of the tournament was incidentally a banner year Canada — Eugenie Bouchard reached the final and Milos Raonic made the semifinals.

It has been a jagged path to success for Canadian tennis, however. Both Bouchard and Raonic missed this tournament because of injuries. The fifth-seeded Bianca Andreescu, Canada’s only Grand Slam singles champion, at the 2019 U.S. Open, lost in the first round here.

But Shapovalov, 22, and Auger-Aliassime, 20, made good on the expectations that have preceded both for years.

Even with their potential recognized, there were causes for pessimism for both at Wimbledon. Shapovalov had missed the French Open with a shoulder problem, and Auger-Aliassime lost in the final of the ATP tournament in Stuttgart, Germany, last month, dropping his record in finals to 0-8.

Through wild changes in momentum against Zverev on Monday, Auger-Aliassime bent but did not break. “This match really had everything,” he said. “I had to dig deep physically and mentally. Of course it makes it even sweeter.”

“It’s a dream come true, it’s unbelievable,” he said. “I’m a normal guy from Montreal, Canada, and here I am.”

Though the two men are longtime friends, Shapovalov has a harder-edged outlook, and finds motivation in snubs he felt from the tennis system in Canada as a young player.

“I think proving people wrong is what has made me who I am today,” Shapovalov said. “I was a kid who grew up without the help of a foundation, on my own with my parents literally spending every dollar that they make from work into my career. Always having to prove myself, always not being good enough, not being chosen to teams and places — it’s always been that for me.”

That sensibility has informed Shapovalov’s off-court passion — his rap career. Though he employs hip-hop tropes about expensive cars and drinking Champagne, Shapovalov’s lyrics also take an antagonistic approach to his perceived detractors.

“They all left me on the ground, they couldn’t see what I was worth; now I’m up in the clouds, don’t belong on this earth,” he rapped in a recent song, “Broken.”

Shapovalov admitted that this motivation, drawn from slights by commentators or on social media, was a “constant theme” for him.

“It’s how I keep inspiring myself or keep myself going,” he said. “For sure I’m not a hateful person at all — I don’t think I hold grudges — but it does motivate me in terms of the athletic side of me, how I am on the court. For sure, it’s always something I come back to to just inspire me.”

On Wednesday, Auger-Aliassime will face the seventh-seeded Matteo Berrettini, a close friend with whom he recently watched Italy’s win over Belgium in the European soccer championships.

While he mentioned Novak Djokovic and Roger Federer, who both advanced to the quarterfinals with straight-set wins, as clear favorites, Auger-Aliassime acknowledged that the withdrawals of the top-five players Rafael Nadal and Dominic Thiem “can open up a draw a little bit for some players.”

“As players on the tour, you try to take every chance you can get,” he said. “Of course, you don’t always do it, but you fight for it. It’s good to see some new faces in the quarterfinals. At least I’m happy to be part of it.”

Shapovalov will go into his first Wimbledon quarterfinal as a favorite against the 25th-seeded Russian Karen Khachanov, who prevailed in Monday’s wildest match.

After four sets of fairly standard tennis between two big hitters, Khachanov’s fifth set against Sebastian Korda devolved into a battle of frayed nerves, with the two combining to break serve 13 times in the fifth set of Khachanov’s 3-6, 6-4, 6-3, 5-7, 10-8 win. According to IBM, the 13 breaks in one set were a Wimbledon men’s singles record.

“At least we made some record,” Khachanov said with a sheepish smile. “It’s not common, but it is what it is with the nerves.”