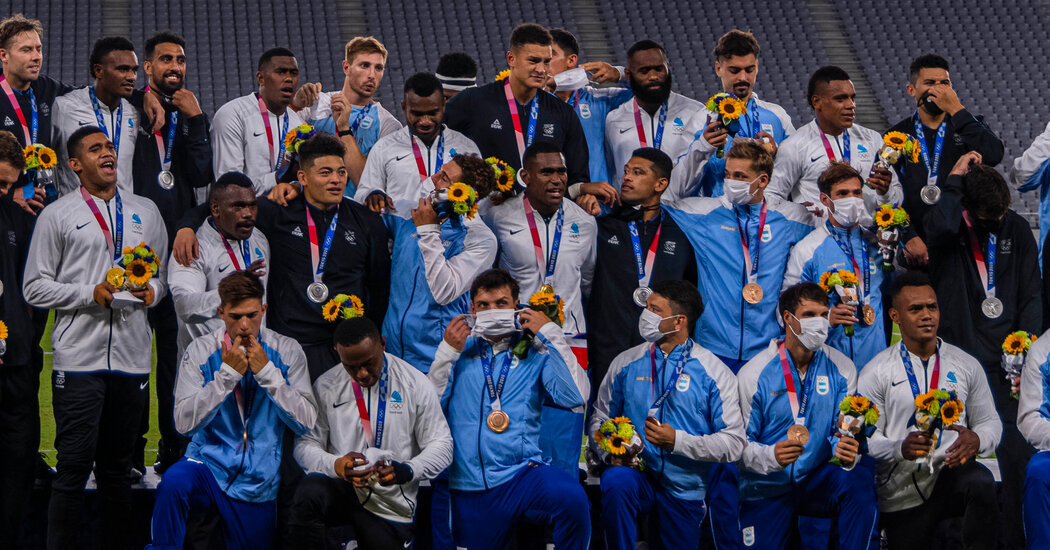 TOKYO — Every four years, the Olympics are filled with feats of athletic excellence and moments of unbridled celebration. That has been the case in Tokyo, too.

Much to the growing frustration of organizers.

With the Games taking place against a backdrop of rising coronavirus cases — Tokyo recorded a record number of new infections on Tuesday — and organizers eager to respect the concerns of an anxious Japanese public, strict social distancing measures were put in place for the two weeks of competition. No detail has been spared.

But when it comes to the medals stand, those rules have often gone out of the window.

Across the board at these Olympics, the sense of elation and the sheer joy and emotion of becoming an medalist have raised fears that some of the Games’ most happy moments have the potential to turn into microspreader events.

This week alone a maskless American taekwondo fighter gave her Russian opponent a hug after they collected their medals, a beaming Austrian cyclist and a burly British swimmer joined arms with beaten rivals and, on Wednesday, Fiji’s winning rugby sevens team belted out a song from the top step and then took a smiling (and largely mask-free) group photo with the teams from New Zealand and Argentina.

And each time, Olympic organizers and public health officials cringed.

“This isn’t a nice to have,” an International Olympic Committee spokesman, Mark Adams, said of the virus safety measures in place for the Games. “This is an absolute priority.”

But after the first weekend saw a parade athletes ignoring the mask rules after receiving their medals, the I.O.C. revised its protocols to try to find a middle ground between personal joy and public health.

Acknowledging that for athletes the traditional medals stand photo was “a unique moment in their sporting career,” the I.O.C. said it would allow “a physically distanced image on the podium without their masks on for 30 seconds, and a group photo with masks on the gold-medal step.” Monitors would watch the clock, Olympic officials said.

Within hours, though, even those looser rules were being forgotten.

On Sunday night at the Makuhari Messe, the venue for taekwondo, Anastasija Zolotic became the first American woman to win a gold medal in the sport.

After her unexpected feat — even her own team had not considered Zolotic a contender for gold — the 18-year-old from Florida let out one last ear-piercing shriek and then, wearing a mask, clambered onto a podium to receive her prize. Almost as soon as she had it, though, Zolotic peeled off her mask and took her medal to her mouth, pretending to take a bite out of it.

Zolotic’s mask would not go on again. Not during the United States anthem. Not during her celebratory walk around the arena for photographs. Not even when she and her vanquished Russian opponent, Tatiana Minina, engaged in a short discussion and — shrugging their shoulders as if to say, what the heck — threw themselves into a friendly mask-free embrace.

As the evening progressed, the scene was repeated time after time, just as it was on Monday, when countless athletes at sites throughout Tokyo ignored the podium rules and an exasperated Adams issued a renewed appeal calling on them to do their part to ensure the safe environment organizers had promised their Japanese hosts.

“We need to give everyone confidence,” Adams said. “Not just our Japanese partners and hosts but all the other stakeholders here. We are making a really special effort today again to remind all of our groups and all of our people that they need to wear their masks.”

Yet even as he was speaking, the rules were being broken. At the swimming pool, members of the winning United States 400-meter freestyle relay team vacillated between masks on and off during their podium ceremony and its aftermath. The silver- and bronze-medal-winning teams from Italy and Australia did the same.

It remains unclear what organizers can do to ensure compliance. Adams demurred when asked if the I.O.C. planned to issue penalties to repeat offenders, saying only that there would be talks with teams and individuals who violated the rules. Athletes had previously been threatened with temporary exclusion or even disqualification if they disobeyed the coronavirus regulations.

“This is a very important issue for us,” Adams said.

And even as organizers cast a wary eye on the medals stand, not all of the moments have been problematic. The new do-it-yourself nature of the medals ceremony — athletes are presented their medals on a small tray, and asked to place them around their own necks — have led to some poignant moments. For some teammates and doubles pairs who have trained together for years, the chance to present medals to one another — a recognition of their hard work and success — has produced tears of joy. Most athletes, though, were just happy to have them, given the circumstances.

“It’s a tough time, isn’t it?” Britain’s Lauren Williams said after picking up her silver medal in taekwondo. “You have to adapt. I was on the podium and I enjoyed it, so it doesn’t matter how I got the medal.”