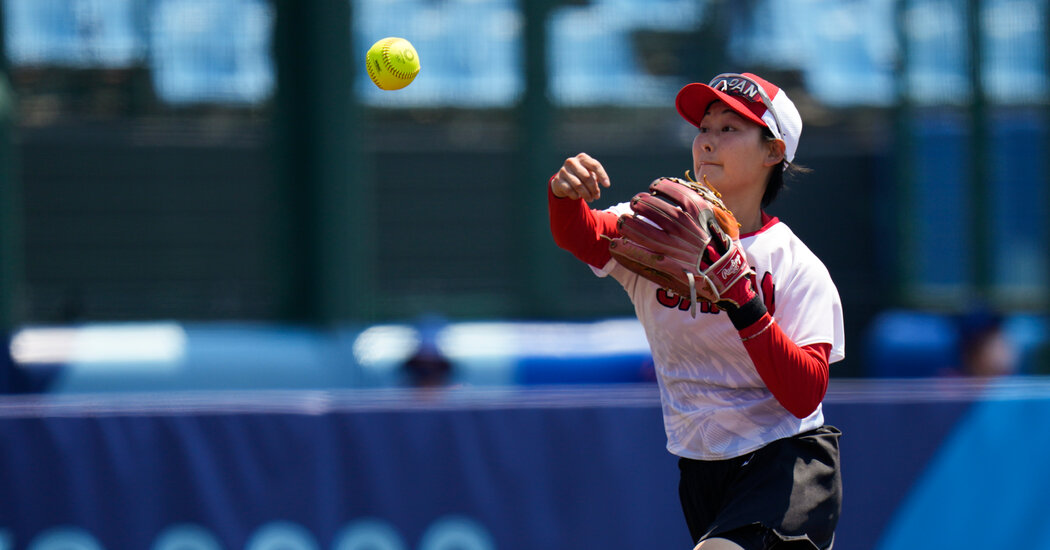 When the first pitch was thrown in a game between Australia and Japan on Wednesday morning, softball fans around the world celebrated the return of their sport to the Olympic stage after a 13-year absence.

“We ARE back … SOFTBALL is back in the Olympics!” Natasha Watley, a two-time U.S. Olympic softball player and a gold medalist in 2004, tweeted before the game. “I’ll be glued to the tv for the next week!”

The game, which Japan won 8-1, was the first contest ahead of the opening ceremony and one of several softball games and soccer matches scheduled before the official start. It began at 8 p.m. Eastern time on Tuesday, with a game between the U.S. and Italy scheduled to follow at 11 p.m. and one between Mexico and Canada set for 2 a.m. Eastern on Wednesday.

The games will be broadcast on NBC Sports. (The games will take place on Wednesday but will appear on U.S. television starting on Tuesday night because of the 13-hour time difference.)

Among those who watching were the former U.S. pitcher and Olympic gold and silver medalist Jennie Finch and her 8-year-old daughter Paisley. It was the first time her daughter, who also plays softball, would see her sport represented on the world’s biggest stage.

“I’m so excited for our sport and our game and the platform it has to be back in the Olympics,” Finch said before the game, adding that she was “excited for the athletes especially.”

Softball first became an Olympic sport in 1996, and it appeared in each summer Games through those in 2008 in Beijing, after which it was dropped.

“For it to be taken away, it was like, how can we go back 60 years?” Finch recalled thinking at the time. “We’ve worked so hard to get our sport to where it is.”

But beginning with the Tokyo Games, each Olympic host can propose adding sports with national appeal. Softball, along with baseball, both of which are popular in Japan, were approved for competition in Tokyo.

The U.S. team, which captured three consecutive Olympic gold medals in 1996, 2000 and 2004 and a silver medal at the 2008 Games after falling to Japan, will make its fifth Olympic appearance in Tokyo. Cat Osterman, who was on the last two U.S. teams, is on this year’s roster at age 38.

Still, there was some dissatisfaction across social media that the game was being played on a baseball field rather than a softball field, which would be smaller with an infield entirely composed of dirt, rather than a mix of dirt and grass.

In both the 2004 Athens Games and the 2008 Beijing Games, the host cities built softball fields as part of their Olympics infrastructure.

“I don’t care what the field looks like, we’re happy it’s back & we’ve been waiting a very long time,” Danielle O’Toole Trejo, who plays for Mexico’s national team and is also a player in Athletes Unlimited, wrote on Twitter. “Our play WILL NOT change. We’re GOOD enough to adapt.”

The sport’s Olympic return, however, is bittersweet. There is no guarantee that softball will be featured in another Games.

“Our sport needs this,” Finch said. “It’s crucial for our sport globally to be in the Olympic Games and have our presence and have the platform to showcase how great of a game it is.”