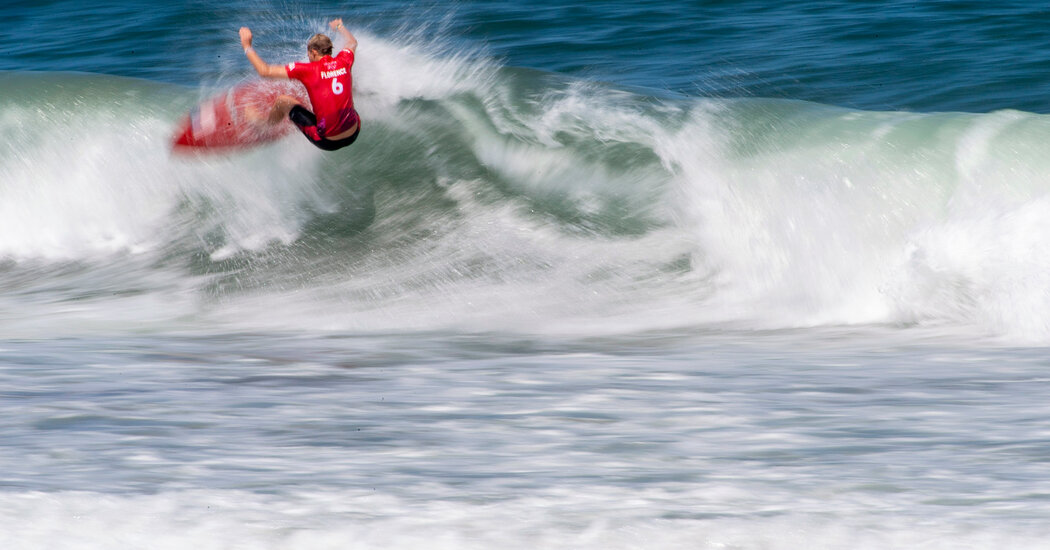 ICHINOMIYA, Japan — Like most surfers, Stephanie Gilmore of Australia never expected to see surfing in the Olympics.

She is no stranger to global stages, of course. Like many of the competitors here for the sport’s debut in the Olympics, she has traveled the globe for years, chasing waves and world championships. She has won seven of them. But even at age 33 she is not, she said, so jaded that she is immune to wonder.

In the last week alone, she said, she has met the world’s No. 1-ranked tennis player, spent time with Norwegian volleyball players and marched in the kind of opening ceremony that she had, until this year, only seen on television.

“I’m obviously trying to be as serious as I can be,” Gilmore said Sunday, the first day of surfing competition at the Games. “But it’s such an enjoyable experience in one’s life to come to the Olympics.”

Surfing is spending the Games far removed from much of the other Olympic action, 60 miles away from Tokyo at Tsurigasaki Beach, an area known as Shida by locals.

The surrounding surf town is lined with restaurants with names like Hula Cafe. It is not unusual to see locals cruising on the oceanfront road with a shortboard under one arm.

But at these Olympics, it’s nearly impossible for anyone outside the Olympic bubble to get a glimpse of the action. The Olympic encampment dwarfs the surrounding area, and the surf break is positioned between two jetties, a natural barrier that helps to keep local surfers from riding the Olympic waters and one that ensures even the most curious fans are kept at a safe distance.

On Sunday morning, the first of the eight-day period blocked out for the Olympic competition, the waves were deemed surfable — not necessarily good, but good enough for organizers to start the event on time, with the first round beginning about 7 a.m.

In the hours that followed, the only people dotting the beach were team members and venue staff. When the Australian team — Gilmore, Sally Fitzgibbons, Julian Wilson and Owen Wright — came in from a heat, they were serenaded with cheers of “Aussie! Aussie! Aussie!” When the American surfers Caroline Marks, Carissa Moore, John John Florence and Kolohe Andino landed a wave, the U.S. contingent supporting them stood and rang cowbells.

“I couldn’t ask for better energy within our team,” said Moore, a four-time world champion. “It still feels like any other contest. I have a jersey on, there are Jet Skis in the water, you have the priority board and the time is counting down.”

Marks surfed a particularly strong heat, easily winning her round with a score of 13.40. Florence followed her into the water, but finished his first heat in third place, failing to automatically advance to the third round. He needed to get the nerves out, he said, and he soon did — picking up enough speed to land a few air reverses and win the heat with a score of 12.77.

Gabriel Medina of Brazil won the last heat of the first round of the men’s competition but dismissed the mediocre waves as “tiny and hard.”

“It’s not the conditions you want to surf to start off in the Olympics, but it is what it is,” he said. He said he expected he would be able to put on a better show on Monday, when the waves, driven by a tropical storm, were expected to be better.

Most of the surfers said the key to success this week would be simple: Rather than moan about how they wished the waves were bigger, they had to approach the Tsurigasaki surf with a new strategy.

“I spent the whole month in California before this, and California has waves just like this,” Gilmore said.