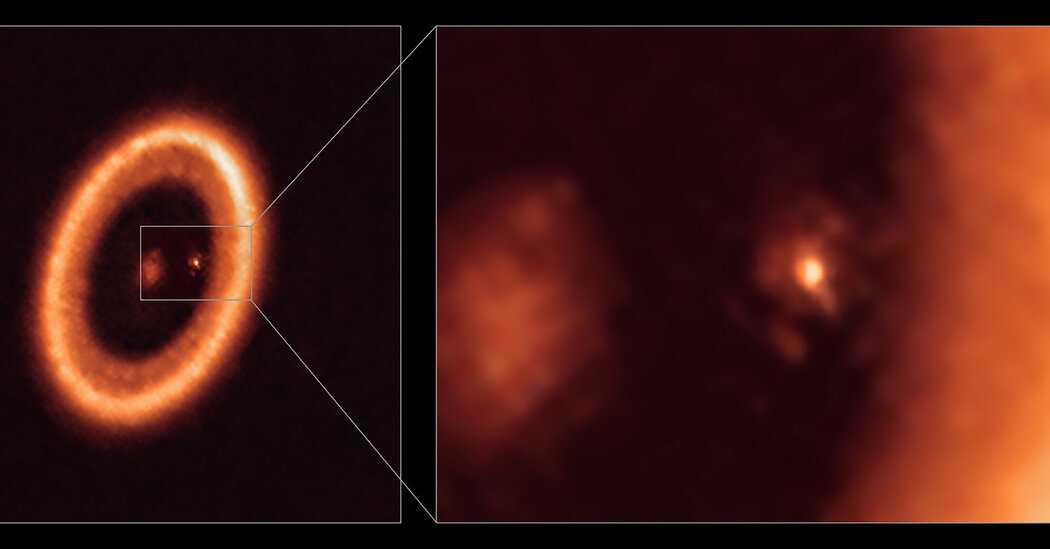 Our solar system is home to a magnificent menagerie of moons, from icy ones filled with turbulent oceans to volcanic ones decorated with pits of raging hellfire. To date, astronomers have discovered 4,438 worlds orbiting other stars, and there is no doubt that diverse moons dance around most of these exoplanets. But stargazers have yet to conclusively find any — these exomoons have proven too small and too far-flung to be spotted.

Now, after years of observations of a pair of Jupiter-like exoplanets nearly 400 light-years from Earth, astronomers have found the next best thing: a disk of debris orbiting one of these worlds, a ring of rock and gas gradually coalescing under its own gravity. In other words, astronomers have caught a circumplanetary foundry in the act of making moons.

This is the first time such a feature has been unambiguously detected. And unlike many extrasolar discoveries, this object was not found through indirect methods — the subtle wobbling of a star revealing the presence of an orbiting planet, for example. This disk was effectively photographed. This is a real image of a baby planet surrounded by its very own moon-making forge.

Astronomers are unreservedly thrilled, and a little lost for words. “I don’t have coherent scientific thoughts. I just look at the image and say ‘wow’, every time I see it,” said Bruce Macintosh, an astronomer at Stanford University not involved with the study.

The Great Eruption of a Massive Star – Stunning New…

This discovery — reported Thursday in The Astrophysical Journal Letters — will help scientists address one of the most perplexing questions in astronomy: How do planets and their moons form? Possible answers invoke myriad world-making methods, from titanic impacts to the gluing together of spaceborne hail, where the conglomerating force of gravity may battle disruptions from magnetic whirlpools that nascent worlds are thought to encounter.

“We have all these theories that are beautiful, but if you cannot test them, they could be completely wrong,” said Myriam Benisty, an astronomer at the University of Grenoble and the study’s lead author. This extraordinary system she and her colleagues identified is a perfect place to review these ideas.

The solar system, 4.6 billion years old, is somewhat middle-aged. This distant star system, in contrast, is in its childhood. Its star, PDS 70, came to life a mere six million years ago. The star-encircling disk of gas and dust that made its two Jupiter-like planets, PDS 70b and PDS 70c, is still present. As new planets are slowly pieced together, the two youths that already exist continue to siphon off this disk’s debris and fortify themselves with it.

The signal, though, was faint. Dr. Benisty and her colleagues used ALMA to conduct follow-up observations, demonstrating with little doubt that PDS 70c has its own disk of debris, one substantial enough to make three moons the size of Earth’s satellite.

It won’t be long before such discoveries become routine. In the coming months and years, increasingly powerful telescopes and space observatories will become operational. Soon, the first exomoons themselves will be captured on camera. One day, perhaps, we will capture an exo-Earth on camera — a second pale blue dot. “That is our dream,” said Kate Follette, an astronomer at Amherst College not involved with the study.

Astronomers are impatient to see it all. But their appetite for discovery has been temporarily satiated by the remarkable sight of alien moons preparing to make their debut. “It’s rare, especially in our field, that you see something this beautiful,” Dr. Follette said.