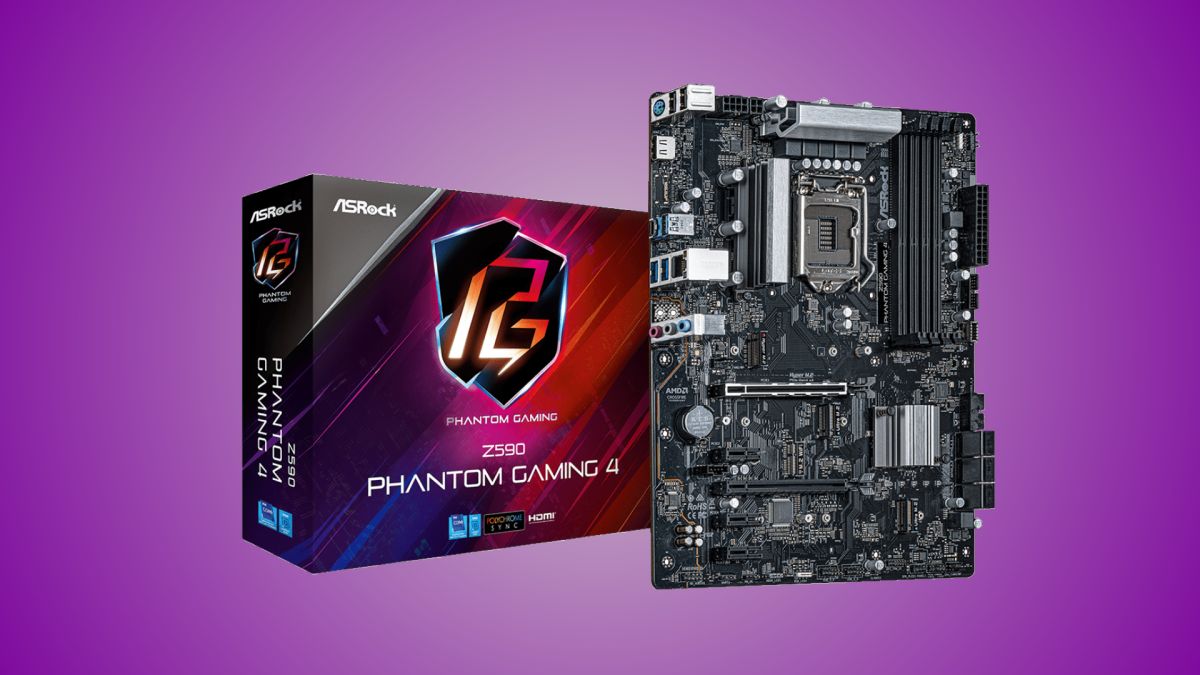 With a slew of Z590 motherboards already out under its belt, ASRock starts off the series with the  ASRock Z590 Phantom Gaming 4, its most budget-friendly motherboard supporting the latest 11th Gen Intel processors.

For those looking for a basic, no-frills motherboard, the Z590 Phantom Gaming 4 might be the affordable choice you’ve been looking for. It’s best for those who aren’t going to tinker around with overclocking, and supports some decent memory speeds as well. There’s also a very healthy number of options for storage, and a good number of fan headers for both CPU and case fans.

But there are some definite cutbacks that have been done with this board in order to keep it at a low price range. The ports on the rear IO panel are oddly spaced out, and we can’t help lament the lack of USB Type-A ports as well, even though there’s ample headers on the motherboard itself. There’s also no protection over the IO components, and very small heatsinks over other parts of the motherboard that aren’t very effective at keeping temperatures low over long periods of time.

You get what you pay for with this board, and while it won’t appeal to enthusiasts or PC modders, the Z590 Phantom Gaming 4 is just fine for anyone looking to build a basic gaming rig with the latest Intel processors.

From a design perspective, the Z590 Phantom Gaming 4 is simplicity at its best. There’s no flashy logos or fancy RGB lighting, and the board looks very minimalist in any PC case. The mostly black PCB can make it a bit challenging to spot connectors however, so we recommend familiarizing yourself with the locations of various key components before you start plugging things in.

Inside the box you’ll get an instruction manual, some screws for securing in M.2 drives, IO shield, SATA cables, and an installation DVD with drivers.

The first thing you’ll notice on this motherboard are how small the heatsinks are. There are two located on the VRM, but these are smooth rather than finned, so we’re not too confident about heat dissipation under heavy workloads. As mentioned before, there’s no protection over the IO components, which again is another sacrifice to make at this price point.

To the right are four DIMM slots, capable of supporting a maximum of 128GB DDR4 RAM – up to 3200MHz natively when an 11th Gen Intel CPU is used. Overclocking is available via the BIOS, and there are XMP 2.0 profiles that can be loaded automatically as well to squeeze out as much performance as you can. There’s probably no scenario where you’d want this much RAM on this board, so we would have liked to have seen just two RAM slots instead and more attention being paid to the cooling and IO options.

Right next to the DIMM slots you’ll find the first of two RGB headers, one 5V/3A addressable and one RGB 12V/3A, utilizing ASRock’s Polychrome SYNC software. There’s two more RGB headers at the bottom of the board as well, which should be enough to tweak any RGB lighting you want in your case or components.

What we do love about this board is the ample amount of fan headers placed in various points around the board. In total there are six – two for the CPU (either fan or water cooling), and four are for the case. That allows for plenty of airflow in your case, and we happily utilized all connections to keep air moving freely.

Towards the middle of the board you’ll find three M.2 sockets, with the one closest to the CPU operating at PCIe 4.0 speeds. The other two will run at PCIe 3.0 speeds, with the third slot being able to accommodate drives up to 110mm in length. That’s a good number of slots to use for storage, so if you wanted to you could completely eliminate having to use any of the onboard SATA controllers for traditional HDDs or SSD. But should you choose to use those as well, you’ve got a number of SATA ports to plug your drives into too. There’s also a USB 3.1 header on the board for you to connect front ports to, making it easy to use compatible drives and other hardware. The board doesn’t include WiFi or Bluetooth, but there is a M.2 Socket E for a WiFi module to be plugged in.

There are two PCI Express x16 Slots which can either run as single at Gen4x16  or dual at Gen4x16 (PCIE1) / Gen3x4 (PCIE3). Three PCI Express 3.0 x1 slots are also available for other devices, though if you’re using lager GPUs on this board, you might have a bit of a squeeze trying to get some things plugged into adjacent PCIe slots. The board does support AMD Quad CrossFireX and CrossFireX, but there’s no mention of SLI support here.

The rear IO panel is very oddly spaced out, and what’s easy to notice is there’s only five USB ports available here. While the board itself does have more USB headers for front connectivity, it’s very easy to eat up rear USB ports when devices start getting connected, so you’ll need to use them sparingly. There’s one USB 3.2 Type C port at the rear for compatible devices which is good to see, as we’re now seeing more motherboard manufacturers including this as a minimum on their boards.

You’ll also find an Intel Gigabit LAN port and HDMI, as well as 7.1 HD Audio ports (powered by the Realtek ALC897 Audio Codec) that supports Nahimic Audio. There’s also – oddly enough – a PS/2 port, though in this day and age why this is being included on boards is a real puzzle.

The Z590 Phantom Gaming 4 features a fairly straightforward BIOS, with each section allowing you to tweak memory settings, fan speeds, and control RGB options. The advanced view lets you drill down into overclocking both RAM and CPU, but as we later found out, that isn’t always a good idea. The board also includes ASRock’s Base Frequency Boost feature, which allows non-K series CPUs to enjoy a base frequency boost and run at faster speeds over a longer term.

ASRock included a few utilities to manage your motherboard from within Windows, including one for tuning and overclocking, Nahimic 3 audio software, RGB control, as well as one for keeping your motherboard firmware and drivers up to date.

These programs didn’t run into any issues when we used them, and the BIOS is also easy to navigate around for both new and advanced users.

Here’s how the ASRock Z590 Phantom Gaming 4 did in our suite of benchmarks:

Overall performance in our synthetic benchmarks was promising, and gaming overall was fairly decent. Despite using an older GPU, we were still able to get a consistent 60fps in Overwatch and Valorant on medium settings, though this did drop down to 45-50fps in Shadow of the Tomb Raider on similar settings.

Where things do take an absolute nosedive is with CPU throttling on this board. We fired up Intel’s Extreme Tuning Utility to do a 30 minute stress test, but within fifteen seconds of the test kicking off, the CPU was throttled. Performance went from 4.21GHz (at 1.138V) to 3.67GHz (at 0.989V) and remained there until the end of the test. So for any application that’s utilizing a lot of CPU time for even a brief period, you’re going to face a fair share of throttling in order to keep temperatures and voltages in check. Temperatures peaked at about 60C for the CPU under load, and about 45C for the motherboard – these dropped to 32C and 29C respectively when idle.

ASRock continues its Base Frequency Boost feature we’ve seen on previous boards, which allows non K-series Intel CPUs to run at higher base frequencies for a longer period of time. You can adjust this setting in the BIOS, but we found that upping the voltage gave us at best an extra 5fps in some of our games, but made some of our benchmarks perform slightly poorer.

The ASRock Z590 Phantom Gaming 4 is positioned as an entry-level gaming board, and to that effect is certainly fulfils that need. It’s a board to choose if you’re really not interested in any of ASRock’s high-tier offerings and just want the bare minimum for your build that won’t feature an overclocked CPU. There’s a good amount of storage and cooling options available with this motherboard, though we have to once again bring up the limited number of USB ports at the rear.

Where things will start to cause problems is with CPU performance. This board can’t maintain high clock speeds for very long, and under short amounts of CPU load will immediately start to throttle performance. This might not be very noticeable in games that use the GPU for most of the heavy lifting, but for any application that relies more on the CPU, you’ll find that performance will take a hit in order to keep both power draw and temperatures under control.