Ashley Barty Eliminated in Round 1 of Olympic Tennis Tournament 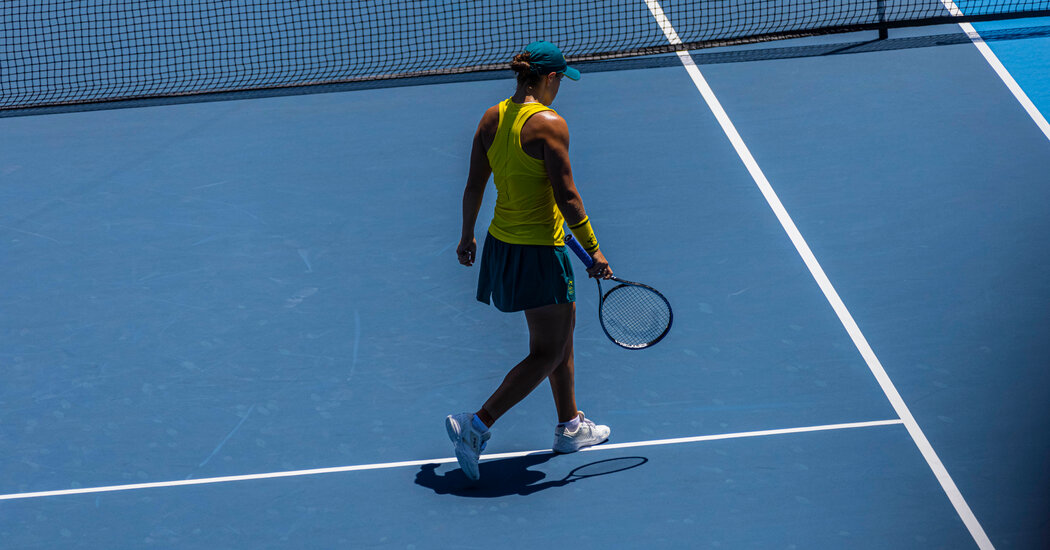 Naomi Osaka of Japan won her first match as a rare athlete to light an Olympic cauldron, but Ashleigh Barty of Australia is out of the Olympic singles tennis tournament.

Just two weeks after winning her first title at Wimbledon, the No. 1-ranked Barty fell in straight sets to Sara Sorribes Tormo of Spain, 6-4, 6-3.

Under a broiling sun that combined with high humidity and temperatures above 90 degrees Fahrenheit, Barty never found her rhythm against the 24-year-old Spaniard. Barty saved two set points in the first set, and two match points while serving at 3-5 in the second set. But on Sorribes Tormo’s third chance, Barty netted a backhand volley, one final error in a 94-minute match that was filled with them.

Barty is No. 1 in the world and the favorite in any tournament she enters, but women’s tennis is a wide-open competition these days. She has often spoken about how there is so much depth on the women’s tour that every player can be pushed from the first match in any tournament.

That is exactly what happened Sunday at the Olympics, which can sometimes seem like the most random of all tennis competitions. Four years ago, Monica Puig of Puerto Rico, who has never made the quarterfinals of a Grand Slam, took the gold medal in the women’s tournament.

Barty struggled from the outset Sunday despite showing flashes of her world class form. The 10th game of the first set was the match in a nutshell. Facing two set points and trying to draw even in the opening set, Barty pasted the sideline with a high crosscourt backhand, then blasted another backhand on the next point onto the back edge of the baseline. For a moment, it looked like Barty was going to grind through the shaky start. But then she made two costly errors and Sorribes Tormo had the lead.

It was more of the same in the second set as Barty kept spraying balls wide and long and into the net, even on her patented slice backhand. She had a chance to take control of the set and break Sorribes Tormo’s serve in the sixth game, but she failed to convert her two break points. She would not win a game the rest of the way.

Barty was not the only player of note to meet with an unfortunate end Sunday. Andy Murray of Britain, the former world No. 1 and the two-time gold medalist, pulled out of the singles competition with a nagging strain of his right quadriceps.

Murray will continue to compete for Britain in the men’s doubles tournament with Joe Salisbury. The pair won their first round match Saturday.

“I am really disappointed at having to withdraw but the medical staff have advised me against playing in both events,” Murray said. “So I have made the difficult decision to withdraw from the singles and focus on playing doubles with Joe.”

After Barty was finished, Osaka, another favorite in this tournament and fresh off her star turn lighting the Olympic cauldron, took center court and did not disappoint. Playing in a mostly empty stadium that had a smattering of about 100 members of the Japanese news media and other credentialed officials, Osaka dispatched Saisai Zheng of China 6-1, 6-4.

Osaka was dominant throughout the 97-minute match. She sprinted to a 5-0 lead, punishing Zheng with her serve and forehand. She won 69 points to just 47 for Zheng, fired six aces and never double faulted.

It was an impressive comeback match for Osaka, who has not played since her first round win at the French Open. She then dropped out of that tournament, citing mental health issues, and skipped Wimbledon.

Osaka said she had kept the cauldron-lighting a secret since March, when officials asked her if she would do it. “I was happy and honored,” she said. “I’m very happy to be here and to be playing, especially in Tokyo.”

Barty will now head to North America for the summer hardcourt swing of the pro tour that concludes with the U.S. Open. Because of Australia’s strict rules related to travel during the coronavirus pandemic, she has been on the road since March and will not return home until the fall.