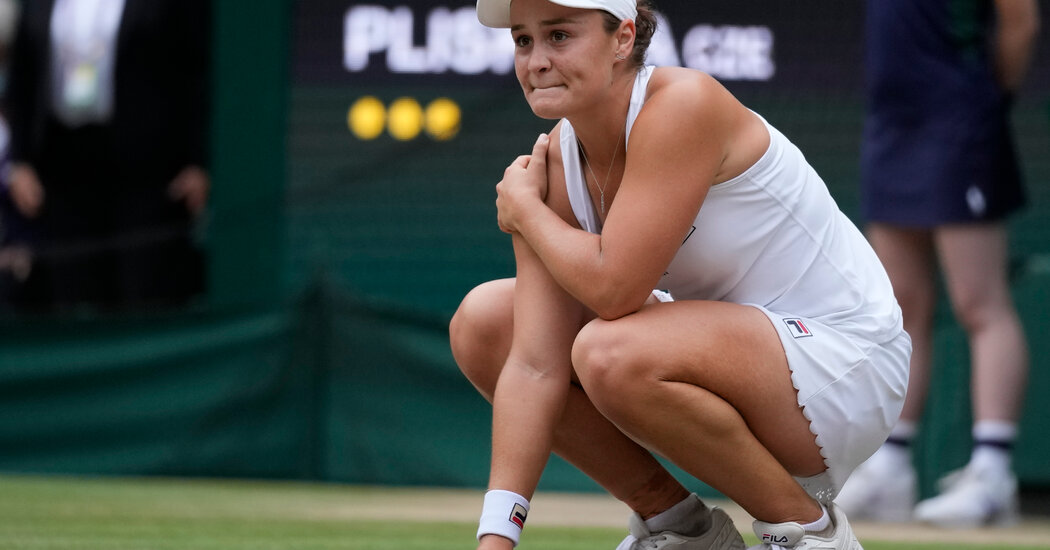 Barty is the No. 1 player in the world and was the top seed but she was not considered a runaway favorite at the beginning of Wimbledon, a tournament she has never won. Just last month, Barty had to retire in the middle of her second-round match at the French Open with an injury to her left hip.

“This is incredible,” an overwhelmed Barty said as she clutched the trophy.

She did not play a warm-up event on grass ahead of Wimbledon but reeled off six straight wins at the All England Club without dropping a set on her way to the final. Barty is the first Australian woman to win the Wimbledon singles title since Evonne Goolagong Cawley won it in 1980.

Barty idolizes Goolagong Cawley and paid tribute to her throughout this year’s tournament by wearing a version of her scallop-hemmed dress.

Barty chose not to play in 2020 when tennis resumed in August, instead remaining in Australia and taking several months away from the sport. She returned in January for a tuneup event ahead of the Australian Open but lost in the quarterfinal of her country’s championship.

Since then, she has had a standout year, even with her injury in France, and especially considering that because of Australia’s strict quarantine requirements, she has not been home since March. Barty will not head home until at least after the U.S. Open in September.

In beating Pliskova, Barty knocked off a two-time Grand Slam finalist whose own success at Wimbledon was perhaps even more surprising than Barty’s. Pliskova, who was seeded eighth, had lost three of her last four matches ahead of Wimbledon and suffered a humiliating 6-0, 6-0 loss to Iga Swiatek of Poland at the Italian Open in May.

After an up-and-down start to Barty’s career, the version that appeared on Centre Court Saturday was for long stretches the Barty that so many have expected. At 25, she was playing in just her second Grand Slam final. She has won both, but as the No. 1 player in the world, and blessed with her level of talent and athleticism, it was hard to watch Barty on Saturday and know that mix had yielded just one other Grand Slam title — the French Open in 2019.

Barty was dominant at the start, winning the first 14 points of the match and the first four games, as Pliskova struggled to get loose and manage the nerves of playing in the final of the sport’s most important tournament.

Pliskova came to life after that, and made the first set score respectable, but its outcome was never in doubt.

When Barty is on, she has a Federer-like ability to appear as though she is floating across the court. She curls forehands at impossible angles, slices and whips backhands, depending on what the moment requires, seemingly pushing her opponents another step back behind the baseline with each shot. Don’t give Barty an overhead. No matter where it is, she finds a way to glide under it and smash it away.

Barty got an early service break in the second set to take a 2-1 lead, but Pliskova battled back in the sixth game of the set, unleashing a forehand down the line to give herself three chances to knot the score at three. That shot seemed to give Pliskova a jolt of energy and confidence. In the next game, she began pounding her serves and forehands and sending Barty into the corners for the first time all afternoon.

This was a battle of two first-time Wimbledon finalists who warred with their nerves as much as each other.

Serving at 5-5 and 40-0, Pliskova seemingly had the game won, but Barty scrambled and stretched for a forehand to make Pliskova hit one more shot. With the court wide open, Pliskova netted the backhand volley. Sensing an opening, Barty dug in and forced Pliskova into a series of errors from the baseline to win the next four points and grab a chance to serve for the match.

But Pliskova battled once more, breaking Barty’s faltering serve once more to force a tiebreaker. Handed a new lease on life, Pliskova did not waste it, chasing down balls in the back and front of the court as Barty’s first serve all but disappeared. Barty would double-fault on set point. The match headed to a deciding third set.

“I enjoyed every minute of being on this court,” Pliskova said after the match.

It did not start well for Pliskova, who played an awful service game at 0-1, netting a wide-open forehand volley to give Barty another early service break. After that, Barty started to roll once more, curling her forehands again and landing her serves into the corners of the box.

Pliskova hung in, stretching the points and the games as long as she could, forcing Barty to keep going for winners, but as resilient as she was she could not mount that one last comeback. Serving for the match a second time, Barty flirted with disaster, giving Pliskova a chance to break her serve once more, but on match point she lulled Pliskova into one more error. As Pliskova’s backhand hit the net, Barty clutched her head in disbelief having achieved her childhood dream.

“Really proud of myself about being able to reset,” Barty said.

Barty said it took her a long time to verbalize how badly she wanted to win at Wimbledon and slept little on Friday night, but when she came onto the court on Saturday she felt as though she was at home.

Her performance was an exclamation point on a stunning two weeks.

Craig Tyzzer, Barty’s coach, said she played little tennis in the weeks following that match, focusing mostly on rehabilitation and building her strength. She did not begin to practice her serve until the Wednesday before the tournament.

“It’s been a different preparation,” Tyzzer said. “I feel like it’s built really well. It started a bit scratchy. Felt she played well in the first match. Didn’t play so great in the second match. Played better in the third. It sort of got better each time.”

The championship will surely help make this year’s challenges to Barty feel worth it. She desperately missed the game and the competition last year. Standing just 5-foot-5, on the smaller side for top players these days, Barty has been a sports nut since she was a small child, playing cricket and Australian Rules football with her siblings and mates in Australia. She once took time off from tennis to play professional tennis.

She is an avid golfer who often has a set of clubs handy to squeeze in rounds as she travels the world for tennis. And she has done more traveling this year than ever.

“She really put her head down and said, ‘OK, if this is what we have to do,’” Tyzzer said. “It’s a long time away from family and friends. But we’ve got a good support network around us. We’re making the best of what we can. Would be nice to be able to pop home and have a week or two off and then come back, but we can’t do that. We’re trying to make the most of what we’ve got.”

And that is exactly what Barty did Saturday.