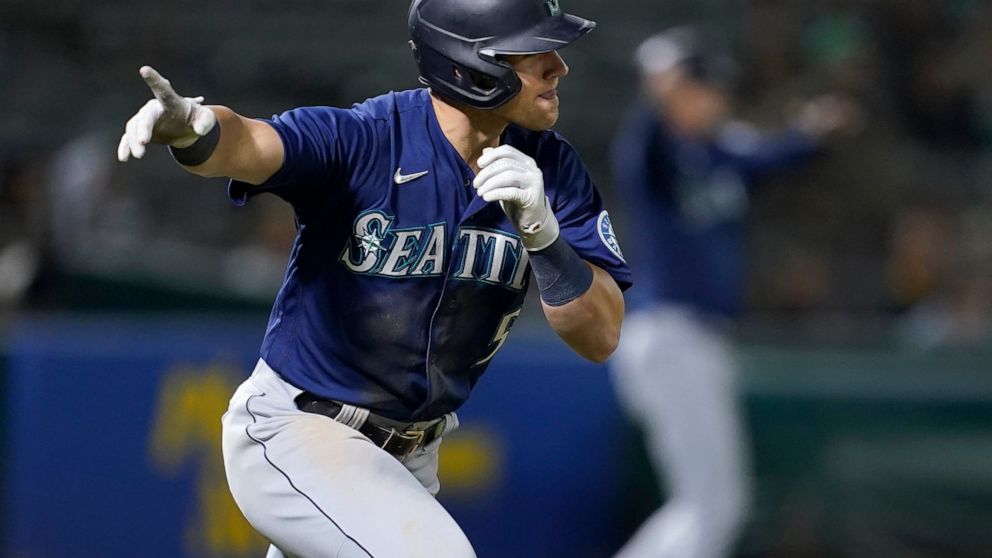 OAKLAND, Calif. — The Seattle Mariners realize how much these sort of wins in late August can mean as they try to stay in the AL playoff race with the September stretch run approaching.

Jake Bauers hit a tiebreaking, two-run single with two outs in the ninth inning off struggling closer Lou Trivino, and the Mariners rallied past the Oakland Athletics 5-3 on Monday night.

Ty France launched a tying homer off Trivino (5-6) to start the ninth, handing the reliever his second straight blown save after converting 14 in a row. The A’s lost a third consecutive game by giving away a late lead.

France also tied Sunday’s game in Houston with a solo home run in the ninth inning and put the Mariners on top with an RBI single in the 11th as they went on to a 6-3 victory.

Matt Olson’s 32nd home run in the sixth put Oakland ahead after Mitch Haniger’s tying, two-run shot in the top of the inning.

Anthony Misiewicz (4-4) induced an inning-ending double play in the eighth and Paul Sewald finished for his seventh save.

“It’s been crazy the number of late-inning comebacks we’ve had throughout the year,” Servais said. “A heck of a comeback against a really good team over there.”

Yan Gomes homered and drove in a run on a groundout for a 2-0 A’s lead, but Paul Blackburn couldn’t hold it trying for his first win in more than three years. France’s drive extended a strange streak in which the last 12 runs allowed by the A’s were scored on homers dating to Friday — then Bauers lined a single to left.

Gomes’ groundout followed a double steal in the first, then he hit his third homer in the fourth. This one certainly hurt for the A’s on the heels of consecutive one-run losses to the Giants in the Bay Bridge Series in which San Francisco twice won on late pinch-hit home runs.

Blackburn, the right-hander called up after Chris Bassitt’s frightening facial injury last week on a line drive, is winless since June 29, 2018, against Cleveland. He is 0-5 over his last eight major league appearances and five starts since July 6 that year.

“He’s just coming out there and pumping strikes. That’s all we can ask for,” Gomes said.

A’s third baseman Matt Chapman was a late scratch with a bruised left foot after he fouled a ball off it Sunday. X-rays were negative, and Josh Harrison replaced him.

Seattle outfielder Jarred Kelenic ended an 0-for-16 skid with a single in the second.

“I’ve said that often, there are guys that steal bases and there’s guys that steal bases when they’re expected to steal a base, which means they’re throwing over more, which means they’re slide-stepping more, at second base you see all the inside moves,” manager Bob Melvin said. “It hasn’t seemed to really affect him too much right now. Kind of similar to Rickey, he’s at top speed really quickly.”

After coming into the game leading the majors with 39 stolen bases, Marte came up hobbling after a sixth-inning single in which he was then thrown out at second. He felt some tightness in his quadriceps muscle, Melvin said.

“Marte is as exciting a player that there is to watch in baseball. He singularly has changed the dynamics of this A’s team offensively!” Stewart posted on Twitter.

Mariners: CF Kyle Lewis is shagging flyballs and ramping up his baseball activities as he works back from a torn right meniscus that has sidelined him since June 1. He could begin a rehab assignment this weekend, Servais said.

Athletics: C Sean Murphy wasn’t scheduled to start based on matchups but was inserted as designated hitter with the lineup switch just more than an hour before first pitch. Murphy said his tender wrist has improved. He felt it during his first at-bat Saturday. “It’s much better today,” Melvin said. … Bassitt, struck by a line drive in the face last Tuesday night at Chicago, had a normal CT scan Monday and was cleared by plastic surgeon Dr. Peter Revenaugh in Chicago to proceed with surgery as planned Tuesday to repair a cheekbone that was fractured in three places. His right eye had been swollen shut but is now open. He will likely remain in Chicago for two to three days after the procedure.

RHP Chris Flexen (10-5, 3.65 ERA) pitches for the Mariners in the afternoon finale of the quick two-game series between AL West foes. Seattle is 16-7 in his outings.