As China Boomed, It Didn’t Take Climate Change Into Account. Now It Must. 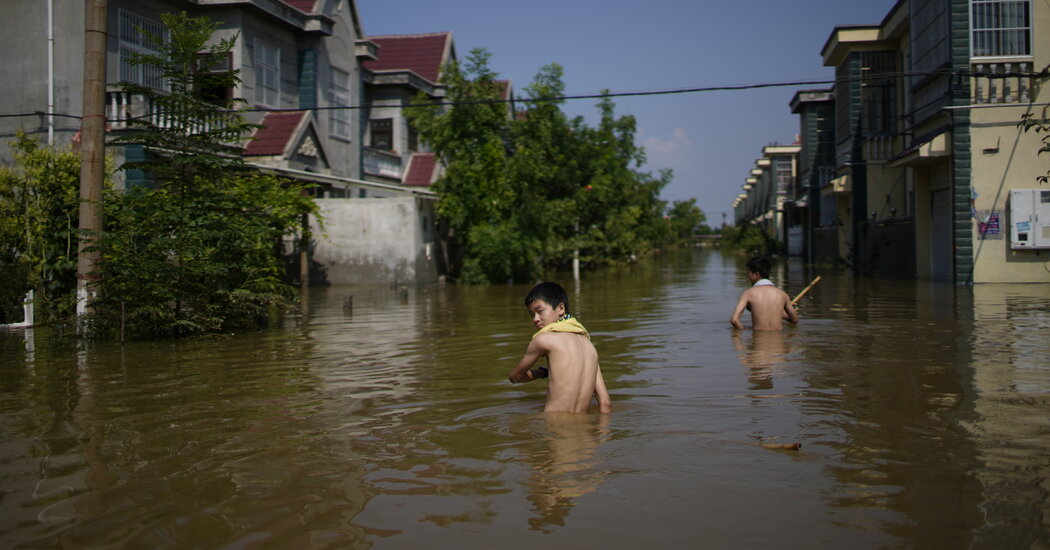 China’s breakneck growth over the last four decades erected soaring cities where there had been hamlets and farmland. The cities lured factories, and the factories lured workers. The boom lifted hundreds of millions of people out of the poverty and rural hardship they once faced.

Now those cities face the daunting new challenge of adapting to extreme weather caused by climate change, a possibility that few gave much thought to when the country began its extraordinary economic transformation. China’s pell-mell, brisk urbanization has in some ways made the challenge harder to face.

No one weather event can be directly linked to climate change, but the storm that flooded Zhengzhou and other cities in central China last week, killing at least 69 as of Monday, reflects a global trend that has seen deadly flooding recently in Germany and Belgium, and extreme heat and wildfires in Siberia. The flooding in China also highlights the environmental vulnerabilities that accompanied the country’s economic boom and could yet undermine it.

China has always had floods, but as Kong Feng, then a public policy professor at Tsinghua University in Beijing, wrote in 2019, the flooding of cities across China in recent years is “a general manifestation of urban problems” in the country.

The vast expansion of roads, subways and railways in cities that swelled almost overnight meant there were fewer places where rain could safely be absorbed — disrupting what scientists call the natural hydrological cycle.

Faith Chan, a professor of geology with the University of Nottingham in Ningbo in eastern China, said the country’s cities — and there are 93 with populations of more than a million — modernized at a time when Chinese leaders made climate resiliency less of a priority than economic growth.

“If they had a chance to build a city again, or to plan one, I think they would agree to make it more balanced,” said Mr. Chan, who is also a visiting fellow at the [email protected] Research Institute of the University of Leeds.

China has already taken some steps to begin to address climate change. Xi Jinping is the country’s first leader to make the issue a national priority.

As early as 2013, Mr. Xi promised to build an “ecological civilization” in China. “We must maintain harmony between man and nature and pursue sustainable development,” he said in a speech in Geneva in 2013.

The country has nearly quintupled the acreage of green space in its cities over the past two decades. It introduced a pilot program to create “sponge cities,” including Zhengzhou, that better absorb rainfall. Last year, Mr. Xi pledged to speed up reductions in emissions and reach carbon neutrality by 2060. It was a tectonic shift in policy and may prove to be one in practice, as well.

The question is whether it is too late. Even if countries like China and the United States rapidly cut greenhouse gases, the warming from those already emitted is likely to have long-lasting consequences.

Rising sea levels now threaten China’s coastal metropolises, while increasingly severe storms will batter inland cities that, like Zhengzhou, are sinking under the weight of development that was hastily planned, with buildings and infrastructure that were sometimes shoddily constructed.

Even Beijing, which was hit by a deadly flash flood in 2012 that left 79 dead, still does not have the drainage system needed to siphon away rainfall from a major storm, despite the capital’s glittering architectural landmarks signifying China’s rising status.

In Zhengzhou, officials described the torrential rains that fell last week as a once-in-a-millennium storm that no amount of planning could have prevented.

Even so, people have asked why the city’s new subway system flooded, trapping passengers as water steadily rose, and why a “smart tunnel” under the city’s third ring road flooded so rapidly that people in cars had little time to escape.

The worsening impact of climate change could pose a challenge to the ruling Communist Party, given that political power in China has long been associated with the ability to master natural disasters. A public groundswell several years ago about toxic air pollution in Beijing and other cities ultimately forced the government to act.

“As we have more and more events like what has happened over the last few days, I do think there will be more national realization of the impact of climate change and more reflection on what we should do about it,” said Li Shuo, a climate analyst with Greenpeace in China.

China’s urbanization has in some ways made the adjustment easier. It has relocated millions of people from countryside villages that had far fewer defenses against recurring floods. That is why the toll of recent floods has been in the hundreds and thousands, not in the millions, as some of the worst disasters in the country’s history were.

The experience of Zhengzhou, though, underscores the extent of the challenges that lie ahead — and the limits of easy solutions.

Once a mere crossroads south of a bend in the Yellow River, the city has expanded exponentially since China’s economic reforms began more than 40 years ago.

Today, skyscrapers and apartment towers stretch into the distance. The city’s population has doubled since 2001, reaching 12.6 million.

Zhengzhou floods so frequently that residents mordantly joke about it. “No need to envy those cities where you can view the sea,” read one online comment that spread during a flood in 2011, according to a report in a local newspaper. “Today we welcome you to view the sea in Zhengzhou.”

Xi’s Warning: A century after the Communist Party’s founding, China’s leader says foreign powers would “crack their heads and spill blood” if they tried to stop its rise.Behind the Takeover of Hong Kong: One year ago, the city’s freedoms were curtailed with breathtaking speed. But the clampdown was years in the making, and many signals were missed.One Year Later in Hong Kong: Neighbors are urged to report on one another. Children are taught to look for traitors. The Communist Party is remaking the city.Mapping Out China’s Post-Covid Path: Xi Jinping, China’s leader, is seeking to balance confidence and caution as his country strides ahead while other places continue to grapple with the pandemic.A Challenge to U.S. Global Leadership: As President Biden predicts a struggle between democracies and their opponents, Beijing is eager to champion the other side.‘Red Tourism’ Flourishes: New and improved attractions dedicated to the Communist Party’s history, or a sanitized version of it, are drawing crowds ahead of the party’s centennial.

In 2016, the city was one of 16 chosen for a pilot program to expand green space to mitigate flooding — the “sponge city” concept.

The idea, not unlike what planners in the United States call “low-impact development,” is to channel water away from dense urban spaces into parks and lakes, where it can be absorbed or even recycled.

Yu Kongjian, the dean of the School of Landscape Architecture at Peking University, is credited with popularizing the idea in China. He said in a telephone interview that in its rapid development since the 1980s, China had turned to designs from the West that were ill-suited for the extremes that the country’s climate was already experiencing. Cities were covered in cement, “colonized,” as he put it, by “gray infrastructure.”

China, in his view, needs to “revive ancient wisdom and upgrade it,” setting aside natural spaces for water and greenery the way ancient farmers once did.

Under the program, Zhengzhou has built more than 3,000 miles of new drainage, eliminated 125 flood-prone areas and created hundreds of acres of new green spaces, according to an article in Zhengzhou Daily, a state-owned newspaper.

One such space is Diehu Park, or Butterfly Lake Park, where weeping willows and camphor trees surround an artificial lake. It opened only last October. It, too, was inundated last week.

“Sponges absorb water slowly, not fast,” Dai Chuanying, a maintenance worker at the park, said on Friday. “If there’s too much water, the sponge cannot absorb all of it.”

Even before this past week’s flooding, some had questioned the concept. After the city saw flooding in 2019, the China Youth Daily, a party-run newspaper, lamented that the heavy spending on the projects had not resulted in significant improvements.

Others noted that sponge cities were not a panacea. They were never intended for torrential rain like that in Zhengzhou on July 20, when eight inches of rain fell in one hour.

“Although the sponge city initiative is an excellent sustainable development approach for stormwater management, it is still debatable whether it can be regarded as the complete solution to flood risk management in a changing climate,” said Konstantinos Papadikis, dean of the School of Design at Xi’an Jiaotong-Liverpool University in Xi’an.

The factories that have driven China’s growth also pumped out more and more of the gases that contribute to climate change, while also badly polluting the air. Like countries everywhere, China now faces the tasks of reducing emissions and preparing for the effects of global warming that increasingly seem unavoidable.

Mr. Chan, the professor, said that in China the issue of climate change has not been as politically polarizing as in, for example, the United States. That could make it easier to build public support for the changes local and national governments have to make, many of which will be costly.