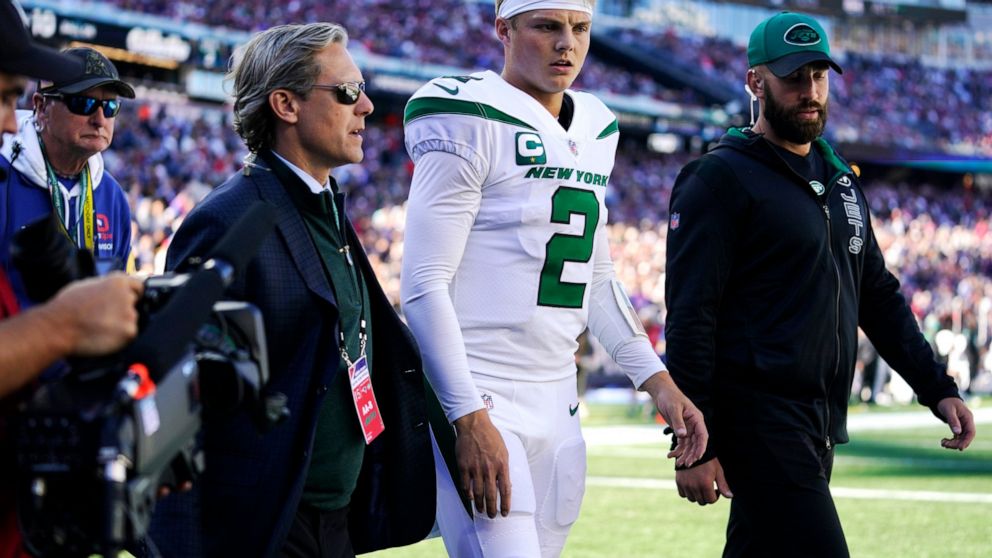 NEW YORK — New York Jets rookie quarterback Zach Wilson has a sprained posterior cruciate ligament in his right knee and will be sidelined at least two weeks, an MRI confirmed Monday, according to a person with direct knowledge of the diagnosis.

Wilson was injured in the second quarter of New York’s 54-13 loss to New England on Sunday when he was hit by Patriots linebacker Matt Judon, who fell on the back of the quarterback’s legs after he threw an incomplete pass.

Wilson and the team said after the game the initial diagnosis was a sprained PCL and that was confirmed by the MRI on Monday morning, the person told The Associated Press on condition of anonymity because the team hadn’t announced the results.

ESPN first reported the MRI results on the injury, which will keep Wilson sidelined for at least the Jets’ game next Sunday at home against Cincinnati and their Thursday night game at Indianapolis on Nov. 4. New York is then home against Buffalo on Nov. 14 and Miami on Nov. 21.

Wilson said he heard a “pop” in his right knee when he was hurt, and he said after the game “it just kind of feels like something is off as far as just being loose or a little bit unstable a little bit.” There was some initial concern the injury might have been more serious, but initial exams indicated it was likely a PCL injury and not a potentially season-ending situation.

Mike White made his NFL debut while replacing Wilson after the injury, going 20 of 32 for 202 yards and a touchdown with two interceptions. He is likely to fill in while Wilson is sidelined, with veteran Josh Johnson also on the practice squad.

White is in his fourth NFL season, but hadn’t thrown a pass in a regular-season game. He was drafted by Dallas in the fifth round in 2018 out of Western Kentucky. White was waived by the Cowboys during final cuts the following summer, and the Jets signed him to their practice squad.

New York opted to not sign a veteran in the offseason to back up Wilson, instead having White and James Morgan compete for the job. The 35-year-old Johnson was signed during training camp, but he hasn’t played in an NFL game since 2018 with Washington.

White won the backup job and Morgan was since signed to Carolina’s practice squad. And now it appears White’s in line to start at least the next couple of games for the Jets while Wilson recovers.

“I’m confident in myself,” White said Sunday. “I’m mostly confident in the guys we have in that locker room, the leaders we have. The coaching staff, too. Have to make the corrections necessary and keep going and being professionals and working our tails off and trying to get this thing going.”

The Jets are 1-5 under Robert Saleh and their offense is struggling mightily. New York has yet to score a point in the first quarter of any game this season, the first team to be held scoreless in the opening period over its first six games since the 2008 Detroit Lions, who went 0-16.

Wilson had an up-and-down first six games, throwing for just four touchdowns while tying Kansas City’s Patrick Mahomes for the NFL lead with nine interceptions. He has completed just 58% of his passes, ranking second worst among quarterbacks with at least five starts with only Chicago’s Justin Fields — a fellow rookie — worse at 57.3%.

Wilson, the No. 2 overall pick, now will have to watch from the sideline as he heals.