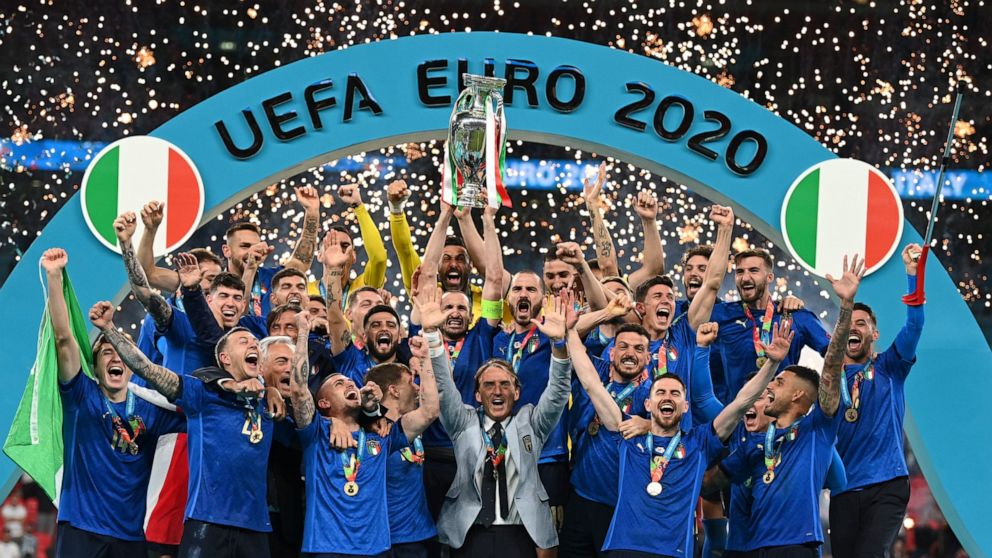 LONDON — Italy’s national soccer team started things off on June 11 in Rome, and then finished things off exactly one month later in London.

The Italians won their second European Championship on Sunday at Wembley Stadium by beating England in a penalty shootout in the final, and The Associated Press photographers were there the whole way.

The Euro 2020 tournament, which was delayed one year by the coronavirus pandemic, opened on June 11 in Rome with Italy beating Turkey. Fifty matches followed, with Cristiano Ronaldo, Kylian Mbappe and Raheem Sterling among the players in focus as the 24 participating teams played in 11 cities around the continent.

There was also one of the scariest moments in the tournament’s history when Denmark midfielder Christian Eriksen collapsed on the field in Copenhagen during the team’s opening match against Finland on June 12. Eriksen suffered cardiac arrest late in the first half and his teammates formed a protective shield around him as medical workers resuscitated him with a defibrillator.

Ronaldo made more history in only four matches. He became the leading scorer in tournament history in Portugal’s opening match against Hungary, and also became the first player to score in five editions of the continental event.

Although Portugal was eliminated in the round of 16, Ronaldo finished the tournament as the top scorer with five goals and one assist. Czech Republic forward Patrik Schick also had five goals, including one from near the halfway line that left Scotland goalkeeper tangled up in his net.

Mbappe, who became only the second teenager to score in the World Cup final three years ago, failed to find the net at Euro 2020. And even worse for the Paris Saint-Germain forward, who is still regarded as one of the best players in the world, Mbappe also missed the decisive penalty in France’s shootout loss to Switzerland in the round of 16.

Sterling scored for England in the 1-0 victories over both Croatia and the Czech Republic, enough to put the team in first place in Group D and ensure they would play at Wembley in the round of 16. England’s only match away from its iconic national soccer stadium was in the quarterfinals, when it had to travel to Rome to face — and beat — Ukraine.

All along the way in this most unusual of tournaments, from Glasgow to Sevilla, from Munich to Amsterdam, from Budapest to Bucharest, and from St. Petersburg to Baku, the AP photographers were there.