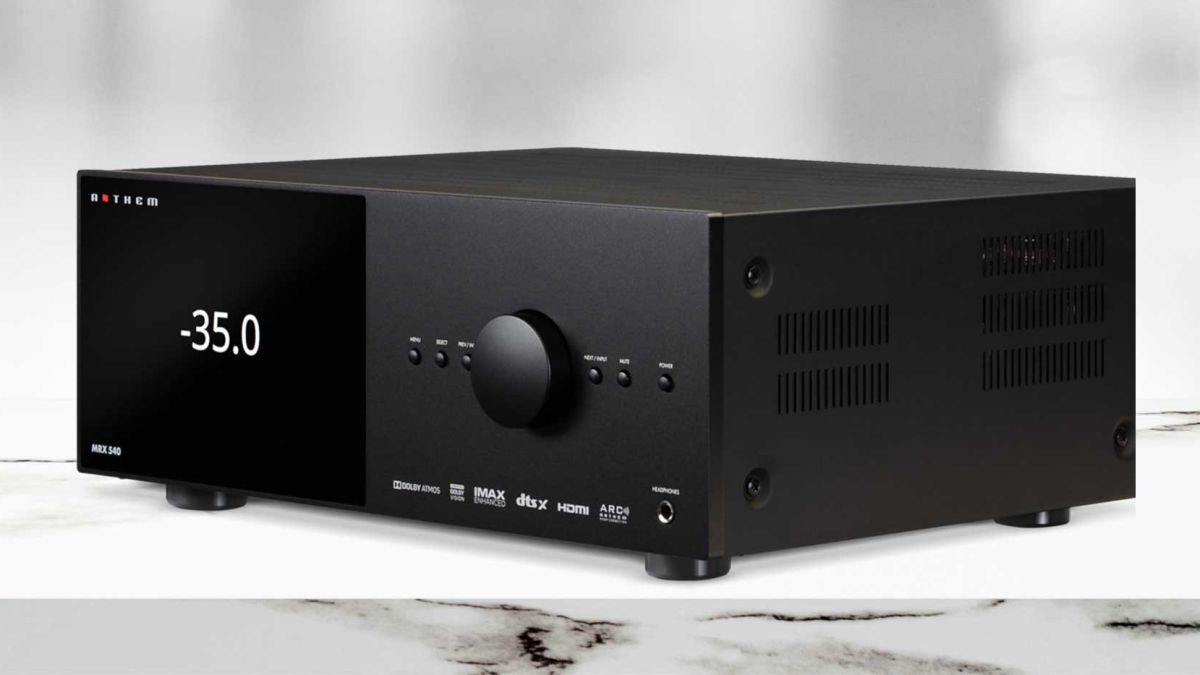 While many modern AV receivers try to cram in endless features, often at the inevitable expense of fundamental sound quality, the MRX 540 from Canada’s Anthem focuses on sound first, and makes a sensible choice of useful extras for users seeking a mid-price surround system.

It has five channels of solid Class-AB power to drive a 5.1-channel surround system, along with seven pre-out sockets so that you could expand the system to handle two height channels, though additional amplifiers would then be required.

We were especially impressed by the ability to use any web browser to define and name your own inputs, mixing and matching the video and audio sockets and more to suit your system needs precisely. There’s also a high-quality microphone and stand in the box, allowing the MRX 540 to adjust its output to suit your room and speakers.

Anthem’s MRX 540 is one of three AV receivers in the company’s latest range, with the higher models rising to 11 channels of power and 15 channels of processing at triple the price here.

With the MRX 540, the numbers are just five channels of power and seven of processing – that’s everything you need for a standard surround system of 5.1 channels, with the opportunity to use additional amplifiers to expand to 7.1 or 5.1.2 with two Atmos height channels.

This receiver continues the design refresh introduced by Anthem on its recent STR amplifier series, and it’s a great look, ditching the more common layout of twin knobs for volume and input selection, in favour of giving over the full left half of the 43cm-wide fascia to a large and friendly graphic display. One large volume knob sits to the right, flanked by small press buttons which allow basic operation and menu selection.

But it’s far more likely you’ll control the MRX 540 either using its full-size remote control, or by ‘second-screening’ with a tablet or phone logged on to the receiver’s network IP address, which opens up a clear and easy-to-use browser interface.

This proves key to the Anthem’s overall ease of use, as it allows far more versatile set-up of inputs and surround parameters than offered by most rivals, even those with on-screen displays, over which the Anthem has the not insignificant advantage of not interrupting what you’re watching.

Spin the MRX 540 around, with some care given its weight of 12.8kg, and the usual AV receiver array of inputs and outputs are revealed. There are seven HDMI inputs and two outputs here, one output equipped with HDMI eARC and so able to play stereo and surround from a connected TV back down the HDMI to the receiver.

There are no legacy analogue video inputs at all, but plenty of additional audio inputs, with five line-level analogue, three optical digital and two coaxial digital. The only obvious omissions are the lack of USB-B for connecting a computer, or a phono-level input to attach a turntable.

The MRX 540 can also receive audio via Bluetooth and, once networked by Ethernet or Wi-Fi, also by AirPlay 2 or Chromecast, so point-to-point streaming is well covered. What the Anthem receivers lack, compared to rivals such as Denon, Marantz and Yamaha, is any built-in streaming and multiroom platform.

While Spotify Connect and Roon compatibility are on a promise for future firmware updates, other services such as internet radio, Tidal or Amazon Music will require an external device, either a standalone streamer connected to an input, or wireless streaming from a phone, tablet or computer.

The outputs of the MRX 540 run beyond the five sets of speaker binding posts to include a full set of RCA line-level pre-outs, for all five standard channels plus two extra (because of the seven-channel processing).

There’s a pair of stereo line outputs, two undifferentiated subwoofer outputs. and even an optical output, so you could use a preferred external DAC when listening in stereo. And there’s a full-size headphone output on the front panel.

While the MRX 540’s standard inputs operate just fine out of the box, that browser interface allows a rare degree of versatility in defining your own inputs exactly as you prefer.

You can create up to 30 of these ‘virtual inputs’, specifying the video socket, the audio socket, the speaker layout for that input, whether to invoke Anthem Room Correction (see below), lip-sync delay and volume trim, or to apply additional Dolby post-processing for Music, Movie or Night settings, or a ‘listening mode’ which can upscale mono or stereo signals to a wider set of speakers. This is powerful flexibility.

A second advantage here is that when you type in a name for a virtual input, this immediately appears on the front panel, making subsequent input selection so much easier than with receivers that make you remember that your Blu-ray player is on HDMI2, your PVR on HDMI 3, and so on.

With your speaker profile defined and distances to your speakers entered into the browser interface, you can unbox the additional package labelled Anthem Room Correction (ARC). As with all such systems this uses a microphone to measure test tones from the listening position – or here a minimum of five listening positions – then applies correction to compensate primarily for the acoustic response of your room.

But unlike some other systems, the latest ‘Genesis’ edition of ARC doesn’t remove all the warmth of room effect; its algorithms are based on research from Canada’s National Research Council, where room effect is considered an essential part of the psychology of listening.

Still more importantly, most room correction systems come with a worryingly cheap and curious puck-shaped microphone and at best a piece of folding cardboard to support it in the listening position.

Here Anthem supplies a proper pivoting mike stand, so you can make positioning highly accurate, and a light but high quality microphone in which you can place more trust than usual that a sensible result can be achieved.

Our experience with room correction systems is not good – we often find them either ineffective or downright destructive. ARC Genesis proved one of the few we’ve left in circuit after testing. It added fullness to music in particular, without messing with phase or detail. This can be considered a significant success.

The video performance of the MRX 540 is limited to passing through whatever it receives. The current run of MRX 540s, including our unit, has HDMI 2.0b silicon, good to 4K/60 with HDR including Dolby Vision.

Later runs will upgrade to 8K-compatible HDMI 2.1, with the current models then hardware upgradable (a AU$99 board replacement in Australia). HDMI 2.1 will be of advantage primarily to satisfy gamers seeking 4K/120 support for the latest consoles. Another production change will likely be to replace the DAC, which is from AKM, where supplies are currently restricted by a factory fire in Japan.

It is with audio performance that the MRX 540 best distinguishes itself. There is 100 watts per channel of continuous power available into eight ohms, or 130 watts into six ohms, and a promise of less than 1dB power drop when all channels are simultaneously driven, though that rarely happens in a real soundtrack.

We ran sizable speakers in a medium space with no sense of limitation; quite the opposite, indeed: the power from the Anthem is palpable.  The increased power of the higher models may assist in larger spaces or with difficult speakers; in our space more than this was simply not required.

It’s also solid Class-AB power, not the Class-D to which many manufacturers are turning for its advantages in efficiency and lower heat output. Call us old-school, but Class-AB still does the job best for our preferences of rich, real and powerful sound.

Listen to a favourite test scene on 4K Blu-ray, such as the Nile opening of X-Men: Apocalypse, and you are encouraged to leave the disc spinning to hear how the Anthem delivers spectacular steering of the cage-fight, and Scott’s toilet banging scene. Seen it before? Maybe – but a solid immersive soundfield like this delivers it all afresh, with true cinematic impact.

Stereo performance can be a weakness with AV receivers, so that most, as here, allow you to run the left and right channels out at line level to better amplification. But here, too, the Anthem impresses.

We set up virtual inputs to allow playback in either straight stereo or 2.1, with or without room correction, and despite our purist preferences we most enjoyed the subwoofer in circuit and the ARC engaged. It’s a tribute to the amplification quality of this receiver that music is handled with as much finesse as movie soundtracks.

The Anthem MRX 540 not only sounds excellent for its price in both 5.1 surround and stereo music modes, its browser-based control and set-up makes it unusually easy to set up and customise to your needs. It’s a magical movie machine, which doesn’t sacrifice musical qualities to achieve its superior soundtrack performance.

You want to find your inputs easily

The ability to easily rename and customise the Anthem’s inputs should not be underestimated. It makes this receiver easy for anyone to use compared with receivers where you have to remember what’s plugged into where.

You want to use Atmos height speakers.

While the MRX 540 allows you to add external amplification to enable two height speakers, you’ll be better off starting with a receiver offering seven or more channels of power.

The MRX 540 is on a promise to add Spotify Connect by firmware update, but other receivers come with fully functional streaming and multiroom platforms with far more in the way of online music available.