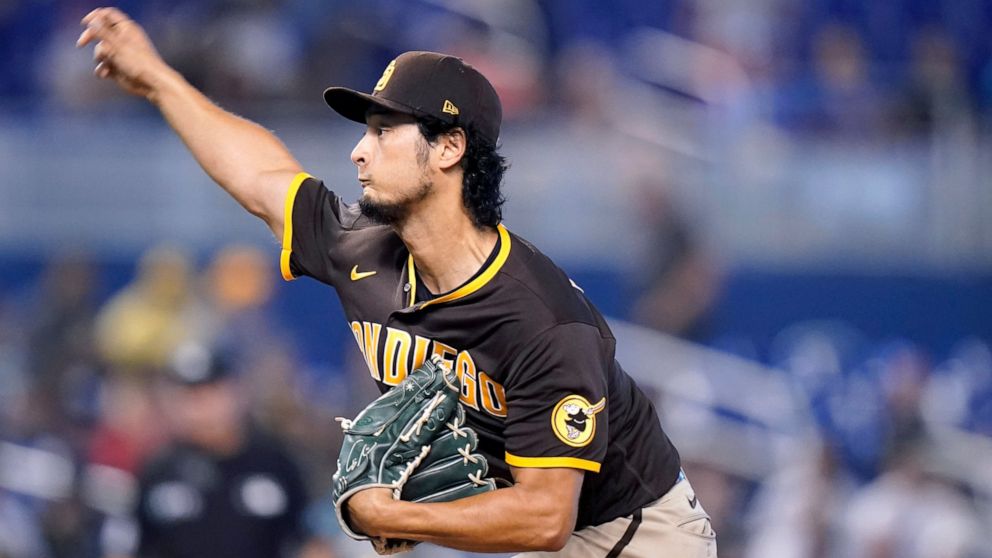 MIAMI — The Padres totaled five hits against seven pitchers. They had one runner thrown out at the plate, and another erased between second and third to short-circuit a rally. A leisurely throw to first by Manny Machado proved costly, and Yu Darvish endured another rough outing.

Not the way San Diego wanted to end a 10-game trip, especially not against a last-place team. But a 9-3 loss forced the Padres to settle for a split of their four-game series in Miami.

“We maybe left a play or two out on the field,” Padres manager Jayce Tingler said. “We just weren’t clean enough in a lot of areas today, and couldn’t cover up those mistakes.”

Darvish’s ERA rose for the fourth start in a row when he allowed four runs in five innings. The All-Star right-hander needed 23 pitches to get through the first, and later gave up homers to Deven Marrero and Brian Anderson.

“It’s always about adjustments,” the veteran from Japan said through a translator. “That’s what I’m going through right now. But I feel like I’m heading in the right direction.”

South Florida native Machado hit his 17th homer for the Padres, to the delight of his friends and family in the stands. But with the score tied in the fifth, Marrero beat Machado’s throw from third for an infield single to spark a rally.

“Marrero did a really good job of getting down the line,” Tingler said. “We’ve just got to be a little bit cleaner, a little bit tighter.”

Marrero then stole second and scored on Magneuris Sierra’s double, and Starling Marte followed with an RBI single for a 4-2 lead. Marte, who could be on the trading block, finished with three hits to hike his average to .303.

The Padres ran out of a threat in the sixth. They tried a double steal with Fernando Tatis Jr. at second and Machado at first, but Anthony Bass stepped off the rubber and threw to easily erase Tatis, and San Diego failed to score.

Eric Hosmer was thrown out trying to score from first on a one-out double in the second.

“We were probably a little too aggressive on the bases trying to make things happen,” Tingler said.

The Padres went 5-4 on their eventful trip, with a game in Washington interrupted because of a shooting outside the stadium, and another in Atlanta suspended until later because of rain.

Marrero had three hits, including his first home run since 2017, and Anderson hit his fourth homer of the year — and his first since missing two months due to a shoulder injury. Darvish said he was surprised both opposite-field blows cleared the right-field fence.

“We came to play,” Brinson said.

Anthony Bender (2-1) allowed one run in two innings on a bullpen day for Miami. With left-hander Trevor Rogers going on the injured list Saturday due to back spasms, manager Don Mattingly was forced to rely on relievers.

“They were solid,” he said. “They’re a tough club to match up with. But our guys did a nice job of not having that big inning.”

NL home run leader Tatís went 0 for 3 with two strikeouts and a walk. Brian O’Grady hit a pinch-hit homer in the ninth for San Diego.

Padres: Wil Myers was held out of the lineup because of a tight hamstring and grounded out as a pinch hitter.

A strange play involving first baseman Jesús Aguilar led to San Diego’s first run. Aguilar failed to come up with a throw from third for an error, and after retrieving the ball, he appeared to be distracted by a fan behind him and turned toward the stands, allowing batter Tommy Pham to continue to third.

Pham then scored on Hosmer’s single.

Padres: After a day off Monday, they’ll start a two-game series Tuesday at home against Oakland.

Marlins: They’ll have a day off and then begin a two-game series in Baltimore on Tuesday, with RHP Sandy Alcantara (5-9, 3.23) scheduled to start. Because of a stint on the bereavement list, Alcantara hasn’t pitched since July 16.