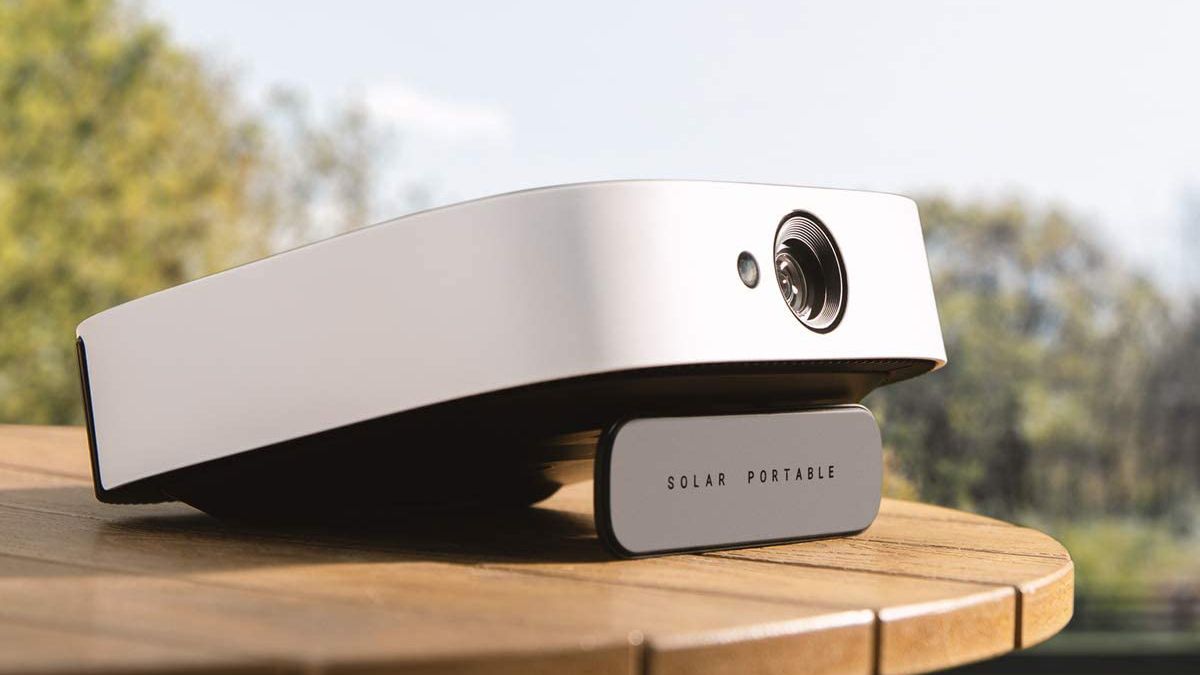 The Anker Nebula Solar Portable is a compact and stylish mini-projector that delivers in almost every area. Sporting a sleek design, it will look great on a shelf in your living room between uses, and it’s small enough to fit easily into a drawer, or even a backpack or tote bag for taking out and about.

A portable model, the battery will last around three hours, which should be good for getting in a film when you’re not close to a plug socket. However, its USB-C power port means you should also be able to link up a portable power bank for multiple uses.

The Bluetooth speaker functionality is a great addition to the Solar Portable’s feature set, effectively delivering two devices in one. We spent some perfectly happy hours playing music through the Solar Portable on our desk while writing up this review, and even if the sound is a bit soft compared to some dedicated home cinema projectors (particularly for lower frequencies), distortion is pretty minimal on all but the highest volumes. With a pair of 3W drivers, those volumes only get so high, but you’re largely able to hear what you need, at least.

While the picture quality is pretty adequate for the price and form factor, the projector is letdown on the brightness front. The listed 400 lumens brightness means the Nebula Solar Portable will struggle to remain visible in bright environments, while dark scenes are difficult to make out even in ideal viewing conditions.

The Anker Nebula Solar Portable can’t do everything, then. Nevertheless, it’s still a sleek, smart gadget with a few tricks up its sleeve. Just make sure you’ve closed the curtains, or waited until nightfall (if you’re out on a camping trip, that is), and maybe stick to watching Disney movies over gritty, grayscale crime dramas.

The Anker Nebula Solar Portable is available now for $599 / £599 (around AU$800) at Anker’s website, and on Amazon.com. It can be found at a handful of other retailers as well, such as eBay, and John Lewis in the UK.

The model isn’t currently listed on Anker’s website in Australia, although there is an out-of-stock Amazon listing in the region, which suggests we could see it land there eventually.

The Anker Nebula Solar Portable is a mini-projector, and that means it has to stay pretty compact for its designated use. Measuring just 19.2 x 19.22 x 5.45cm, it’s about the size of an A5 notebook, and light enough (2.38kg) to carry around in a backpack or place on a bookshelf when it isn’t in use.

The majority of the projector’s body is white, with gorgeous, reflective red detailing for the Nebula logo and the touch-sensitive volume buttons. There’s also a button that jumps between projection mode and Bluetooth speaker mode, which needs to be held down to make the change – a quick push won’t cut it. There’s a black grille along the back, for the vent (and speakers), under which you’ll find an HDMI port (2.0), a USB-C charging connector, and a USB 2.0 input.

Next to that USB port sits the power button, which – somewhat confusingly – glows green when the projector is turned off, presumably to showcase the fact that it has some battery life remaining. When turned on this light turns blue, which is likely to stop the light from being too visible in the dark viewing conditions usually favored for projectors.

The best part of the design, however, is the kickstand. It’s tucked in on the underside of the projector. Once opened up, it lifts the Solar Portable at a 13-degree angle to help position the image higher on a wall – ideal, if placed on a low coffee table or similar. If you want it angled any higher than that, you may need to find a taller table, or place it on a box.

The remote is functional, with the same boxy stylings as the Solar Portable, down to the shape of the rubber buttons. It takes two AAA batteries (included), and features a button for voice commands through Google Assistant. The voice control works perfectly fine, although note that you need to click the button once before speaking – rather than holding it down.

Battery life is officially listed at three hours, although in our tests it was closer to two and a half – with a warning that came about 10 minutes before shut-off. There is a battery indicator on the home screen, although it won’t be of much help if you’re mid-TV episode or film.

Either way, we found we could comfortably enjoy a feature-length movie on a single charge, along with a little bit of time browsing the Android TV interface for something to watch. Other remote inputs include volume, home, settings, back, refocus, and the directional pad.

The Solar Portable often autofocuses the image after the projector has been moved, although not always – and it’s worth keeping a close eye on the refocus button on the remote to ensure you’re not left waiting for a fuzzy image to fix itself.

Android TV is a solid interface that has only improved over the years, too, although there’s no native support for Netflix here (a common projector problem, sadly). Elsewhere, app support is broad.

In the right conditions, the picture quality of the Anker Nebula Solar Portable is a joy to behold. Watching Pixar’s movie Luca, this humble mini-projector’s color strengths were plain to see. The film’s wide-eyed sea monsters and the sleepy Italian town they visit – with its pastel-colored buildings – were aptly realised by the Solar Portable.

Detail is strong, even if it only caps out at Full HD resolution. There was little issue with a low-res binge session of Gilmore Girls on Netflix, although the level of grain did appear to vary between scenes, suggesting upscaling could be improved. For a mini-projector, though, the picture processing is really quite capable. And it should be, for the price. Of course, there are far cheaper portable models available (with a worse specification, admittedly), but we do think the Solar Portable’s price tag is justified for what it delivers.

The only real issue is brightness: 400 lumens really isn’t very much, and dark scenes can all but vanish from sight – in relatively dark conditions, too. The Solar Portable will fare fine for general watching, but this limitation needs to be kept in mind – even the half-light of a summer evening through the windows will have a significant impact.

It’s worth noting that the XGIMI Halo isn’t much more expensive, and offers 600 lumens via battery or 800 lumens when plugged in. That’s twice the brightness for an additional $100 / £100 or so, alongside the same Android TV interface. There’s also a more premium, all-black Nebula Vega Portable model that ups the brightness output to 500 lumens.

One of the Solar Portable’s best features is its ability to function as a Bluetooth speaker. If you head into the Android TV interface and then to Settings (top right of the home screen), you’ll find the option to connect to Bluetooth devices in the Remotes & Accessories section (not, confusingly, the Audio section). It’s easy enough to connect to a smartphone or laptop and then start enjoying the tunes.

The dual 3W speakers are capable enough for an at-home movie, indoors or outdoors, although they won’t be able to compete with too much environmental noise (a quiet camping spot should be fine, but a tent in the middle of a music festival might not see it fare as well).

Thankfully, the level of detail produced by these speakers is pretty good, meaning that sounds feel accurate even if they can’t go too loud. Dialogue in films comes across clearly, without much distortion. However, the finer details can be lost at higher frequencies, and lower frequencies are pretty non-existent.

When listening to Cage The Elephant’s Broken Boy, the impact of the drums and low, thudding bass basically disappears, even if the frequencies that remain are relatively well realised. However, Taylor Swift’s Folklore album is an ideal companion for the Solar Portable’s speaker ambitions, with peaceful piano progressions and acoustic tracks that don’t test the limits of the projector’s capabilities.

Should I buy the Anker Nebula Solar Portable?

You want a Full HD, portable projectorWith a 1080p resolution, this Full HD projector offers pretty capable levels of detail for its size, while its compact form factor makes it easy to carry out and about.

You want a projector that looks good, even when you’re not using itThis mini-projector is super-attractive. It will make a great addition to your home decor, whether tastefully displayed on a shelf or tucked into a media cabinet.

You plan to watch in the daytimeThe Solar Portable’s 400 lumens won’t deliver much in bright conditions; this projector struggles to display dark scenes effectively, even for an evening watch.

You want premium audioThis is a mini-projector, and the sound is acceptable within the Solar Portable’s price and portability constraints. However, with a total 6W output, there’s only so much this beamer can do for audiophiles.

You need a 4K projector4K resolution is harder to come by in portable models, of course, but if a Full HD model just won’t cut it, you might be keener on a proper living room projector instead.