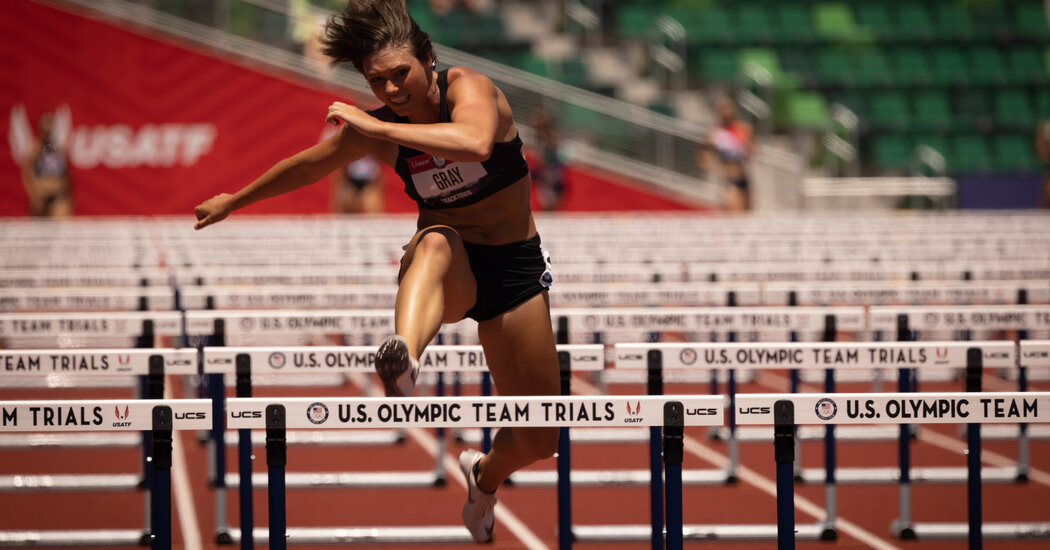 Jordan Gray wants to bring a women’s decathlon to the Olympics. Even if it happens long after she is able to compete in the event.

“The goal is 2024,” Gray, a 25-year-old Georgia native and the U.S. record-holder in the women’s decathlon, said recently by telephone. Her movement — Let Women Decathlon — is nearing 20,000 petition signatures in favor of adding the event to the Olympic Games in the name of gender equality in track and field, and it is gaining the support of Olympics icons who broke similar barriers decades ago.

For now, Gray and her peers are able to compete for Olympic berths only in the seven-event heptathlon, while the decathlon is restricted to men. She finished 11th in the heptathlon at the U.S. track and field trials last month, ending her hopes of competing in Tokyo this summer. Her fight for equality, however, has not ended.

“The women are lined up,” Gray said. Women’s decathlon is already approved by certain governing bodies in the sport, such as the International Association of Athletics Federations and U.S.A. Track & Field. The event has been contested by women around the world for decades, but in the United States, the first decathlon national title for women was awarded in 2019.

“If you start it, they will come,” Gray said. “I’m not doing this so I can go to the Olympics in the event that I love. In loving decathlon, I realize it’s an inequality that needs to be fixed.”

With roots in ancient Greece, the decathlon — a series of 10 track and field events — made its Olympic debut in 1912. Like most Olympic sports at the time, only men participated.

Contested over two days, the decathlon was made up of 100-meter, 400-meter and 1,500-meter runs, 110-meter hurdles, the long jump, high jump, pole vault, discus throw, shot-put and javelin throw. Shortly after its introduction, the competition became known as the determiner of the world’s greatest athlete.

Women’s track and field events first appeared in the Olympics in 1928, with three races and two throwing events, only to see the 800-meter race eliminated for several decades because numerous athletes had collapsed at the finish line, raising concerns that women were not physically equipped to run that far.

“The men collapsed just as much,” said Pat Winslow Connolly, a three-time Olympian who was the first American woman to compete in the 800-meter race when it returned to the Olympics in 1960. She was also among the first competitors in the women’s Olympic pentathlon (80-meter hurdles, shot-put, high jump, long jump and 200-meter run) when it was introduced in 1964.

Connolly realized early on that women’s opportunities in athletics were lacking.

“My last pentathlon was in 1970,” she said. “All along the way, I wanted to pole-vault. I wanted to do the decathlon. Pentathlon was like, what is this? Half as good? It never sat right with me, especially when they added the 800 and javelin to make it a heptathlon.”

The heptathlon (100-meter hurdles, high jump, long jump, shot-put, javelin throw, 200-meter and 800-meter runs) replaced the pentathlon in 1984. The new event quickly drew great notice in the United States, not because it was a step closer to the decathlon, but because of Jackie Joyner-Kersee, a U.C.L.A. star from East St. Louis, Ill.

After taking the silver medal in the 1984 heptathlon, she took gold in the event at the next two Summer Games. Her score of 7,291 points in the 1988 Olympics remains the women’s world record in the heptathlon.

Joyner-Kersee, who now runs a foundation aiming to provide athletic, academic and leadership opportunities for children in East St. Louis, believes that an Olympic decathlon is a logical step for women in track and field.

“At first I wasn’t a big fan, then I was like, why not be a supporter?” she said. “I want every young girl to have the opportunity to enjoy the multi events. I see so many talented young girls on the verge of something spectacular, but they give up the multi. I think the curiosity around it makes it worth a try. What can women do? Can they do 10 events? I don’t think there’s anything a woman can’t do. If you want to do it, you find the balance.”

It’s not easy to add three events to one’s repertoire.

“When they went from pentathlon to heptathlon, my biggest fear was learning to throw the javelin,” Joyner-Kersee said. “We didn’t have it in high school. When I picked it up for the first time, I hit myself in the head. I was like, ‘Oh my God, we have a long way to go.’”

For Kendell Williams, who will compete in Tokyo in the heptathlon, the pole vault is a deal breaker. She grew up running track and, along with her brother, Devon Williams, began adding field events under the coaching of their father.

“I cringe when my brother pole-vaults,” Williams said. “It looks really cool when it’s done well, but I’ve seen people stabbed with the pole, burn themselves. I’ve seen the pole snap. We spent all of these years nailing the events for heptathlon. It’s hard to expect someone to pick up discus and something as technical as pole vault.”

She understands the push for equality, even though she believes that if a women’s decathlon were added to the Olympics, “you’d see a dip in talent,” especially if it were to replace the heptathlon.

“It’s a whole other beast than the heptathlon,” Williams said. “If you look at the end of a decathlon, it looks like the guys have been massacred. I imagine you really feel the three extra events.”

Heptathletes feel drained when they finish the two days of competition with what is arguably their toughest event — the 800-meter run. The decathlon ends with the 1,500 meters. “Many times I walked to the line of the 800 and said, ‘Thank God I don’t have to run no 1,500,’” Joyner-Kersee said.

Heptathletes are considered primarily speed-oriented and decathletes more endurance-oriented, which is why athletes like Gray are unlikely to match their decathlon success and qualify for the Olympics in the heptathlon.

“Heptathlon is very geared and favorable to those who are quick,” said Gray’s coach, Andy Eggerth, who trains both heptathletes and decathletes. “A lot of world-class heptathletes are relatively bad at javelin and shot-put.”

“Heptathletes are sprinters and jumpers,” Gray added. “As a decathlete, where you’re not fast, you need that upper-body strength. Strength is the biggest difference. I hate the 800. You have to be more of a racehorse to do the 800. I think the 1,500 is easier. It’s slower, more of a mental game. It’s a well-known fact that we decathlon women are better at endurance.”

Gray, who broke the American record in the decathlon in 2019, does not want to see women’s decathlon replace the heptathlon in the Olympics.

But that is the only way things would realistically play out, according to Anita DeFrantz, an International Olympic Committee vice president.

“Most likely, it would have to switch out the heptathlon with the decathlon,” DeFrantz said. “It wouldn’t be both. The Games is not supposed to be a world championship in each sport. It’s supposed to be events that show the highest level of the sport. Having both heptathlon and decathlon would be redundant.”

She added that the I.A.A.F. would have to request the change.

Gray, who planned to discuss the issue with I.A.A.F. officials after the Tokyo Olympics, said she believed her quest for change was long overdue. “I am creating a fuss so girls that are 6 years old now get to go,” she said.