Americans champs at ping-pong table, not so much Ryder Cup 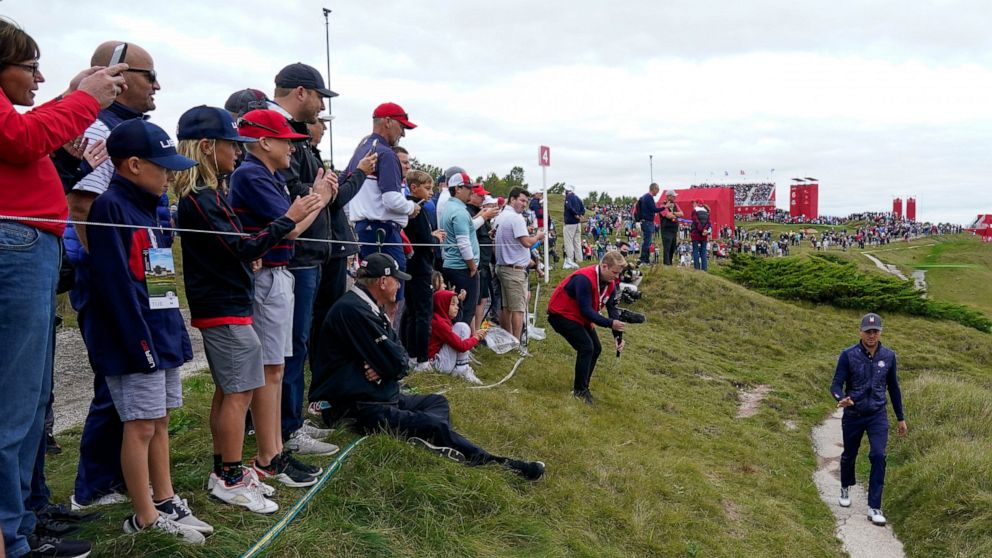 SHEBOYGAN, Wis. — Bryson DeChambeau was so excited about making the last Ryder Cup team that he went out and bought a new ping-pong paddle to bring with him to France. Patrick Reed celebrated the 2016 U.S. Ryder Cup win in Minnesota by playing ping-pong with actor Bill Murray.

And when Phil Mickelson is running off about dominating and hitting bombs, he could be talking about his ping-pong game and not his golf.

Yes, the U.S. team has struggled mightily on the golf course against the Europeans in recent years, losing nine of the last 12 Ryder Cups and four of the last five.

Give them paddles and a proper ping-pong table, though, and they turn into world beaters.

”There’s something about the hand-eye coordination and the competitive drive,” Stewart Cink said a few years ago. “I don’t know, golfers and ping-pong, they just go together.”

That’s true at least in the U.S. team room, where over the years Mickelson has faced off against players from Tiger Woods on down, and the action has gotten hot and heavy. The Americans like to describe it as a team building exercise, though it doesn’t seem to have built the kind of teams necessary to beat the Europeans.

Still, at every Ryder Cup there’s talk about the U.S. players and their ping-pong matches. The team that plays together bonds together, the theory goes, and if there’s anything the Americans are in desperate need of is some good team bonding.

So there was DeChambeau on Tuesday talking not about his feud with Brooks Koepka but his match the previous night with Daniel Berger.

“He beat me. There are obviously excuses I could make, but I won’t,” DeChambeau said. “I’m pretty sour about it.”

On an analytics driven team, there are no official stats from the ping-pong matches. No devices measuring paddle speed or the smash factor of a paddle meeting ball, either.

And no way to quantify the game’s effect on the Ryder Cup because, truth be told, there probably isn’t any.

But fun is fun. Having something to do while spending hours at a time in the team room is important.

Mickelson isn’t playing in the Ryder Cup for the first time since his rookie debut in 1995, but he is here as a vice captain. Instead of packing clubs, he packed his paddle and presumably will be in the middle of the table tennis action.

Lefty, by all accounts, is a Ryder Cup ping-pong Hall of Famer. But the best U.S. player over the years is said to be Matt Kuchar, who didn’t make this year’s team.

Kuchar is also regarded as a master trash talker, which he showed off after dispatching a young Jordan Spieth in the 2014 Ryder Cup in Scotland.

“I think Jordan Spieth was the one guy that challenged me to singles, and he got what he knew he was going to get,” Kuchar said.

While the Americans try to bond as a team at the ping-pong table, their opponents seem to have little need for the sport, which interestingly enough was invented by an Englishman. They bond the old fashioned way, which this week included watching an inspirational video about how rare it is to make a Ryder Cup team compared to other sports.

No need to manufacture team spirit among the Euros. Not when it comes engraved on the invitation to join the team.

“To be honest, my team at the moment the atmosphere is exactly where you would want it,” European captain Padraig Harrington said. “Literally, I don’t want to mess it up from here.”

The goal on both sides remains the same, ping-pong or not. The Europeans just seem to understand how to execute it better.

“We play for each other. I think that’s the best thing that you can do,” Rory McIlroy said. “You play for the guys that are beside you. You play for everyone that’s helping our team try to win this week.”

Not to mention, you play to beat those ping-pong loving Americans.

Tim Dahlberg is a national sports columnist for The Associated Press. Write to him at [email protected] or http://twitter.com/timdahlberg