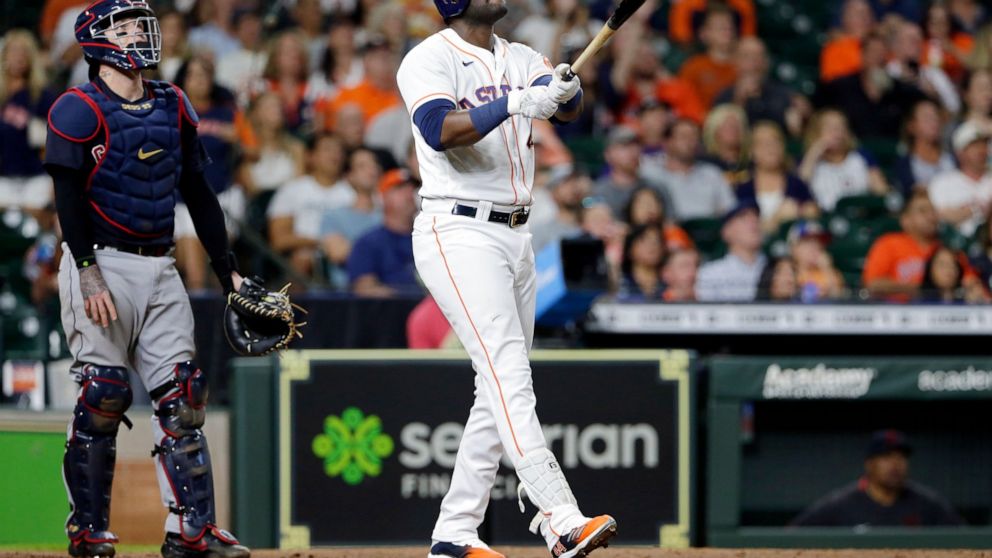 HOUSTON — Yordan Alvarez snapped an 0-for-22 slump with at two-run homer to help the Houston Astros to a 4-3 win over the Cleveland Indians on Monday night.

The Astros were up by 1 with one out in the fifth inning when Alvarez connected off rookie J.C. Mejía (1-5) on his soaring shot to the second deck in right field to make it 4-1.

Alvarez held his bat and watched the ball for a few seconds before trotting to first base, and the slugger received lots of high-fives and hugs in the dugout after ending his slump in grand fashion.

Houston starter Zack Greinke (9-3) yielded five hits and two runs in 5 1/3 innings. Ryan Pressly walked one in a scoreless ninth for his 17th save.

There were runners at first and second with two outs in the eighth when Harold Ramirez hit an RBI single on a liner to the corner of right field to cut the lead to 1. But Ryne Stanek struck out Bradley Zimmer to end the inning.

Franmil Reyes hit a solo homer and an RBI single for the Indians, whose two-game winning streak ended.

Mejía permitted seven hits and four runs while striking out a career-high eight in 4 1/3 innings in his eighth major league start.

Brantley singled with one out in the first and Houston took a 1-0 lead when he scored on a double by Yuli Gurriel.

Amed Rosario singled to start the fourth but was erased when José Ramírez grounded into a double play. Reyes followed with his blast to left field to tie it at 1-all.

Chas McCormick hit a one-out single in the bottom of the inning and reached second on a groundout by Robel Garcia. The Astros regained the lead on an RBI single by Martín Maldonado.

There were runners at first and third with one out in the sixth when Greinke was replaced by Cristian Javier. He was greeted with an RBI single by Reyes that cut the lead to 4-2. But Reyes was out at second trying to stretch the hit into a double.

Javier walked Bradley but limited the damage by retiring Harold Ramirez to end the inning.

Indians: Last season’s AL Cy Young winner Shane Bieber threw on Monday for the first time since he was shut down in June with shoulder soreness. He threw from 60 feet. There isn’t a timetable for his return. … OF Eddie Rosario (right abdominal strain) has been making progress toward a return and manager Terry Francona said he should have more information on his status later this week. … RHP DJ Johnson was optioned to Triple-A Columbus to make room from Mejia on the roster.

Astros: RHP Jose Urquidy (right shoulder discomfort) has been throwing on flat ground but it’s still unclear when he’ll return. … RHP Andre Scrubb was placed on the injured list, retroactive to July 17, with a right shoulder strain. … C Garrett Stubbs was recalled from Triple-A Sugar Land to take his spot on the roster.