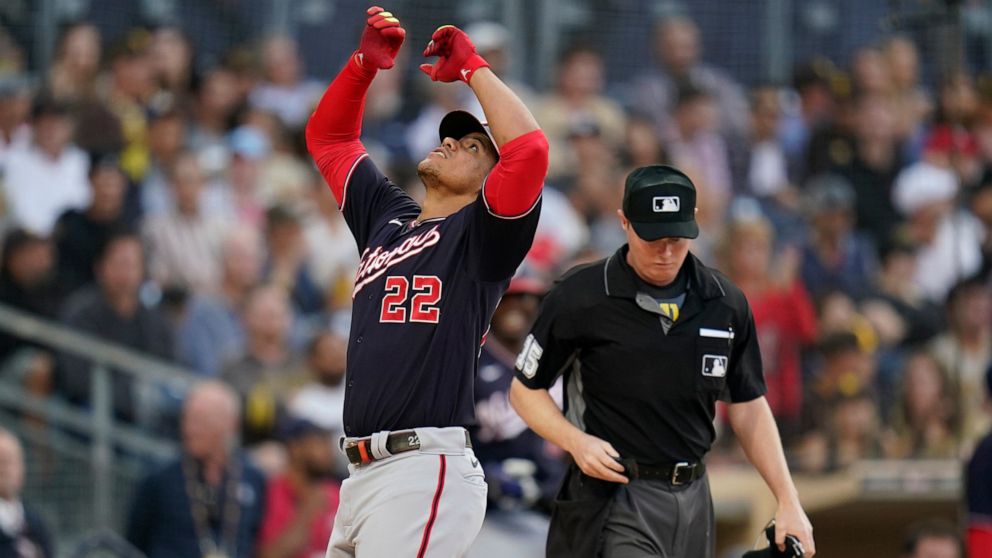 SAN DIEGO — All-Star Juan Soto is getting warmed up for the Home Run Derby.

“Yeah, (heck) yeah!” the Washington Nationals hitting star said after muscling an opposite-field, three-run homer on the ninth pitch of Wednesday night’s 15-5 win against the San Diego Padres. ”It’s going to be a nice experience and I’m going to enjoy it as much as I can.”

Soto announced earlier in the day that he’d participate in the Home Run Derby on Monday night at Coors Field. Hours later, his shot to to left-center gave the Nationals a 3-0 lead three batters into the game. It was his 11th.

Padres right-hander Chris Paddack got into trouble right away when he hit Alcides Escobar with his seventh pitch and then allowed Trea Turner’s single ahead of Soto’s first-pitch homer that had just enough to clear the fence.

“If I hit it hard in the air, I’m always thinking it has a chance,” Soto said. “So we’ve been working on it. I get it in the air enough to go over the wall and I’m just happy that happened.”

“Every time he hits the ball it seems like it’s 110 (mph) off the bat,” Corbin said. “He’s at his best when he hits it left-center there, stays on the ball and hits it hard. When you can do that and still hit homers the other way, you’re just not as fooled as much at the plate. There’s a reason he’s one of the best hitters in the game.”

Paddack (4-6) threw 31 pitches in the first inning en route to one of the worst starts in his three-year career. He allowed nine runs, eight earned, and nine hits on 75 pitches in two-plus innings. He struck out two and walked one.

The right-hander was coming off his longest outing of the season, seven innings at Philadelphia on Friday, which followed his previous shortest of the season, 2 1/3 innings against Arizona. Neither of those outings resulted in a decision.

Paddack struck out the first two batters in the second but then allowed the next five batters to reach. Josh Bell and Starlin Castro hit consecutive two-run singles to make it 7-0.

Padres manager Jayce Tingler let Paddack hit for himself in the second and he came out for the third, but failed to get an out. Josh Harrison hit a leadoff single and scored on Victor Robles’ double. Paddack committed an error trying to field Corbin’s bunt and was lifted for Nabil Crismatt. Escobar had an RBI grounder.

Josh Harrison had an RBI single in the fourth to make it 10-0. He added a two-run double in the four-run eighth to finish with three hits and three RBIs.

Corbin (6-7) held the Padres to two runs and seven hits in six innings, with three strikeouts and two walks.

Manny Machado hit an RBI single with two outs in the fifth before being lifted for a pinch-runner. Eric Hosmer, who grounded out with the bases loaded to end the first, homered off Corbin leading off the sixth, his seventh.

San Diego’s Trent Grisham hit a two-run homer in the ninth, his 11th.

The four-game series will conclude Thursday night with a marquee matchup between RHP Max Scherzer (7-4, 2.10 ERA) of the Nationals and All-Star Yu Darvish (7-3, 2.65) of the Padres. Scherzer is a three-time Cy Young Award winner. Darvish finished second in voting last year for the NL Cy Young Award.