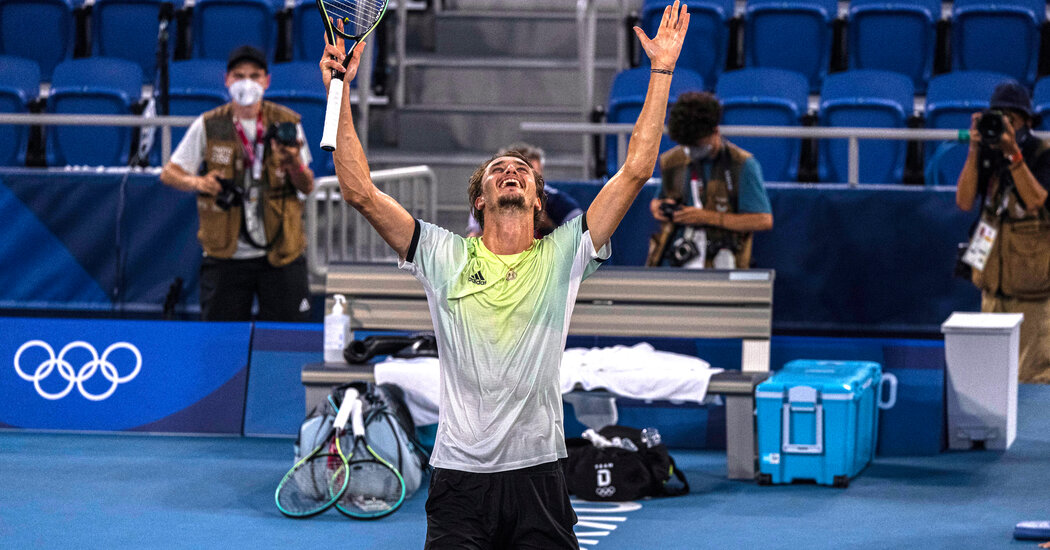 Zverev, the talented German battling to break into the highest level of his sport, won the gold medal in the Olympic tennis tournament Sunday, defeating Karen Khachanov of Russia in straight sets 6-3, 6-1.

The tournament victory was arguably the most significant of Zverev’s career, especially considering he upset Novak Djokovic, the world No. 1, in the semifinal. Djokovic, the winner of the year’s first three Grand Slam tournaments, was seeking a Golden Slam and needed the Olympic gold medal and the U.S. Open title later this summer to achieve it.

Zverev called the win over Djokovic the proudest moment of his career, but he did himself one better Sunday in beating Khachanov, 25, a powerful Russian whose game lately has shown signs of the promise that characterized his first years on the tour.

But midway through the second set against Djokovic, Zverev experienced a revelation — that he needed to stop rallying and start swinging through the ball. He reeled of 10 of 11 games to send Djokovic packing and picked up Sunday right where he left off, playing the best four sets of his career on a big stage.

“This is so much bigger than anything else in sports,” Zverev said. “The gold medal for me, the value for me is incredible because you’re not playing for yourself, you’re playing for your whole country, This is an incredible feeling for me right now.”

Zverev broke Khachanov’s serve in the third game of the first set then once more in the ninth game to take the first set, forcing Khachanov into a sloppy volley that sailed wide of the open court.

Zverev never looked back from there, bullying Khachanov with big serves and searing backhands and even sprinkling in the occasional drop shot and topspin lob.

A huge soccer fan, Zverev played in a white shirt with black trim on the sleeves — and a hint of tennis ball yellow — that was awfully similar to the uniform that Germany’s six-time World Cup champion soccer teams wear.

He looked every bit the worldbeater Sunday against Khachanov. By the middle of the second set, Khachanov had lost the zip in his legs. Down 0-5 and in danger of an embarrassing end, he whacked a ball high into the empty stadium seats.

How different a player Zverev seems now from 11 months ago when, in the late stages of the U.S. Open final, his game devolved into a series of slices and soft second serves. In that match, he coughed up a two-set lead and served for the match at 5-3 in the fifth set but could not win it. He cried during the trophy ceremony.

Zverev blasted a 130 m.p.h. ace to get to within two points of the gold medal, pushed perfect backhand volley for match point then clinched the gold medal with a blast off his forehand from the middle of the court. When Khachanov’s last swing sent the ball into the bottom of the net, he collapsed to his knees and buried his face on the pavement.

“He played an outstanding match,” Khachanov said of Zverev. “I was ready. I was prepared. I was playing good tennis.”

For Zverev, the only win that compared to the Olympic triumph is his victory in the ATP finals in 2018. But that event, while it means a lot to tennis players and delivers one of the game’s largest cash prizes, lacks the luster of an Olympic gold medal.

The last two men to win Olympic gold are Rafael Nadal and Andy Murray — Murray won it in both 2012 and 2016. Both are members of the game’s so-called Big Four, which has trimmed to the Big Three since Murray underwent hip replacement surgery.

Nadal skipped this tournament, as he did Wimbledon, and so did Roger Federer, but several of the other top players played.

“The best players in the world were here,” Zverev said. “The only one who was not here, also didn’t play Wimbledon, and that’s Rafa.”

It was lost on no one at Ariake Tennis Park that the medals were distributed by Nenad Lalovic, a member of the International Olympic Committee from Serbia. Lalovic clearly expected to be handing the gold medal to his countryman, but it was not to be.

The match played out as a protest against the Games unfolded outside the gates of the tennis center. The noise filtered into the stadium, forcing both players to adjust to the chants and banging.

The question now is whether Zverev can ride the confidence that will come from winning on the Olympic stage to help him win an elusive Grand Slam title, something just one player currently on the tour in his 20s has managed as Djokovic and Nadal retain their virtual stranglehold on the sport’s most important championships.

Grand Slam tennis is different, requiring players to win three sets instead of two, and then there is the pressure of the spotlight that has no equal in the sport. An Olympic gold medal is a step, but Zverev has no intention of it being the last one he takes, though he did not want to think about that at the moment.

“I don’t want to talk about the next Grand Slam because I just won the Olympic Games,” he said. “To me there is nothing bigger.”