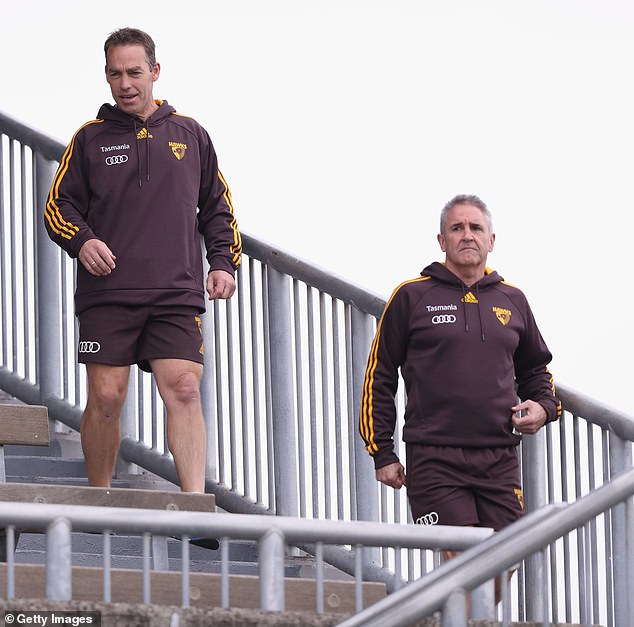 Alastair Clarkson has been urged to stand down from the Kangaroos as ‘harrowing and disturbing’ allegations emerged about his Hawthorn tenure.

It comes as current Lions coach Chris Fagan, who was Clarkson’s chief lieutenant at Hawthorn from 2008-2016 – a period in which the club won four premierships – has stood down temporarily while an independent investigation takes place.

The shocking accusations against Hawthorn were revealed after the club commissioned an external review into claims of racism, which has been delivered to the AFL.

Alastair Clarkson (left) and Chris Fagan (right), pictured while coaching at Hawthorn in 2016, are under fire after shocking allegations emerged by Indigenous players from the club

One former Hawthorn player alleged a group of senior figures at the club, including Clarkson, pressured him to get his partner to terminate her pregnancy, according to an ABC report.

The player claimed the group – which he said also featured Clarkson’s then senior assistant Fagan – also urged him to break up with his partner and move into the home of an assistant coach, the report said.

The reveleations have led to calls for Clarkson to stand down from his head coaching role at the Kangaroos, just one month after the four-time premiership mentor was signed by the club on a whopping five-year contract that is reportedly worth more than $5million. 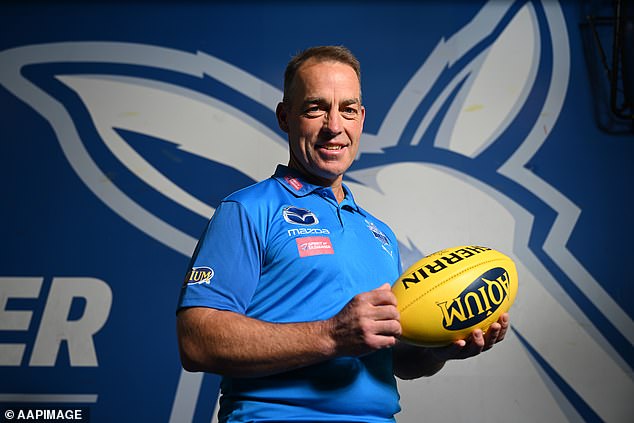 ‘The AFL has no choice. Neither does North Melbourne. Frankly, if true, neither does Clarkson and Fagan. They must step down today.

‘There will be context and/or denials, but – if true – not sure there’s any imaginable context that places human life above playing football,’ wrote Robinson.

One domino has already fallen. 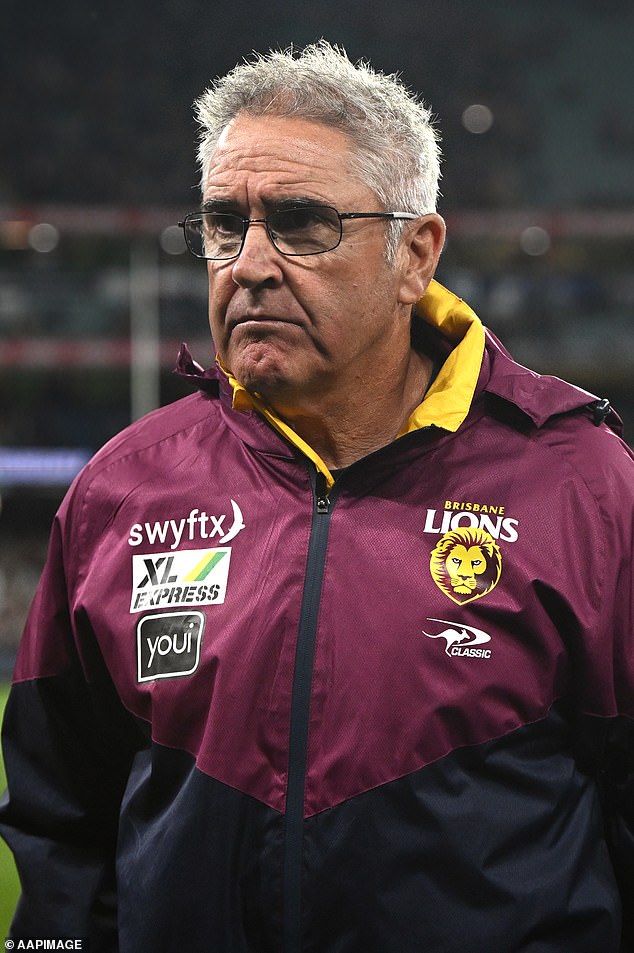 In a statement released on Wednesday morning, Brisbane confirmed Fagan would be temporarily standing down while the AFL’s independent investigation into the allegations takes place.

‘Chris supports and welcomes the investigation,’ said the statement.

‘He was not consulted during the Hawthorn sponsored review and looks forward to the opportunity to be heard as part of the AFL investigation.

‘The Brisbane Lions and Chris have mutually agreed that he will take a leave of absence from the club so he can fully cooperate in the investigation.’

Fagan was reportedly ‘devastated’ and ‘blindsided’ by the allegation, according to the Herald Sun. 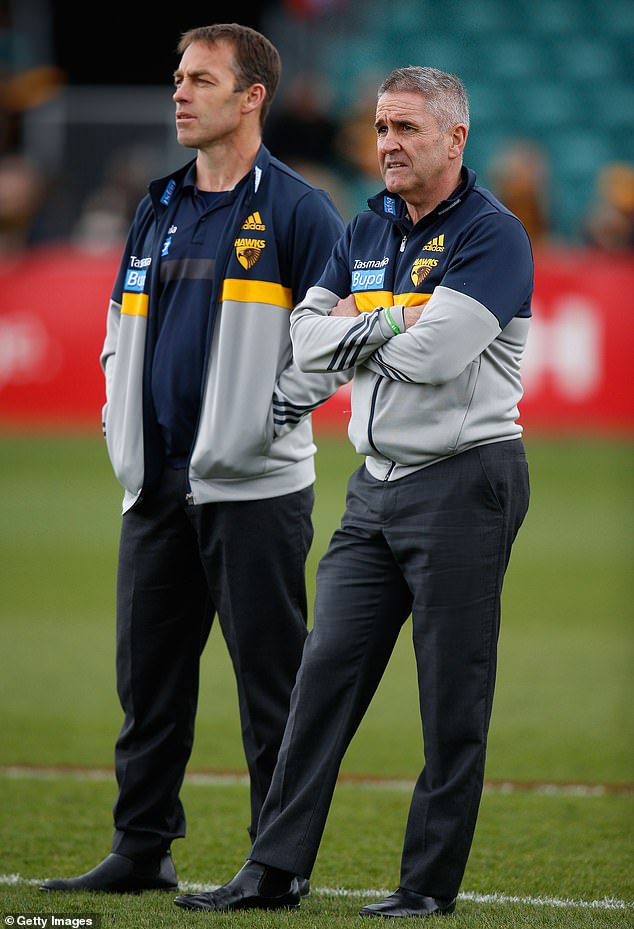 There are calls for Alastair Clarkson (left) and Chris Fagan (right), pictured prior to a Hawthorn game in 2015, to be booted from footy if the allegations are true

The allegations could not be any more serious or disturbing.

A Hawks player who is named only as ‘Ian’ in the report made startling accusations against the team’s most senior coaches.

‘Clarkson just leaned over me and demanded that I needed to get rid of my unborn child and partner,’ he claimed.

‘I was then manipulated and convinced to remove my SIM card from my phone so there was no further contact between my family and me.

‘He told me to kill my unborn child.’

It’s alleged Ian’s partner, who is known only as Amy in the report, was left in a state of deep shock when she heard the news.

‘He could barely get the words out and he seemed to be crying, and he quickly said that we needed to terminate the pregnancy and end the relationship,’ she said in the report. 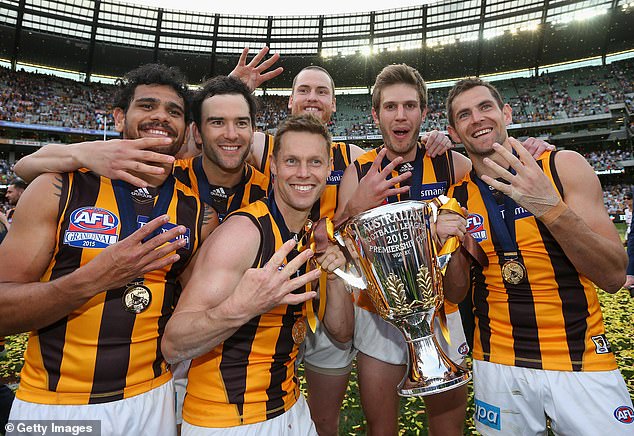 Amy further claimed the club cut her off from Ian – leaving her unable to call or text him – for the first five months of her pregnancy, which impacted his mental health.

‘I will never forget that phone call or the heartbreak I felt in that moment. I was frozen on the spot, completely numb from what I had just heard Ian say.’

Amy claimed that when the couple fell pregnant again six months after the birth of their first child together, she felt like she had to abort the baby due to pressure from the club and her desire not to ‘lose Ian again’.

She went through with the termination and hasn’t been able to forgive herself since.

‘This is a sacred thing, the bond between mother and a child, and Hawthorn wiped their feet all over that,’ Amy alleged.

‘Hawthorn says it’s the family club, yet they tore ours apart.’

The Hawks also allegedly pressured other couples to separate early on in their pregnancies or soon after their children were born, the report claims, with two of those families given assistance with mental health support from the AFL Players’ Association. 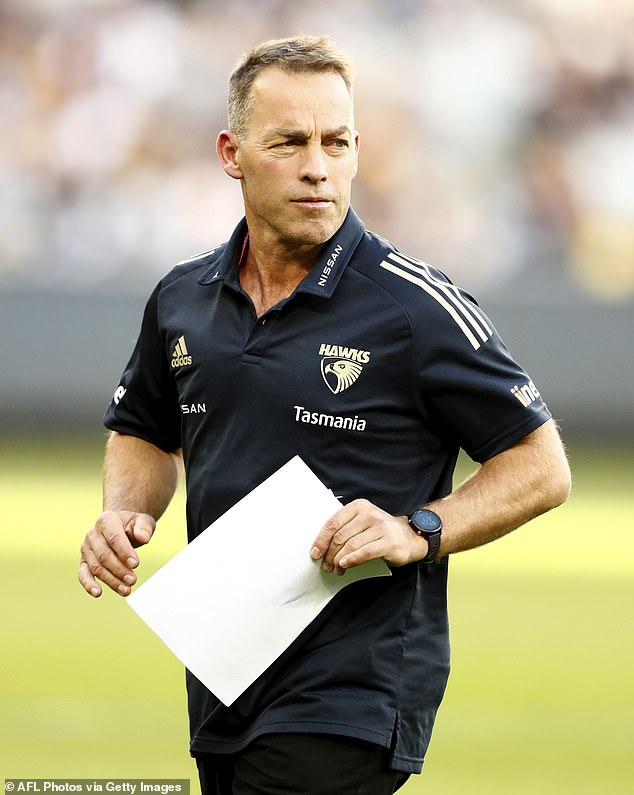 Alastair Clarkson won four premierships as coach of the Hawks, but his legacy may now be forever tainted

AFL chief executive Gillon McLachlan said the claims were harrowing and would be directed to a newly formed independent panel headed by a King’s Counsel.

‘These are serious allegations,’ McLachlan told reporters on Wednesday.

‘And it’s important that we treat them appropriately whilst also ensuring the formal process provides support to those impacted and also natural justice to those people who are accused.

‘This is a process that it’s appropriate that it is held independent of the normal AFL integrity department response.

The AFL boss said the four-person panel would be appointed within 24 hours.