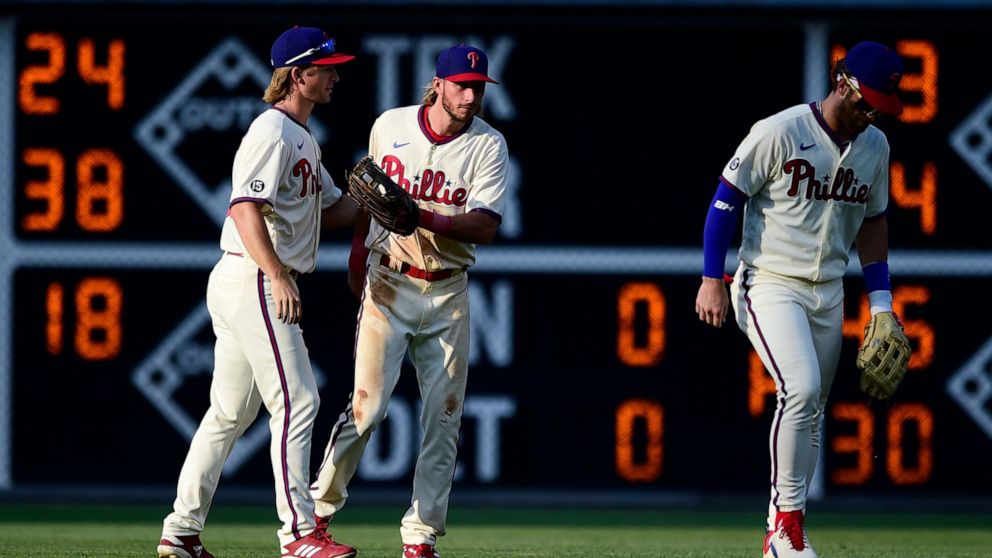 Jordan Holloway (2-2), recalled from Triple-A Jacksonville on Friday as the 27th man, didn’t allow a hit in five innings of relief after Ross Detwiler opened with a scoreless first. Holloway stuck out six and walked two. Richard Bleier completed the two-hitter with a scoreless seventh.

In the opener, Travis Jankowski drove in four runs and Matt Moore struck out nine while pitching into the fifth inning to lead the Phillies to a 5-2 win.

Marte made it 2-0 two batters into the nightcap when he hit a 2-1 curveball from Zach Eflin (4-7) over the wall in right-center. Marte’s double to right-center made it 4-0 in the fourth.

Eflin then walked Garrett Cooper, ending his night. Aguilar followed with a three-run homer to deep left off Enyel De Los Sanos to make it 7-0.

Philadelphia has won eight of 12.

In the opener, Moore gave up two runs on six hits and didn’t issue a walk in 4 1/3 innings with temperatures in the mid-90s. Archie Bradley (4-1) tossed 1 2/3 scoreless innings of relief, and Ranger Suarez struck out the side in the seventh for his third save.

“I think I’m able to get to a different level, being able to execute pitches at a higher rate, trusting the target, trusting myself and trusting mechanics,” Moore said.

The Phillies jumped on Sandy Alcantara (5-9) for three runs in the first. Bryce Harper doubled with two outs and the next two batters walked. Jankowski followed with a broken-bat, bases-clearing double just inside the first-base bag.

“It’s a bit of relief,” Jankowski said. “Off the bat it doesn’t feel great. You’re praying for something to happen.”

Rojas’ RBI double in the second pulled Miami within 3-1, but Philadelphia extended its lead in the third with two more two-out runs.

Rhys Hoskins hit a routine grounder to the left of second base. But second baseman Jazz Chisholm Jr., playing there because of the shift, first charged and then backed up on the ball before booting it. Jankowski later singled home Hoskins, and Ronald Torreyes’ run-scoring single made it 5-1.

Phillies All-Star catcher J.T. Realmuto sat out the opener, and Harper didn’t play in the nightcap.

Chisholm followed his error in the opener with another in the nightcap on Luke Williams’ second-inning grounder behind the second-base bag.

Marlins: 3B Brian Anderson (left shoulder) was scheduled to begin a rehab assignment at Triple-A Jacksonville on Friday. Anderson has been out since May 24. … OF Jesús Sánchez was placed on the injured list.

Phillies: RHP Aaron Nola is scheduled to start on Tuesday in New York against the Yankees. The Phillies ace was scratched from his last start on Sunday in Boston due to contact tracing following 3B Alec Bohm’s positive COVID-19 test. Bohm is out until at least Wednesday. LHP Bailey Falter rejoined the club on Friday after also being sidelined on Sunday due to contact tracing. RHP Connor Brogdon is expected to rejoin the club on Saturday. … INF Nick Maton was a late scratch from the opener after suffering a laceration of his right middle finger during batting practice. Torreyes started in his place at third base.