Adrift in the Venetian Lagoon 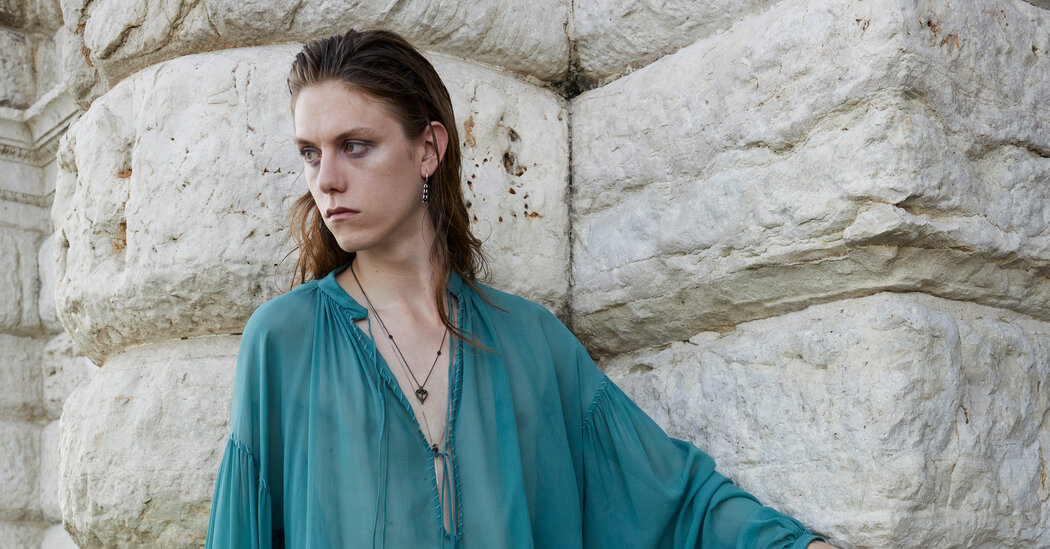 Was it the Anne Rice-style casting? Or the banal installation by the artist Doug Aitken? Was it the anachronistic clothes themselves, with their lazy nods to other eras and periods, that left a viewer with the sense that the Saint Laurent men’s wear show — like the mirrored sets on which it was held — stood as an inadvertent emblem of much that has gone amiss in the fun house of the design world, where images without identifiable source are reflected endlessly back to themselves?

The show was held this week on the sleepy island of La Certosa in Venice, a short boat ride and yet worlds away from the Grand Canal. Glimmering signs of hope have emerged lately for a city reimagined as something other than an obligatory destination for package-tour groups. In the absence of most tourists during Covid, a loose and somewhat unlikely coalition of Venetian activists has gotten more persuasive in its efforts to shift the orientation of Venice away from its historic riches and toward the fragile environment itself.

There seemed every reason, then, to rejoice when designers like Rick Owens, Pierpaolo Piccioli and Mr. Vaccarello joined artists and architects — the Venice Architecture Biennale, whose theme is “How Will We Live Together?”, is on until November — in making the city a backdrop and destination for their work. And yet, far from being a collaboration in spirit with this magical city, the Saint Laurent show left a nagging impression that it equally could have been held any place else.

In an interview with Vogue, the Saint Laurent designer Anthony Vaccarello explained that the concept for the show had been hatched more than a year ago and mothballed after Covid forced the world into lockdown. Spouting various notions about juxtaposing past with present and alluding to other time periods (that of the English “New Romantics,” for one), Mr. Vaccarello vamped on the subject of rebirth.

But recursiveness is not regeneration. And mining the archives of your house (and the back pages of others, like Haider Ackermann) for references is no substitute for coming up with something fresh. The sense of déjà vu all over again increasingly made this viewer itchy as he watched the bony, tattooed models move through sets created with the intention of reflecting the thrillingly various moods of the Venetian sky.

The boys (they seemed hardly more than that) appeared bloodless, lacking vitality or agency — passive even by the standards of their profession. Not for the first time at a fashion show, I found myself asking “Who is this for?” What Gen Z guy is eager to costume himself in stovepipe flood pants, big-shouldered jackets with the sleeves rolled up, billowing cloaks, lacy pirate shirts, platform boots or leopard-patterned winkle-picker shoes?

Like a lot of designers, notably his influential predecessor Hedi Slimane, Mr. Vaccarello appears eager to conjure up a type or a tribe, something on the order of what Mr. Slimane did at the label and as Olivier Rousteing accomplished in conscripting followers by the millions for his so-called Balmain Army. Yet, as outlandishly glitzy as some of Mr. Rousteing’s efforts can be, he is always persuasive. Wherever the imaginary club his Balmain kids were headed to, you wished you could tag along.

Instead, as the Saint Laurent models sloped around the Aitken set, one kept visualizing those same guys dropping the affectless poses as they whipped backstage after the show and changed into the saggers and Allbirds that are their generation’s default uniform.

In mind’s eye, it was easy to envision them tucking skateboards beneath their arms for the vaporetto trip to the mainland and, eventually, to that other Venice — you know, the one in Mr. Slimane’s transplanted home, Southern California.