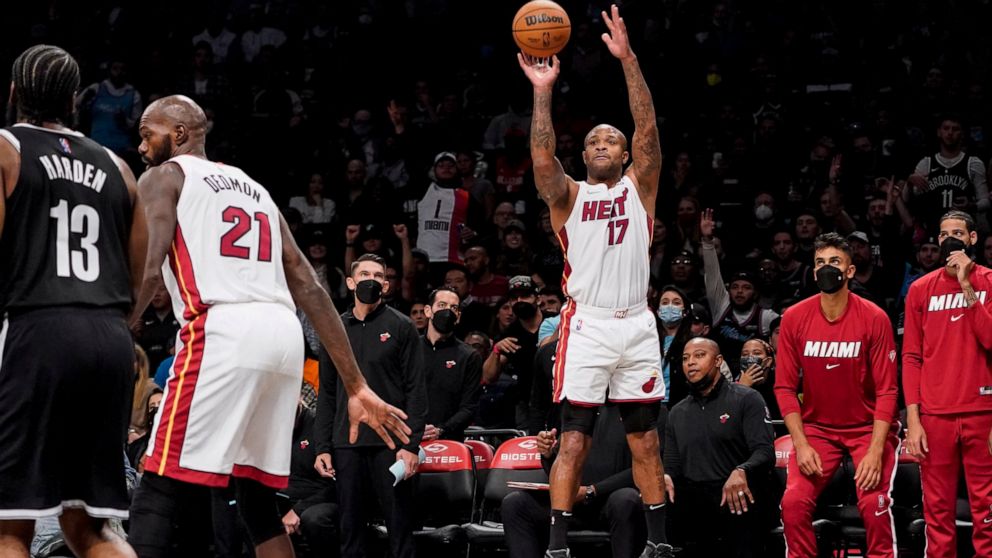 NEW YORK — Bam Adebayo had 24 points and nine rebounds to lead the Miami Heat to a 106-93 victory over the Brooklyn Nets on Wednesday night.

A preseason favorite to win the NBA championship, Brooklyn has alternated losses and wins through the first five games of the season and dropped to 2-3. Kevin Durant finished with 25 points and 11 rebounds.

Joe Harris contributed 15 points on 5-for-15 shooting, including 5 for 11 from 3-point range. With his third 3-pointer of the game, Harris passed Jason Kidd as the franchise’s career leader in made 3-pointers.

James Harden had 14 points and Bruce Brown chipped in with 12.

The first of four regular-season matchups between the Eastern Conference rivals was a contrast in styles, the flashy, up-tempo, high-scoring Nets against a physical Heat squad.

Despite forcing the Nets to play a possession-by-possession game for much of the first half, the Heat trailed 51-49 at the half. Miami had outscored Brooklyn in the paint (30-20), had more second-chance points (15-2), and had a decided edge in rebounds (35-25).

What the Heat did not have, though, was the tandem of Durant and Harden, who combined for 25 of Brooklyn’s 51 points in the half. Durant also grabbed eight rebounds while Harden added three boards and three assists.

Miami stayed with its approach and it paid dividends in the third quarter, as the Heat outscored the Nets 32-23 and took an 81-74 lead into the fourth. The Heat extended their lead to 88-77 before Brooklyn used a 7-2 spurt to cut the deficit to 90-84.

Following a timeout, Durant stared down Butler as he drilled a 3 to bring Brooklyn with three. That was as close as the Nets would come, as Miami pulled away, with Adebayo throwing down two thunderous dunks.

Heat: Entering Wednesday, the Heat were limiting opponents to 27% on 3-point attempts but were also yielding 41 attempts from behind the arc per game. “It was similar last year,” coach Erik Spoelstra said. “I’ll be honest, we haven’t totally wrapped our mind around it. We’re working on it. I don’t love giving up that many 3s (but) you can’t take away everything. This game is different than it was five, six, seven years ago. And we’re still trying to figure it out.”

Nets: Through four games, Durant was averaging 31 points and had 23 assists (5.75 per game). “I think Kevin has taken on more of a leadership role with the ball in his hands,” coach Steve Nash said before the game. “He’s found a nice balance between still leading us in scoring and also facilitating; looking for his teammates. For such a gifted, historic scorer, he really is an unselfish player. I think inside—in his mind, in his heart—he’d be quite happy to pass the ball all night if it was successful. I think he shoots more I think when he needs (to). “