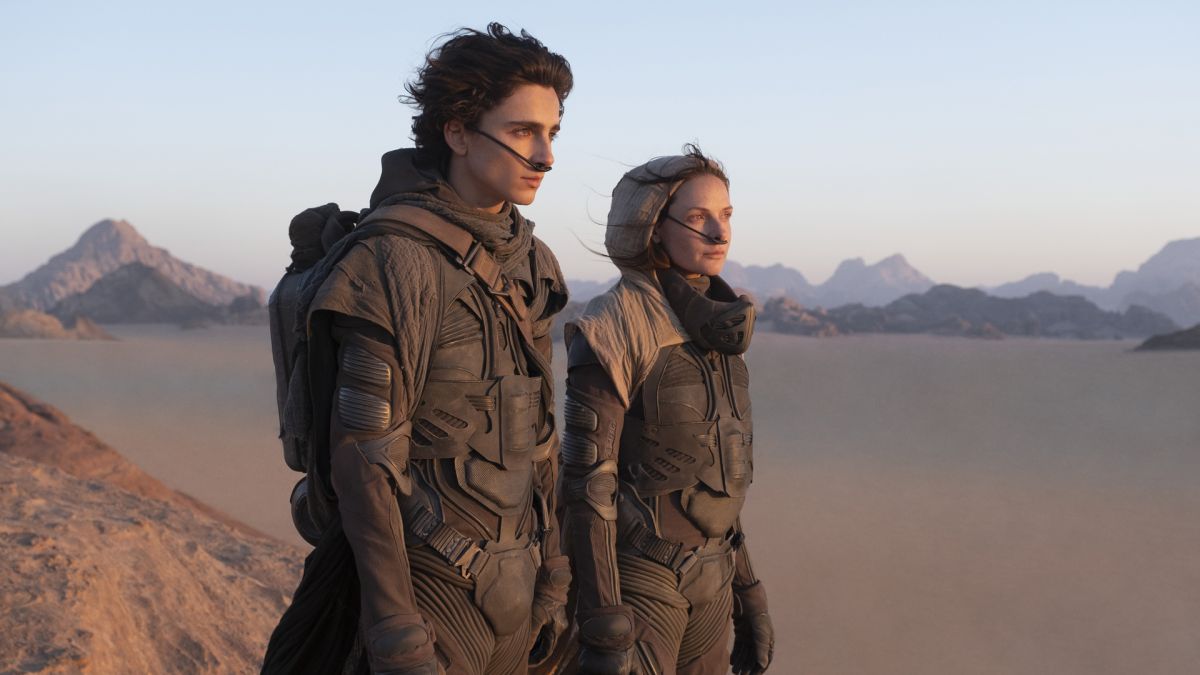 How do you go about adapting Dune? It’s a question that numerous studios and filmmakers have struggled to answer, including legendary director David Lynch.

And with good reason. On the surface, the plot of Frank Herbert’s iconic sci-fi novel seems straightforward: it’s a coming of age story focused on Paul Atreides, a young man who’s destined to alter the fate of the galaxy.

It’s anything but. With a sizable cast of intriguing characters, a dense narrative and themes like environmentalism, politics, gender dynamics and religion, Dune is a convoluted tale that many have failed to do justice to. Now, with Blade Runner 2049 director Denis Villeneuve at the helm, Dune’s latest film adaptation has the potential to be worthy of Herbert’s seminal novel.

Even so, the question persists: where do you begin with making a movie based on this iconic literary piece of work?

“Every movie I’ve made has had its challenges,” Villeneuve explains. “But what was singular about Dune was that every scene was demanding. By far, it’s the most complex movie I’ve ever done.”

Ahead of its October 21 release, TechRadar sat down with Villeneuve to discuss the challenge of adapting Dune. We talk about bringing the novel’s iconic sandworms to life, how Villeneuve’s childhood influenced the film’s aesthetic, and why it was the most complicated production of his career.

Fear is the mind killer

Set in the distant future, Dune follows Paul (Timothée Chalamet) and House Atreides as they assume control of Arrakis, an unwelcoming desert planet, at the Galactic Emperor’s request. Arrakis is the universe’s only source of ‘spice’, a priceless substance that’s necessary for interstellar travel and gives superhuman abilities to those who use it.

It was this potent mix of ideas that fascinated Villeneuve when he discovered Herbert’s novel as a teenager. A self-confessed diehard Dune fan, Villeneuve didn’t need a second invitation when Warner Bros. approached him about the prospect of making a new Dune movie.

With his involvement confirmed in February 2017, Villeneuve began the process of bringing his dream project to life. Demanding and daunting as it initially appeared, the visionary director had two major advantages on his side.

The first saw Villeneuve hire many of his Blade Runner 2049 department heads – reunions that, given their existing working relationships with Villeneuve, allowed Dune’s pre-production phase to get off to the best possible start. The second, meanwhile, involved Villeneuve recalling designs for Dune’s many locations, characters and vehicles that he’d imagined almost 40 years earlier.

“I fueled the screenplay [written alongside Eric Roth and John Spaihts] with as many images that came to mind when I first read the book,” Villeneuve explains. “When I was storyboarding, I tried to go back to the origins of those images and capture the emotions that I had [as a teenager]. Once I’d produced the sketches for the characters, vehicles and architecture, [production designer] Patrick Vermette took that visual language and expanded on it to create the world that you see.”

A force of nature

With the screenplay finished, and all-star cast and backstage crew in place, by January 2019, Dune’s breathless four-month shoot began in March. Locations including Norway, Hungary and the UAE were chosen as stand-ins for Caladan (House Atreides’ homeworld), Giedi Prime (House Harkonnen) and Arrakis respectively.

Filming in real-life environments was vital for Dune to capture one of the core pillars of Herbert’s novel: namely, the beauty and ferocity of the natural world.

“[Director of Photography] Greg Fraser was essential for this project,” Villeneuve says. “Greg has the ability to play with natural light that I’ve rarely seen in other people’s work. I wanted the film’s imagery to seem as realistic as possible and for audiences to feel something familiar with the environment. I didn’t just want to capture the beauty of nature; I wanted to capture its power.”

With Arrakis serving as the story’s main location, Villeneuve and Fraser wanted to create a distinct feel and aesthetic for scenes set on the hostile planet. Handheld IMAX cameras were used for desert wide shots, as well as Paul’s visions of the Fremen, to distinguish Arrakis from other settings. In contrast, Caladan and Giedi Prime-based sequences were filmed in a 2.35:1 aspect ratio.

Shooting in IMAX also allowed the sheer size of Arrakis’ enormous sandworms to be fully realized. Described as beasts that could grow up to 450 meters long in the novel, Dune’s iconic creatures pose a major threat to the planet’s human population and ‘spice’ mining operation.

Taking cues from John Schoenherr’s original artwork, Dune’s chief creative team settled on a design that honored the source material and felt modern in style. Despite their fantastical size, though, Villeneuve was eager for the sandworms to be grounded in realism – and that meant researching various forms of the invertebrates to get their movements and mannerisms right.

“We spent months creating a design that would fit Frank Herbert’s description and be in the spirit of the book,” Villeneuve explains. “But then everything had to make sense from a science point of view. The way it moves, feeds, attacks, evolves, modifies the landscape and survives in this rough environment has to be realistic.”

It was up to VFX supervisor Paul Lambert and animation studio Double Negative to give life to the sandworms. In total, it took almost two years for the sandworms’ design and animation to be completed. As spectacular and terrifying as they look, Villeneuve also credits his cast with helping to express the sheer dread that they’d evoke if one was charging you down.

“It [the sandworms] was probably the most challenging VFX of the movie,” Villeneuve adds. “But even if you have the best VFX in the world, if the acting is bad, the world won’t exist. I give a lot of credit to Timothée and Rebecca Ferguson because, in their eyes, they make me believe that’s what they were facing.”

A film of Dune’s scale doesn’t come without its production issues. The movie’s largest set-piece, where House Harkonnen and the Emperor’s Sardaukar forces attack House Atreides, was a major technical challenge, with numerous small-scale skirmishes playing out amid the main battle’s backdrop. Animating the sandworms’ movements across the desert, as if they’re swimming in water, was also far from straightforward.

Villeneuve, though, singles out filming in Jordan’s Wadi Rum region as the most gruelling aspect of the entire production. The cast and crew spent a month filming various scenes, including aerial shots and the sequence where Chalament’s Paul and Ferguson’s Lady Jessica are chased by a sandworm in the third act.

With an 800-strong crew and a limited amount of time to complete the shoot, Villeneuve insists that filming this part of the production was the most taxing experience of his career so far.

“I knew that, in order to respect the schedule and budget, I had to fit everything into those days,” he says. “We shot non-stop for a whole month and I’ve never done that before in my life. It was physically challenging and every scene was complicated to shoot.”

Currently, the stresses and strains of Villeneuve’s most demanding project appear to be paying dividends. Ahead of its North American release, Dune has amassed $129 million at the international box office and, according to box office projections, is tracking to make a further $40 million from US and Canadian theaters. For a movie developed on a budget of $165 million, Dune will hopefully make a tidy profit for Warner Bros. and Legendary Entertainment. And that’s even in the face of the pandemic and Dune’s simultaneous release on HBO Max, which are sure to reduce its box office takings.

Still, Villeneuve is in the dark over the prospect of making Dune Part 2. As visually striking and wonderfully ambitious as Dune is, its story feels incomplete. Dune’s cast and crew, then, are likely relying on Dune’s profitability in order for a sequel to be greenlit. That does seem more likely now, with WarnerMedia Studios CEO Ann Sarnoff telling Deadline that “If you watch the movie, you see how it ends. I think you pretty much know the answer to that.”

If a sequel isn’t forthcoming for whatever reason, it would be disappointing that Villeneuve wouldn’t fully realize his vision for his Dune movie duology. Based on how good Dune Part 1 is, he deserves to finish what he started. It would make those difficult days in the Jordanian desert worth it. But, unless moviegoers are enticed to see Dune in theaters, the choice may be taken out of his hands. And that would be a damn shame.

Dune is out now in theaters worldwide, as well as on HBO Max in select countries.