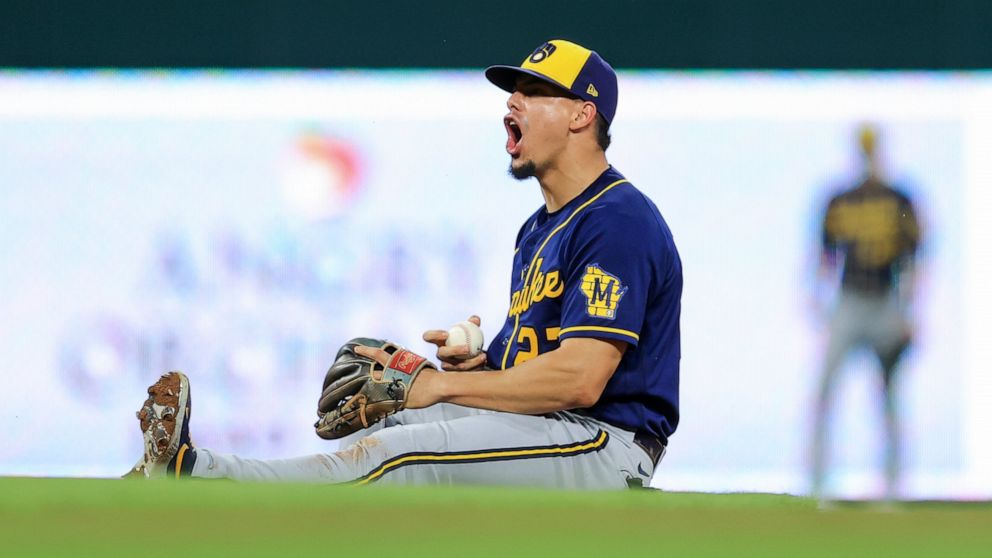 CINCINNATI — Willy Adames homered and drove in four runs as the Milwaukee Brewers rallied to beat the Cincinnati Reds 11-6 on Friday night.

Adames had a two-run shot in the fifth inning and then doubled home two more in a five-run eighth that buried the Reds.

After losing three straight to the Reds in Milwaukee before the All-Star break, the Brewers won the first of a three-game set in Cincinnati and pushed their lead in the NL Central back to five games.

With the Reds leading 5-3 in the sixth, Luis Urías hit an RBI double against Tyler Mahle. Reliever Amir Garrett (0-3) came in and Jackie Bradley Jr. hit a bouncing ball deep into the shift that second baseman Jonathan India misplayed, allowing Urías to race home with the tying run.

Kolten Wong, playing his first game since coming off the injured list, singled home Bradley for the Brewers’ first lead of the night.

Reliever Brent Suter (9-4) allowed an unearned run in the fifth.

Urías hit a one-out homer in the eighth, Adames drove in two with a double, and two more runs scored on wild pitches by Ryan Hendrix to give Milwaukee a six-run lead.

Tyler Naquin and Eugenio Suárez hit two-run doubles and Aristides Aquini homered for the Reds, who lost for the third time in the last 12 games.

Reds: All-Star RF Nick Castellanos was replaced after getting hit in the arm with a pitch in the third inning. … RHP Michael Lorenzen (shoulder) was activated from the injured list Friday. … RHP Art Warren (left oblique strain) went on the 10-day injured list. … RHP Jeff Hoffman (shoulder) is expected to wind up his rehab and could get a start next week against the New York Mets, manager David Bell said. … RHP Sonny Gray (rib cage strain) is expected to start Sunday after landing on the injured list July 8.

The Brewers send All-Star right-hander Brandon Woodruff (7-4, 2.06 ERA) to face Reds right-hander Luis Castillo (3-10, 4.65) on Saturday night. The hurlers started against one another on Sunday but neither figured in the decision. Woodruff worked six scoreless innings and Castillo gave up a run in 5 1/3.