‘A Recipe for Catastrophic Fire’: How an Oregon Blaze Became the Nation’s Largest 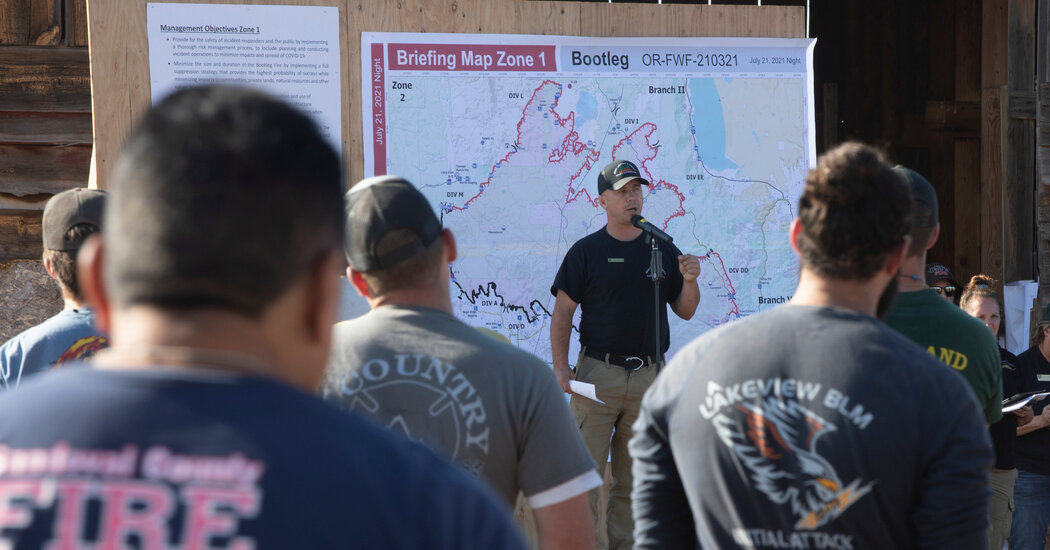 BLY, Ore. — Smoke smeared the sky gray. A tractor-style logging machine sat abandoned and charred in a field. Hundreds of firefighters raced across miles and miles of forest land, often outnumbering the populations of the small towns that speckle southern Oregon.

A lightning strike on a brittle-dry Oregon mountain slope set off a blaze that has grown larger than the city of Los Angeles, revealing the challenges of curbing small blazes that can explode into colossal wildfires.

The Bootleg Fire, named for a nearby creek, has raged in a way distinguishing it from dozens of other wildfires in a devastating summer: For the better part of two weeks it burned in erratic and extreme ways that in most fires last only a day or two. Flames tore on and on through whole stands of trees. High winds sent embers long distances, sparking new fires. The Bootleg Fire grew to more than 600 square miles and sent smoke and haze across the country.

Mr. Carlson said he had heard seasoned fire veterans describe the Bootleg Fire as having “fire behavior they haven’t seen in 20 years.”

Experts said several factors were contributing to the fire’s extreme behavior and its immensity. Global warming has caused soils and vegetation to dry more, making wildfires spread more easily. A harsh heat wave in the Pacific Northwest, coupled with a monthslong severe drought, made the Ponderosa pines and other vegetation even more ready to burn.

Beyond the heat and dryness, experts say decades of forest-management policies are partly to blame for the Bootleg Fire and many other large blazes. Under aggressive fire-suppression policies, every fire, no matter how small, is extinguished. But fire ecologists say it is better to allow some smaller fires to simply burn, or to conduct controlled burns, to consume the underbrush that ends up feeding much larger blazes.

“All of this has created a recipe for catastrophic fire,” said James Johnston, a researcher with Oregon State University’s College of Forestry. “We’ve been baking this cake for some time.”

For more than 2,300 firefighters from at least 30 states, the blaze has been a vexing challenge. Winds gusting through a vast tinderbox of undergrowth made the fire balloon in size and merge with a smaller blaze.

The fire has destroyed at least 67 homes and 117 smaller structures like sheds and garages. Two firefighters have been injured. No civilian injuries or deaths have been reported, but the fire threatens thousands of residences.

“We’re the largest fire in the country right now,” said Marcus Kauffman, a spokesman for the Oregon Department of Forestry. “It’s not a comfortable situation.”

Rob Barr, a captain with the Valencia County Fire Department in New Mexico on his fifth day at the fire, has been overseeing a team putting out smoldering tree stumps and small structures.

“The challenge for my crews is getting enough rest and sleep during the day because it’s so hot,” Captain Barr said.

Outside Bly, an unincorporated town with one gas station about seven miles from the fire, a firefighter camp called a forward operating base took over the usually tranquil fields. Fire crews rotate through 14-day stretches, working 16-hour shifts. Bly’s population is 486; the base’s is about 1,700.

The tents where firefighters sleep and eat lack tables and chairs. Many gather instead around the fire engines they drove from out of state, seeking shade from their trucks in punishingly hot Pacific Northwest afternoons.

“That is the benefit of doing night shift,” Captain Barr said.

The coronavirus, too, has been a challenge. Officials said two firefighters at the camp had tested positive for Covid-19.

The infected firefighters were being sent home, and the crews they had worked alongside were being isolated from the rest of the camp.

“I need to ask you folks to follow the social distancing, the handwashing,” Tyler McCarty, a deputy incident commander, told firefighters gathered for a briefing on Wednesday.

Oregon is hardly alone in facing wildfire threats this summer, with 79 large fires now burning in 13 states, including new blazes in California, Montana and Wyoming. This year, fires have burned nearly 2.7 million acres in the United States.

The lightning strike that the authorities say started the Bootleg Fire was found to be on the slopes of Fuego Mountain in Klamath County. Natural causes of major wildfires are relatively rare. People, sometimes by discarding cigarettes or setting off fireworks, start more than 80 percent of wildfires in the United States.

In the early days of the fire, it produced intense updrafts that created towering clouds of hot air, smoke and moisture. Those enormous fire-generated clouds, called pyrocumulus, can regularly reach 30,000 feet. The fire also generated at least one cloud that rose to 45,000 feet and produced lightning strikes.

Experts said they were gleaning lessons from the blaze, especially in making forests more resilient to fire. Over the weekend, flames had threatened the 30,000-acre Sycan Marsh Preserve, which is owned by the Nature Conservancy.

Pete Caligiuri, forest program manager for the conservation organization, said he and six other people had evacuated from a research station at the preserve after setting up hose lines and sprinklers around the structures.

For more than a decade, researchers at the preserve have thinned dead branches and underbrush and conducted small prescribed burns. The goal has been to restore the forest to conditions that existed before widespread settlement of the West, when small fires were allowed to burn — removing a lot of fuel, making surviving trees more fire resistant and reducing the likelihood of large fires.

“Those systems were very resilient to and tolerant of frequent fire,” Mr. Caligiuri said.

The Bootleg Fire eventually reached the preserve, Mr. Caligiuri said, but reports from firefighters suggested that the thinning and prescribed burns might have made the fire less intense.

Outside the preserve, dead branches, shrubs and other vegetation on the ground had allowed flames to climb to the top of the trees and spread rapidly and intensely. But when it reached the Nature Conservancy land, Mr. Caligiuri said, there was not enough fuel near the ground for the fire to burn as hot and the flames to reach as high.

Elsewhere, experts said, there were signs that the fire was slowing.

Derek Williams, a National Weather Service meteorologist, said the strong winds that had been rapidly pushing the fire to the east had lessened midweek. That gave firefighters a chance to create firebreaks and do other work in an effort to prevent the blaze from reaching unburned areas.

Rain earlier in the week may also have helped tame the fire slightly, he said.

Because of the calmer conditions, Mr. Williams said, the fire was no longer exhibiting some of the extreme behavior seen during its first weeks. Still, the possibility of a new threat loomed.

A mass of hot, dry air was expected to move into the region over the next few days, officials said, offering the prospect of more active fire conditions. “That could really dry things out again,” Mr. Williams said.