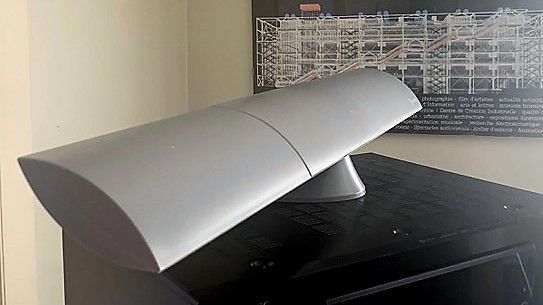 Antop’s AT-500SBS’s 30-inch width pays off in strong signal-pulling, while its free iOS/Android app helps find the best setup location in real time. Mounted horizontally in a window (vertical mounting proved not quite as effective in our test location) it pulled nearly as many stations as the old-fashioned attic-mounted VHF/UHF antenna in the attic above it.

The Antop’s included signal-amplifier has two outputs, so you can feed a TV and an FM radio (or two TVs) – a nice plus. The antenna’s size makes it tough to hide (unless you have conveniently located drapes or valences), but its attractive form and availability in white, black, or titanium finishes are plusses. If you need maximum pulling power from an indoor antenna, the 500SBS is about as good as it gets.

Antop makes a wide range of sleek-looking “housed” indoor antennas, of which the 500-SBS is the top model: a swoopy, 30-inch bar that can be wall-mounted horizontally or stood vertically on a supplied plastic base.

The included in-line amplifier drives two standard F-connector outputs for two TVs or a TV and an FM radio or receiver. The supplied 5-foot cables are too short in our opinion, though many indoor antennas come with fixed cables of insufficient length to reach your set from the optimal antenna location.

Antenna design is a pretty thoroughly understood art. Size and number of elements (the rods visible on old-fashioned roof antennas) are the important variables, so shoppers should accept that performance variations will be small among similar-size and -format models.

Also note that the RF amplifiers incorporated in some antennas simply cannot conjure up more stations. What they do is help overcome losses in the “down-lead” between the antenna and the receiver (TV) and, in rare cases where the receiver is insufficiently sensitive, raise very weak signals above the tuning threshold. But, most of all, shoppers should observe that location, orientation, and especially elevation are the most important factors when it comes to antenna performance.

I test antennas in a semi-rural location with good elevation and clear line-of-sight nearly 360 degrees to TV transmitters ranging from about 15 to about 70 miles in all directions. Because all antennas are to some degree directional, I place indoor ones in or across a south-facing window. The 500SBS is not an antenna that users are likely to re-orient to optimize reception in a particular direction, so, as always, my evaluation reflects this single location and setup.

Antop’s 500SBS acquired 14 usable signals from six different directions around the compass. By that, I mean 14 individual carriers: counting all the sub-channels (5.1, 5.2, etc.), it delivered 57 discrete channels. (It’s the main carriers that matter when it comes to antenna reception.)

Two more signals were tuned, but intermittent blocking and digital noise rendered them unusable. Significantly, one of these was only about 25 miles away but being located roughly SSE from my location was almost exactly “off-axis,” that is, at right angles to the Antop bar’s facing direction.

The other iffy signal, though originating almost due south, was a “channel-share” (of possibly lower signal-strength) from a tower about 75 miles distant. (As an aside, vertical orientation in the same location sacrificed three of the weakest signals. I would guess that horizontal placement will almost always yield the best performance.)

Although I’m not able to test antennas in a signal-dense urban setting, I would predict that the Antop’s RF amplifier’s “Boost” knob would serve to attenuate overly strong signals to make the antenna usable in such a spot.

Should you buy the Antop SmartBar AT-500SBS  ?

You want the most powerful indoor antennaA good choice if you live in a suburban, fringe, or rural/semi-rural location and cannot or will not consider an outdoor antenna.

You’re fine with having a large indoor antennaThe Antop’s size is substantial, so that’s something you’ll need to to accommodate.

You need to pull signals much more than 65 milesThe AT-500SBS’s performance starts to flag at the ragged edge of 70 miles, so if you want to tune stations beyond that distance, consider an outdoor antenna instead.