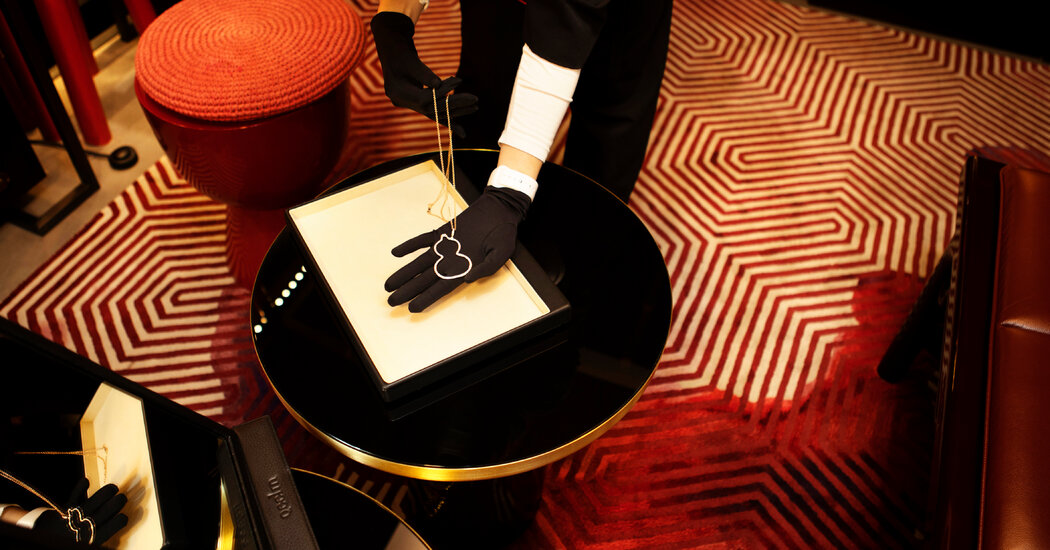 Since its inception in 2004, the goal of the Chinese jewelry brand Qeelin has been to create — as Dennis Chan, its Hong Kong-based co-founder and creative director, put it — “something with a rich culture but, at the same time, very contemporary.”

The effort may be working. There are 38 Qeelin stores in mainland China, but the brand also has operated a boutique on Place Vendôme in Paris, a hub of high jewelry, since 2019. It is sold at department stores and boutiques such as David Jones in Australia and New Zealand to Holt Renfrew in Canada, where it has become a top selling jewelry brand, according to Carolyn Wright, a vice president of buying.

And during the next couple of years, the house intends to open brand-name boutiques in England, Australia and the United States, according to Jean-François Palus, the group managing director at Kering, the French luxury group that acquired majority ownership of the brand in 2012.

He said that about 90 percent of Qeelin’s 2020 sales were in greater China, but that “we are quite convinced that this brand is appealing to all sorts of customers.”

The brand is not as well known as Kering labels like Gucci or Balenciaga, but, Mr. Palus said, its sales have multiplied tenfold since it partnered with the French corporation (Kering does not disclose the sales figures for most of its individual brands, including Qeelin).

“We started with a toddler and now we have a teenager,” Mr. Palus said, “and we think that this teenager is going the right way.”

Most of Qeelin’s pieces — which range from pieces priced at less than 6,000 renminbi, or $926, to an elaborate 2.2-million renminbi diamond necklace — blend centuries-old Chinese symbols with designs that are cosmopolitan, informal or just fun. (The brand’s name has a similar approach: Qeelin is a twist on Qilin, a mythological, unicorn-like creature in China.)

In the Wulu collection, for example, a traditional Chinese good luck charm is finessed into a sleek shape that resembles the contours of a guitar or, perhaps, the outline of a woman’s back. Variations render that curvy silhouette as a rose gold pendant with red agate (21,000 renminbi) and with diamonds and rubies dangling on a pair of earrings (13,500 renminbi).

The Yu Yi collection features a Chinese symbol that is believed to offer protection; Bo Bo’s pieces look like pandas, which, in the aftermath of China’s “panda diplomacy” of the 1970s, have become a symbol of peace.

Qeelin designs frequently include diamonds, frequently mixed with semiprecious stones like onyx and mother-of-pearl rather than the 24-karat gold popular for traditional Chinese jewelry.

That customer tends to shop for jewelry in a different way than her parents or grandparents, who typically bought gold for its value rather than as a fashion statement. “A lot of young consumers now buy jewelry in more of an accessory way,” said Kemo Zhou, a Shanghai-based retail analyst for Euromonitor International.

Essentially, she added, “they care more about what it looks like.”

Outside of China, the meanings behind Qeelin’s designs seem to add to their allure. “There’s a story that’s really alive behind the brand and each of Dennis’s collections,” said Ms. Wright of Holt Renfrew. “There’s more than just the jewelry piece that’s being purchased — there’s the spirit of the product that comes with it.”

Mr. Chan echoed the idea. “If you’re telling them a very heavy Chinese story — blah, blah, blah and all that — they will never listen,” he said. “But then, through some designs, they will understand Chinese culture in a fun way, in a different way.”

There are many successful Chinese jewelry brands — including the two Hong Kong businesses Chow Tai Fook, one of the world’s biggest jewelry labels, and Chow Sang Sang — but industry experts say that Qeelin’s combination of talisman and trend is distinctive.

“You don’t see any Chinese brands that take such a cultural history and can turn it into something so modern,” said Tiffany Mon, a vice president at Carat & Co., an upscale jewelry and watch boutique in Flushing, Queens, a predominantly Asian American neighborhood.

The store exemplifies why Qeelin is not more widely known in the United States: Carat & Co., which caters to a Chinese clientele, is the brand’s only point of sale on the East Coast. But most of the other luxury labels that Carat carries — like Bulgari, Chopard and Montblanc — also are available in Midtown Manhattan, a much larger retail world that is only about 12 miles away.

There does appear to be a strategic logic, at least for now, for Qeelin to focus on communities like Flushing. “There’s an obvious group for you to try with first, to market to first,” said Derek Scissors, the chief economist at the China Beige Book, which markets itself as an independent economic information source on the country. “You’re not wandering around in the dark.”

“If you’re selling luxury goods, this group tends to be wealthy,” he said. “They’ve left China with money, or their children are there and have tended to do well, so you can start with that group.”

Controversy in the United States and Europe over China’s forced-labor practices in Xinjiang cotton, its crackdown on Hong Kong’s pro-democracy movement and general trade issues could hinder public acceptance, however.

“The potential is there for anti-Chinese sentiment to spread in the consumer sector,” Mr. Scissors said, although he added that concerns like the possibility of spyware’s being embedded in computers has not affected sales of Chinese brands like Lenovo in the United States.

“Yet it’s something that Chinese firms have to think about as a risk,” he said.