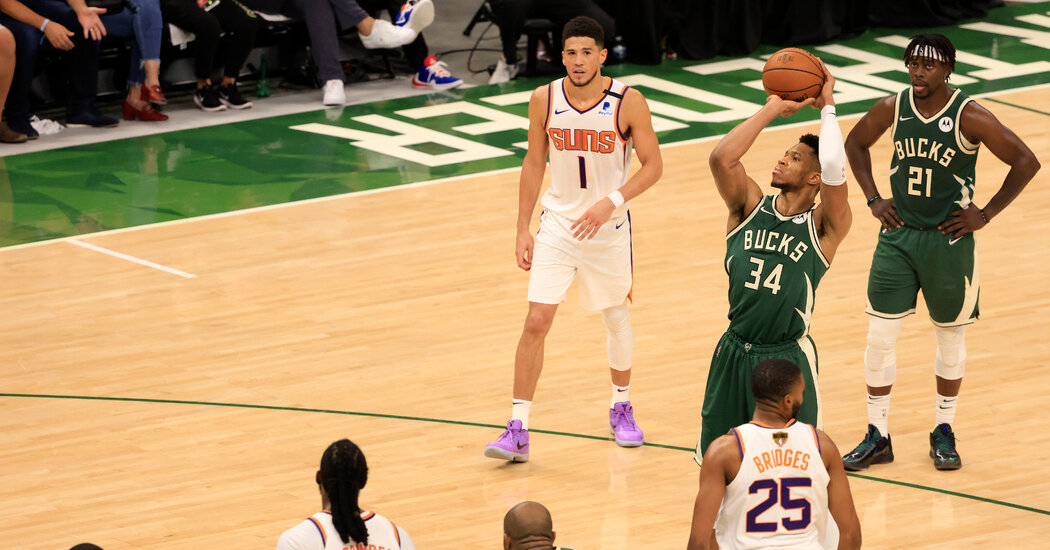 Philip Flory, a college basketball player from Wisconsin Rapids, Wis., is a huge fan of the Milwaukee Bucks. He is rooting for them in the N.B.A. finals against the Phoenix Suns, though Flory has found himself cringing whenever Giannis Antetokounmpo, the Bucks’ do-everything forward and one of his favorite players, tries to do one of the few things that make him look vulnerable: shoot free throws.

“It really bugs me,” Flory said.

All things considered, Flory knows it is a nit-picky grievance. Antetokounmpo, a two-time winner of the N.B.A.’s Most Valuable Player Award, has been outstanding in the playoffs. On Wednesday, he displayed the full range of his skills as the Bucks evened the best-of-seven finals series at two games apiece. He collected 26 points, 14 rebounds and 8 assists and preserved his team’s 109-103 win with a preposterous late-game block on the Suns’ Deandre Ayton.

But as the series shifts back to Phoenix for Game 5 on Saturday, Antetokounmpo is returning to the scene of the crime — the small crime he committed against free throws at the start of the series.

In the first two games, both losses for Milwaukee, he combined to shoot 18 of 30 from the line as the Phoenix fans heckled him, counting the seconds that elapsed — “Seven! Eight! Nine!” — before he finally released each attempt. Free throws have been a persistent challenge for Antetokounmpo, who has made just 56.8 percent of them this postseason.

Flory, a 6-foot-5 forward, is uniquely equipped to assess free throws: He has never missed one as a college player. Last season, he made all 41 of his attempts at the University of Wisconsin-Stevens Point, a Division III team that played an abbreviated nine-game schedule because of the coronavirus pandemic. At the same time, Flory understands that the circumstances are slightly different for Antetokounmpo, the atmosphere more charged.

“You’ve got people screaming, waving their hands — there’s a lot of distractions,” Flory said. “But he puts so much time in and has an amazing work ethic. There’s no reason he can’t be a more consistent free-throw shooter.”

Antetokounmpo, of course, is not the only N.B.A. star who has toiled at the stripe. Shaquille O’Neal was a famously poor free-throw shooter. And just a few weeks ago, Ben Simmons of the Philadelphia 76ers managed to turn his postseason foul shots into carnival rides, sinking just 34.2 percent of them before the 76ers were eliminated in the Eastern Conference semifinals. (Simmons is now the subject of trade speculation.)

The strange thing is that Antetokounmpo is a 71.7 percent career free-throw shooter, which is enough that he should not be a liability. But his percentage has typically dipped in the playoffs. Last week, he acknowledged that he was aware of the crowd’s high jinks in Phoenix and said that he needed to “embrace it and have fun with it.”

Antetokounmpo had more fun at home in Milwaukee, where the crowd serenaded him with “M.V.P.” chants and he made 13 of 17 free throws in Game 3.

“And that’s one of the reasons they won,” said Don Kelbick, a basketball skills instructor and former college coach based in Melbourne, Fla.

Kelbick was cautious not to overanalyze Antetokounmpo’s issues because he had no direct knowledge of the Bucks star’s thought process. But when good players have such clear problems, Kelbick said, the issue is “not so much technical as it is mental.” Antetokounmpo shot 4 of 8 from the line in Game 4, though the Bucks won anyway.

“You have to be confident enough that you know how to do it — and just let it go,” Kelbick said. “I have a feeling that he’s trying to place the ball in the basket, which never works.”

The key to success, Flory said, is repetition. He gets to practice early so that he can take dozens of form-focused shots about three to five feet from the hoop. “Nice and close,” he said. He is conscious of how the ball feels on his fingertips and pays attention to his follow through, making sure that the ball does not drift to the left or to the right. He tries to swish every shot.

Eventually, he moves back to the free-throw line for about 50 attempts. And after practice, he takes 50 to 100 more.

His routine is the same every time: one deep breath, two dribbles, then the shot. The entire sequence takes about three seconds, he said. He does not want to be at the line forever.

“If you spend too much time there, you think about too much,” he said.

In fact, Flory avoids stationing himself at the line during games before he needs to. Instead, he said, he meanders out to the 3-point arc to “socialize” with his teammates and confer with them about defensive assignments or their next possession — anything to keep his mind off the free throw itself.

Antetokounmpo, on the other hand, is at the line for so long, he should be paying rent. Even before he receives the ball from the referee, he rehearses his form. He would be wise to eliminate the clutter, Flory said.

Flory’s process has been highly effective. His perfect record from the stripe includes his freshman season as a preferred walk-on at Seton Hall (6 of 6) and an injury-marred sophomore season on scholarship at Albany (2 of 2).

During a college career hindered by a series of chronic injuries, Flory has had three surgeries on his left foot and one on his right. Finally healthy, he enrolled at Wisconsin-Stevens Point and played well last season, averaging nearly 21 points and 6 rebounds a game. Toward the end of the season, opponents became aware of his free-throw streak.

“I started to get heckled,” he said.

He blocked out the noise, he said, by leaning into his routine and keeping the process simple. Easy, right? Not for everyone, not even for the very best.