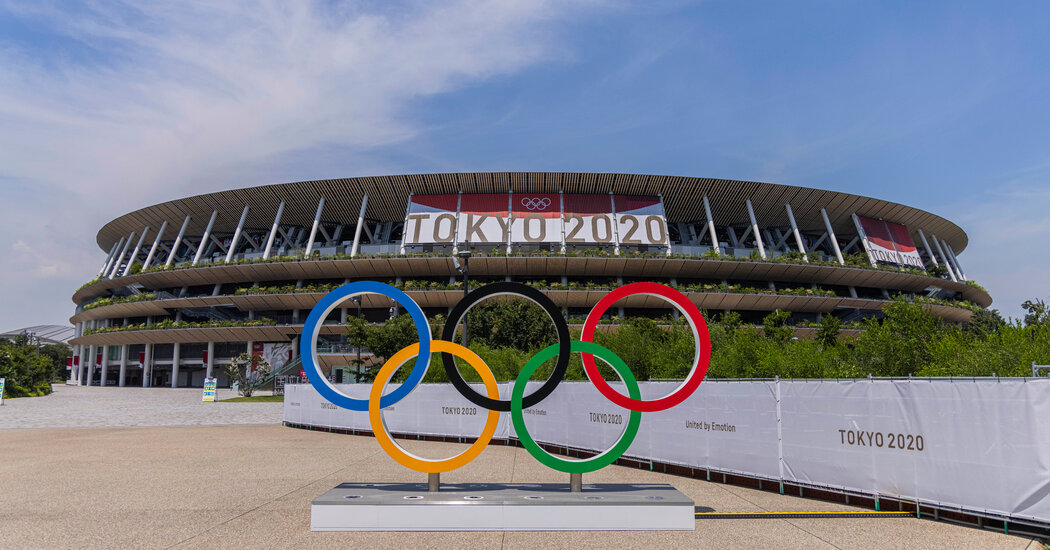 TOKYO — Friday brings what is usually a celebratory highlight of any Olympic Games, the opening ceremony. The pageantry, speeches and the athlete parade will play out as usual, but very likely without the zest and excitement of a typical Olympics.

Most notably, the stands will be virtually empty, and the athletes of the world will be waving to television cameras rather than a stadium full of fans and dignitaries.

To top it off, whatever spectacle is planned will be undercut because Kentaro Kobayashi, the creative director of the ceremony, was dismissed Thursday after video emerged of him making fun of the Holocaust.

In the United States, NBC has typically held the broadcast of the ceremony until the evening, but this year it can be seen live at 6:55 a.m. Eastern. The traditional tape-delayed prime time showing is at 7:30 p.m., and there’s a third chance to see it for night owls at 1:38 a.m. Saturday.

Friday is officially Day 0 of the Olympic Games, and while there isn’t a lot of athletic competition to go with the opening ceremony, there is a little more than zero.

Archers will have their qualifying day to determine the seedings when the competition proper begins. And there will be preliminary heats in some rowing events.

Take a breath. A deluge of sports, from table tennis to yachting, is coming for 18 straight days starting on Saturday.

After a yearlong delay, the opening ceremony for the Tokyo 2020 Olympics is almost here. But with social distancing and no fans, the ceremony, much like the Games, will look a lot different.

When is the opening ceremony?

How can I watch it?

NBC will have a live morning broadcast of the ceremony starting at 6:55 a.m Eastern time, marking the first time the network has ever had a live morning broadcast of the event. Savannah Guthrie, the anchor for “Today,” and NBC Sports’ Mike Tirico will host NBC’s coverage. The ceremony can also be streamed on the NBC Sports App and on NBCOlympics.com

Who is leading Team U.S.A. in the Parade of Nations?

One of the highlights of the opening ceremony is the Parade of Nations. U.S. women’s basketball player Sue Bird, who has won gold four times, and baseball player Eddy Alvarez, a 2014 silver medalist in speedskating, will be the flag bearers for the United States and will lead the delegation of more than 230 U.S. players. (There are 613 athletes total on Team U.S.A.)

“It’s an incredible honor to be selected the flag bearer for Team USA,” Bird said in a statement.

Alvarez, too, said he was humbled by the selection. “It is an honor and a privilege to be named as one of the flag bearers by my fellow Team U.S.A. athletes for the opening ceremony. Being a first-generation Cuban-American, my story represents the American dream,” Alvarez said.

What are some of the changes to the ceremony this year?

Athletes will parade through a largely empty Olympic Stadium in Tokyo, as spectators have been barred from most of the Games. Performers at this year’s lineup have not yet been announced. And NBC has no plans to add background noise that mimics the fans in the stands throughout the Games, NBC Olympics executive producer Molly Solomon said during a call last week. That’s a departure from last year, when most broadcasters would pipe in recorded fans for games during the pandemic.

The opening ceremony comes at a time when games have already been underway in Tokyo, and anxieties about the virus are high. Tokyo’s infection rate hit a six-month high. Adding to that anxiety is the flurry of announcements about Olympic participants testing positive, including those inside the Olympic Village.

Other news has also overshadowed the event in recent days.

On Thursday, organizers of the Games dismissed Kentaro Kobayashi, the creative director of the ceremony, after video footage emerged of him making fun of the Holocaust in a comedic act in the 1990s.

Mr. Kobayashi’s dismissal followed the resignation of the composer who had written music for the opening ceremony, after excerpts from interviews he had given in the 1990s confessing to severe bullying and abuse of disabled classmates surfaced on social media.

There is less than a day to the opening ceremony, and the Tokyo 2020 Olympics are abuzz. Athletes are at training venues working to get in any last-minute tweaks before the start of their competitions, officials are checking to make sure everything is safe and secure, and volunteers are running around to make sure things go smoothly. Our photographers bring you an inside look at what it has been like to be on the ground.