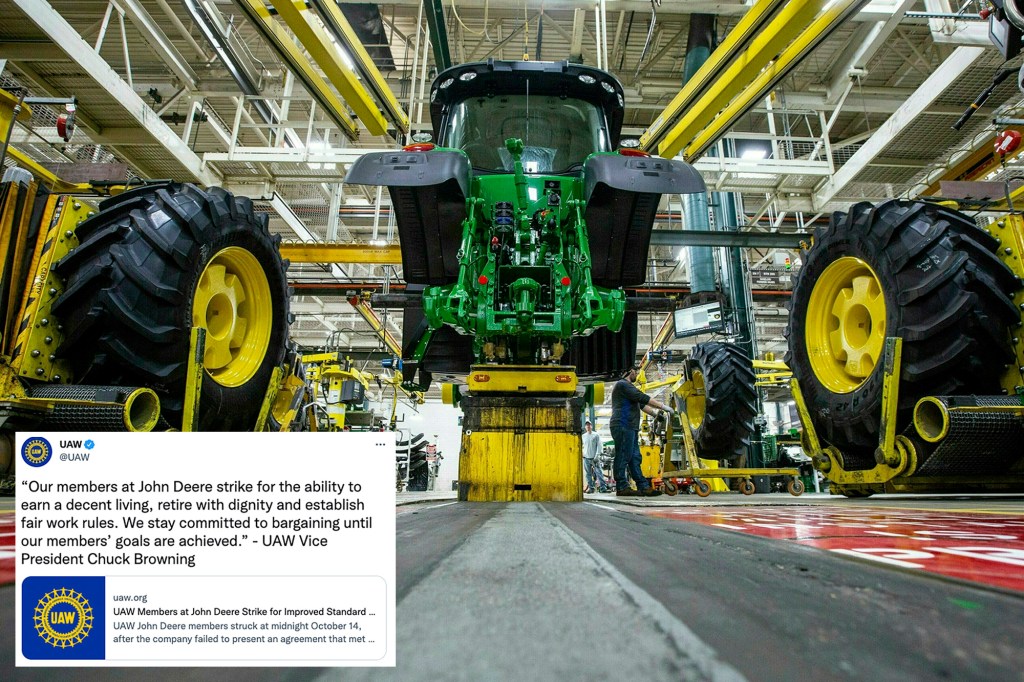 More than 10,000 John Deere workers went on strike Thursday after rejecting a contract proposal from the company.

The workers are represented by the United Auto Workers union and the strike affects members at 14 Deere & Co. facilities across the US, the company said in a statement.

“Our members at John Deere strike for the ability to earn a decent living, retire with dignity and establish fair work rules,” Chuck Browning, director of the union’s agricultural department, said in a statement. “We stay committed to bargaining until our members’ goals are achieved.”

About 90 percent of the union’s members voted down the company’s contract proposal earlier this month. On Sunday, the union set the Thursday strike deadline if another agreement could not be reached.

The UAW’s negotiators said the company’s proposal included “substantial hard-fought gains,” but it wasn’t enough for rank-and-file workers, who roundly rejected it.

“These are skilled, tedious jobs that UAW members take pride in every day,” said Mitchell Smith, UAW Region 8 director. “Strikes are never easy on workers or their families but John Deere workers believe they deserve a better share of the pie, a safer workplace, and adequate benefits.”

The strike comes five months after Deere & Co.’s stock hit a new all-time high of just over $400 per share.

The stock’s since fallen about 20 percent to $330 per share, but it’s still up over 22 percent this year, outpacing the broader market’s gains.

The company has posted record earnings throughout the pandemic, and in August it said it expects to turn a record profit of almost $6 billion this year.

“John Deere is committed to a favorable outcome for our employees, our communities, and everyone involved,” said Brad Morris, vice president of labor relations for Deere & Co. “We are determined to reach an agreement with the UAW that would put every employee in a better economic position and continue to make them the highest-paid employees in the agriculture and construction industries.

“We will keep working day and night to understand our employees’ priorities and resolve this strike, while also keeping our operations running for the benefit of all those we serve.”

The strike comes amid a wave of worker unrest about 19 months into the pandemic as companies grapple with a nationwide labor shortage and current employees take advantage of their increasingly strong bargaining advantage.

Last week, production at Kellogg’s US cereal plants ground to a halt as the company’s roughly 1,400 US factory workers went on a nationwide strike over pay and benefits issues as well as alleged threats from the company to move production overseas.

Workers at Mondelez International, the company behind Oreos and other snacks, also went on strike earlier this summer.

And a Hollywood union that represents about 150,000 off-screen workers has voted to authorize a strike that threatens to bring the industry to a halt. If an agreement isn’t reached by Monday, the union said it will strike.